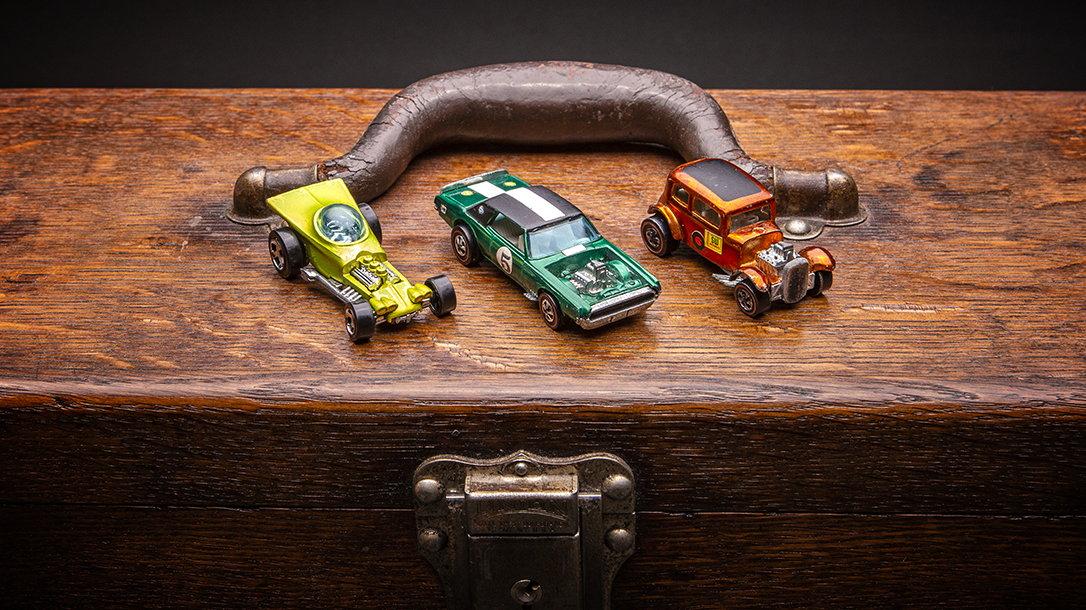 In our series “The Collector,” we travel the globe in search of the most interesting acquisitions on the planet. Check out our pieces on halloween masks, the world’s largest pinball machine collection, the golden age of comic books, and even collecting GI Joe toys. And here’s our piece on being a Hot Wheels collector:

Can you hear it? Shh! Listen … can you hear it now? The crowd is chanting your name. The engine is revving up, the tires are spinning and smoking on your 1987 Buick Grand National. All of this is happening in the palm of your hand while you’re holding your little Hot Wheels car. Now seriously, stop and think about it before you roll your eyes and turn the page. Hot Wheels toy cars are truly timeless. They have been making children’s imaginations race around the world all the way to adulthood. They motivate us to eventually get the actual car of our dreams, or maybe become a Hot Wheels collector.

Being a Hot Wheels Collector

The Hot Wheels brand has revolutionized the toy car game. It also has inspired mechanics, gearheads and manufacturers to make real-life variations of some of the concept cars we have seen produced by Hot Wheels. Some of my favorite things about collecting Hot Wheels are the toy cars’ attention to detail. The minimal room they require to collect, and that they are extremely affordable.

There are not too many collectibles out there that offer such a level of detail, yet are as inexpensive as having a sandwich from your favorite deli. (OK, there are some Hot Wheels that are as expensive as a steak dinner, and some are even as expensive as a real corvette, but we will get to that shortly.) The average Hot Wheels car can probably be found for a buck or two. Then, as we get into the collectibles, the prices go up to the tens and hundreds of dollars. Of course, the really desirable ones cost thousands or more.

Now, before we get into the collectors’ realm of the how and the why, let’s look at the history of Hot Wheels.

Elliot Handler and his wife Ruth co-founded Mattel, the toy company that created Hot Wheels. One of the things that blew my mind is that not only did Elliot Handler create one of the most iconic toys of all time for boys (girls can play too), but his wife Ruth created the Barbie doll. Barbie is one of the most iconic toys for girls (um, I guess boys can play too). Elliot wanted his toy cars to be the best and the closest thing to a real car as you could get. He hired a General Motors car designer and a rocket scientist to design them (how fucking genius is that?) From there, the Hot Wheels brand was created.

One of the first things you need to remember if you’re buying Hot Wheels is to buy what you like! It’s supposed to be a hobby, so buy what catches your eye or even get the car of your dreams. But if you’re looking for truly collectible Hot Wheels cars, Redline Hot Wheels are the most desirable. The “Redline” designation comes from a red stripe around the tire. This was done during roughly the first 10 years of Hot Wheels production (1968-1977).

Now, there are a few things to know about Redlines, as this can get confusing. During the Redline years, Hot Wheels were sold worldwide. They were manufactured in two places — either in America or in Hong Kong. The place of manufacture was printed on the bottom of the chassis. If they say anything other than those two countries of origin, then they are not a true vintage Redline. Hot Wheels brought back the Redline tires in the mid-1990s.

I’m not going to bore you and go into the details of all 220 Redlines. Personally, I go after any Redlines that are still in their packages. These, in my opinion, will always be the best investments, as the cars are still minty fresh. The other Hot Wheels I go after are the oddities. Oddities are often described as concept cars, such as a model called the Open Fire (with six wheels and the engine sticking out of the hood). Another is the 1972 Sidekick that was only made for one year in Hong Kong. It has an engine on the left side of the car where the person would normally sit. The driver’s side on the right.

The next piece of advice to follow is to go ahead and purchase those sports cars and luxury cars that average, middle-class working Joes could not afford unless they remortgaged their houses. How bad would you want to kill to own a Ferrari 308 and drive around like Magnum P.I., or to have a 1977 “Smokey and the Bandit” Trans Am? Well, by collecting Hot Wheels you can have them, and in the palm of your hand.

Maybe you’re too classy to drive around in a sports car? Consider instead a vintage Mercedes Benz, Rolls Royce or even a classic Lincoln Continental.   The point I’m trying to make is that you cannot go wrong with any of the same choices you would make in the real-car world. Here is the best part: You don’t have to worry about oil changes. You don’t have to worry about gassing up the car, heading to the car wash or passing your state inspection!

Remember folks, buy the Hot Wheels you like and enjoy the hobby. I highly recommend watching the YouTube video on the “Million Dollar Hot Wheels Collection.” It features the famous Hot Wheels collector Bruce Pascal (who owns the $150,000 Pink VW Beach Bomb minivan). If that video does not make you believe that there is money in Hot Wheels toys, then I don’t know what will. When I used to watch “The Suze Orman Show,” she had a segment that was called “Can I Afford It?” Whenever people came on the show to ask if they could afford a luxury car, she automatically said they were wasting their money. Cars are a losing investment. While she may be partially right, just know that Hot Wheels are the only cars that you can buy and enjoy without worrying about losing money on.

The Hot Wheels collection featured in this article was courtesy of Charlie Elliott, Picket Post Antiques. If you like this story, we have more awesomeness in back issues of Skillset Magazine! Check it out at  outdoorgroupstore.com and make sure to listen to our podcast Skillset Live.