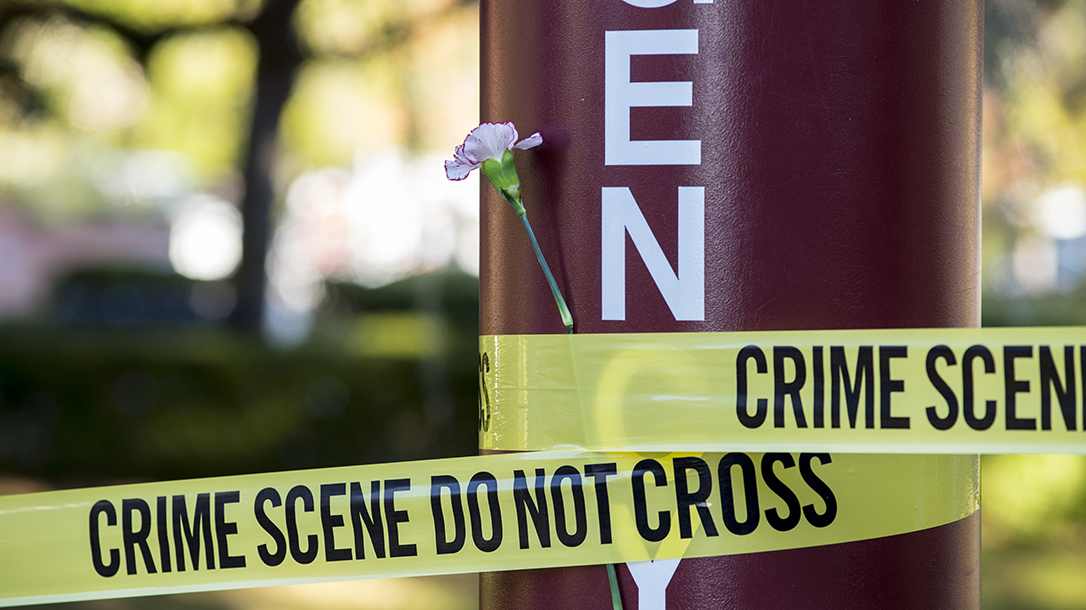 Every law enforcement officer knows that some days are nice and easy and others are a complete train wreck. Officer Alan Horujko of the Ohio State University Police, unfortunately, encountered one of the worst days on duty imaginable nearly five years ago. Sometimes bad things happen with very little advance warning, and hopefully in those moments, officers’ training will allow them to achieve the best possible outcomes.

Recently, I had the pleasure of seeing Officer Horujko’s presentation on what he experienced. At the presentation, Horujko was awarded for his actions and bravery during the Nov. 28, 2016, attack at Ohio State University.

Horujko explained that on that particular day of the week he normally works the evening shift, but he agreed to work a day shift for one of his colleagues. A call came in from an OSU building of a possible gas leak, so Horujko headed there to help with the evacuation. The Columbus Fire Department was already on scene and had parked their rig near the end of the one-way street. Students were in the area around OSU’s Watts Hall milling about while the CFD turned off the fire alarm and called off HAZMAT. The CFD found a small leak caused by a faulty valve, which was then mitigated. Afterward, the CFD pulled away from OSU, leaving behind a battalion chief to monitor the scene. Everyone waited for the gas to dissipate so they could return to a normal day.

Horujko sat in his squad advising dispatch of what had transpired when he heard a car’s engine revving. Seconds later, he heard a crash. In his mind, Horujko thought it must have been a normal traffic accident; they happen almost daily with the amount of foot, bike and vehicular traffic at the university. Horujko immediately looked up at his rearview mirror and saw a neon flash. At the time he couldn’t tell what that was, but he later found out it was a campus security officer being struck and flipped into the air. The neon was his high-vis traffic vest.

Horujko quickly turned and saw an older model Honda Civic plow into a group of students, hitting at least seven or eight of them. He immediately called in a vehicle-versus- pedestrian accident. He thought a possible drunk or maybe an older, medicated person had lost control of their car and struck the students.

Immediately, Horujko followed the “OODA loop”—observe, orient, decide and act. Horujko drove his squad to the area and parked it in between the Honda and the injured to provide protection. Then he ran to the Honda, which had struck a concrete barrier and lost its front wheel, but the engine was still racing. The door was open, and no one was inside.

Next, he heard screaming coming from close by and ran toward the sound. As he sprinted to the screaming people, he heard someone yell, “He has a machete!” Horujko saw at least 50-60 students on the sidewalk, so he took out his weapon and continued to approach the area. He then saw the bad guy, who looked very much like the other students. There was no flashing sign, no arrow pointing out, “Here he is!” However, Horujko had a gut feeling when he saw him that this individual was the attacker, and he recognized the difference between predator and prey in that instant. The bad guy was running away from Horujko, swinging his “machete” (it was actually a butcher knife) at everyone in his path.

Both the attacker and Horujko were in a mad dash, and each ran like men possessed—one with murderous intent and the other bound by duty to protect all those innocent students who were still reeling from the accident and chaos that had ensued.

Horujko was able to call “10-3, 10-3 (emergency), man with a machete!” as the assailant lashed out with the knife as he ran. The bad guy had a 40-yard head start, but Horujko began to close the distance. As he got within 30 yards, Horujko saw the attacker head to a student who was sitting on a bench. For Horujko, a sense of “time dilation” hit him; things slowed down, and he looked beyond where the bad guy was headed. He thought of taking a shot, but there were so many other students still running in the same area. If Horujko were to miss his target, someone innocent might die.

The student on the bench appeared unable to fully assimilate the threat he faced. He could see the bad guy coming at him, knife overhead, but he did not even try to get out of the way. The student just stood up and was struck with such force that Horujko thought it must have killed him.

The attacker continued to move, making a right. Horujko saw him, but again, there were at least 15 students who were looking out of a window directly behind the maniac from where Horujko was positioned. Many students were also running around, trying to find a safe place. Horujko was able to move laterally, essentially flanking the bad guy, and he yelled, “Drop the knife!”

The assailant looked at Horujko, slowed and started to run directly toward him. Horujko drew on his training, mindset and purpose at that critical moment; he planted his feet firmly onto the ground and again commanded, “Drop the knife!”

Horujko doesn’t remember pulling the trigger. His thoughts had turned to his fiancé and to making it home to her alive. His measured double tap from roughly 70 feet struck dead center. The rounds hit the heart and lung, but the bad guy did not stop and continued running at him. Horujko moved to the left and fired another round, striking the attacker’s arm that held the knife. This slowed him, but he still didn’t stop. Now within mere feet, the assailant dropped to a knee and took a lunging swing at Horujko with the knife. Horujko leveled his weapon and fired one more time, striking the bad guy right in his head. This finally dropped him.

While he is normally very calm and relaxed in demeanor, Horujko felt nothing but anger at that moment. His day had gone from a relaxed OT shift to—in the span of only 52 seconds—having to end the rampage of a knife-wielding attacker hell-bent on destruction and murder. Horujko kicked the knife out of the suspect’s hand and called for medical aid and additional backup. The CFD, which had left only minutes before, immediately arrived back on the scene. Twenty seconds later, additional law enforcement backup arrived as well.

Horujko saw that this area was now protected, and his thoughts turned to the original vehicular assault. He then sprinted back to that scene in front of Watts Hall. When he arrived, he wasn’t prepared for what he saw. It was like a ghost town—no noise and people just frozen in place. Horujko was experiencing auditory exclusion from the high stress of the previous minutes, and the only sounds he recalls were the sirens of the police backup and other first responders.

The CFD battalion chief who had stayed behind to monitor the situation had given aid to several seriously wounded students, saving one’s life and saving the leg of another.

Horujko then sprinted back to where he had stopped the maniac. While he ran, he thought, “Is this really happening?” He had only been working on patrol for 23 months.

When he got to the scene, the shift supervisor was there and saw that Horujko was pale and out of breath. The supervisor immediately pulled him out and sat him down. Meanwhile, the alert system reported other shooters and activity that wasn’t really occurring. The campus was in full lockdown, but there was still confusion everywhere. Even though sitting him down was the right move at that time, Horujko felt as though he had been put in the penalty box. He still felt that he should be out there assisting in some way.

Thanks to the quick and decisive actions of Officer Horujko, only 13 students were injured, and the assailant’s death was the single fatality from the incident. Among other well-deserved awards, Horujko’s actions merited the Public Safety Officer Medal of Valor, which was presented to him by President Donald Trump.

During our interview, I asked Alan what his main takeaways from this incident were for other officers. He stressed three main points:

Brian Murphy is a former Marine and retired police lieutenant known for actions at the Wisconsin Sikh temple active-shooter event in 2012. He currently runs the Saves Program for Armor Express ballistic vest company and serves on the Presidential Medal of Valor Review Board.