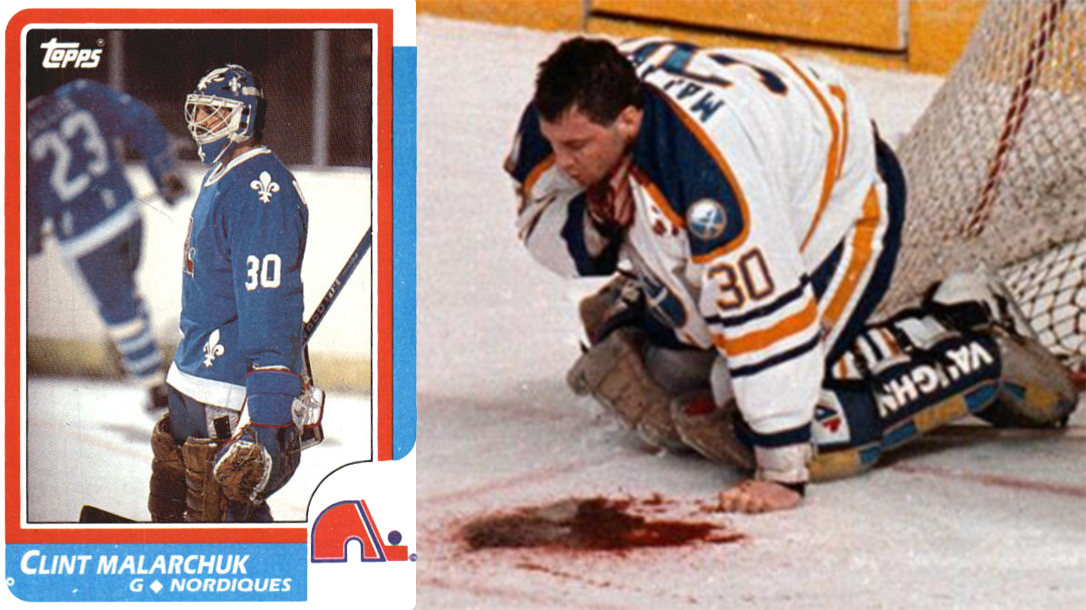 Professional hockey is an inherently dangerous game. Players are trying to keep track of a small piece of vulcanized rubber that can reach speeds of up to 105 miles per hour, potentially right at their heads. And while getting punched in the face by an overly aggressive member of the opposing team is an occupational hazard, it’s far from the biggest threat.

In the heat of the match, it’s easy to forget that these titans of the ice are gliding on pieces of metal that routinely get new edges before the game. We all laughed when Happy Gilmore joked about stabbing someone with a skate, but in real life, it’s a horrifying thing.

Just ask Clint Malarchuk, a Canadian goalie whose career included stints with multiple NHL teams. One of those fresh edges that players love so much sliced open his carotid artery, pouring blood on the ice in a way NHL fans had never seen before – and thankfully since.

Malarchuk began his ice hockey career in junior hockey, playing in the Western Hockey League, later moving up to the NHL at a young age, where he played for the Quebec Nordiques, Washington Capitals, and Buffalo Sabres over 11 years. He would later play for IHL, the National Hockey League’s farm system.

But Malarchuk isn’t most well-known for his 12 shutouts or his save percentage. What his playing career is most remembered for is that time he had his throat cut in the middle of a game against the St. Louis Blues.

On March 22, 1989, Malarchuk was the goaltender for the Buffalo Sabres in a home game against St. Louis. The Sabres were up 1-0 in the first period when the Blues’ Steve Tuttle and Sabres defenseman Uwe Krupp crashed hard into the goal crease. Malarchuk pushed off the goal post to get to the other side.

When he did, Tuttle and Krupp came crashing into him, with Tuttle’s skate held high.

“I felt it hit my mask, but there was no pain, and I didn’t think much of it in that moment,” Malarchuk would later recall. “Then I saw the blood. When you watch the video, it’s hard to really make out, but those first few squirts from my neck? We’re talking five or six feet in distance. That’s how far the blood flew.”

The blade of the skate hit the right side of the goalie’s neck, severing his carotid artery and partially cutting his jugular vein. Somehow, Malarchuk was able to get up on his own power and skate off the ice with the help of a Sabres athletic trainer.

The crowd was visibly horrified at the sight of so much blood loss. Eleven fans fainted in the stands and two of them had heart attacks as a result of the sight. The players weren’t immune either. Three of the players vomited right there on the ice. Trembling could be heard in the voices of commentators Ted Darling and Mike Robitaille, NHL veterans who had seen a lot, but nothing like this.

“I didn’t want to die on the ice, out there in front of all those people,” Malarchuk said. “But the other thing I thought about was my mom watching the game back home in Calgary on the satellite dish.I didn’t want my mum to see me die on TV.”

Malarchuk survived because the trainer who helped him off the ice was a former medic who had served in Vietnam. Jim Pizzutelli pinched the artery until doctors could begin stabilizing his wound. It also kept the goalie conscious in the ambulance. He jokingly asked the paramedics if he would be back for third period.

When word his the arena that Malarchuk had survived and was stable, the game continued. St. Louis would win the game 2-1. He lost 1.5 liters of blood from a wound that required 300 stitches to close – but was back on the ice 10 days later.