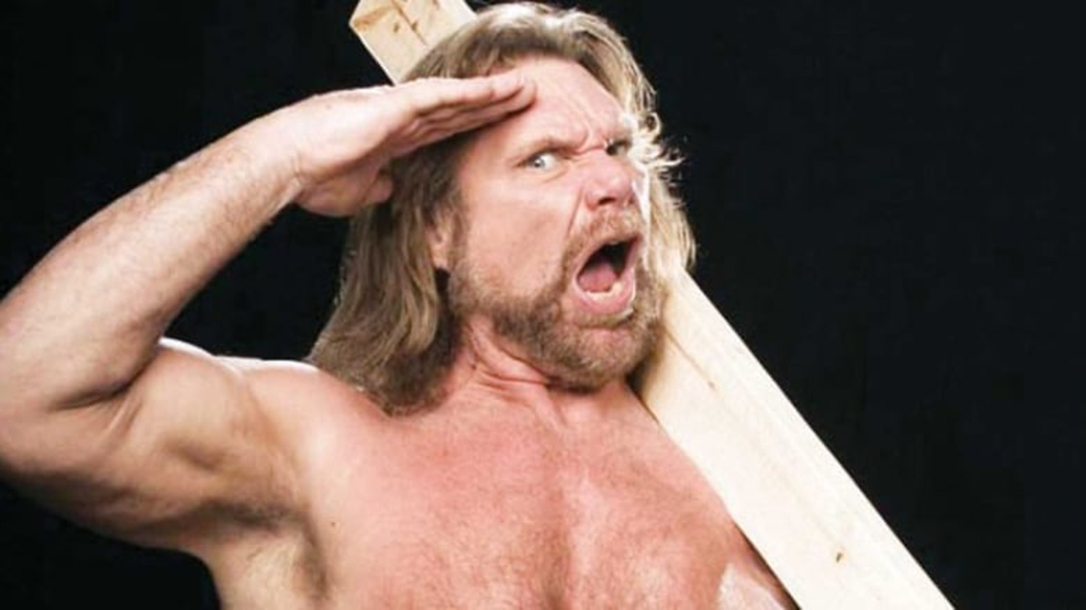 Who could forget the 2×4? Any wrestling fan in the 1980s and ’90s will remember “Hacksaw” Jim Duggan battling it out with the likes of Nikolai Volkoff and Andre the Giant.

Hacksaw Jim Duggan Is My Name

And while the barrel-chested brawler’s wrestling days are behind him, Duggan remains popular with fans. The patriotic pugilist is active on the convention and speaking circuit, recently signed a new merchandising deal, and he even hits comedy clubs to perform a standup act with plenty of tales from inside the ring. Hacksaw recently spoke with Skillset about life in and out of the ring.

From The Gridiron To Life In The Ring

Even from an early age, Duggan was a burly fellow growing up in Glens Falls, New York. A star athlete in high school, he won the state amateur wrestling championship as a senior, and his 1973 school shot put record still stands today. Duggan’s father was the town’s police chief, and Duggan and his three sisters had a loving and supportive family.

“You hear so many horror stories in wrestling about what a horrible childhood they had,” he says. “I grew up in Mayberry. I had a great upbringing.”

On the gridiron, Duggan really shined. Ohio State’s Woody Hayes recruited him, as did Joe Paterno at Penn State. However, Southern Methodist University in Dallas became his final choice, and he served as a captain his senior year.

At the time, Dallas was a hotbed for professional wrestling, with the Von Erich family known throughout the state. The elder of the family, Fritz Von Erich, also played football at SMU. After Duggan’s NFL career flamed out following a preseason injury, Von Erich convinced him to give the squared circle a shot.

The whole concept was foreign to the New Yorker. He idolized Bart Starr and Ray Nitschke, and football occupied his time, not body slams and piledrivers. “I was just so consumed with football, I had never watched professional wrestling at all,” he says. “It was a huge gift Fritz Von Erich gave me because back then, if you weren’t related to someone in the wrestling business, you didn’t get in. So, here was a total outsider that knew nothing about wrestling, and Fritz opened up the door for me.”

“Big Jim” Duggan first entered the ring in 1979 before traveling with various promotions around the country. Originally a heel (a bad guy), Duggan was clean shaven and wore a gold robe to the ring. That didn’t go over with fans. He then wore a mask and wrestled as “The Convict.” Again, no response. Neither did growing his hair and beard long and calling himself “Wildman” Duggan.

But the all-American “Hacksaw” Jim Duggan persona eventually resonated with fans. He’d spend 36 of his 40 years in the ring as Hacksaw. By 1987, Duggan debuted in the WWF (now WWE) and became one of the biggest stars of the ’80s and ’90s, squaring off with stars like Andre the Giant, Ted DiBiase and “Macho Man” Randy Savage.

“I’ve wrestled in every state in the union, every province in Canada and 30 different countries,” he says. “It’s amazing the appeal of wrestling. Nobody knows Tom Brady down in Christchurch (New Zealand), but they go ‘Hooooooo!’”

Memorable Matches And Looking Back

While he may not have ever been world champion, Hacksaw was a fan favorite throughout his WWE career. In 1988, the company introduced the Royal Rumble, and Duggan came out the winner. The event remains one of the WWE’s biggest pay-per-views each year.

Headlining Madison Square Garden with Andre the Giant remains a major highlight for Duggan. Growing up, his father took Duggan and his sisters to the famed arena to see the circus. It seemed surreal to be on the marquee himself.

“As an adult, you can only imagine to pull up in front of Madison Square Garden and see ‘Hacksaw Jim Duggan versus Andre the Giant’—it was the thrill of a lifetime,” he says. “No matter what profession you’re in, if you sell out the Garden, you sell out the Garden. We had over 22,000 that night, and it was an honor to be in there with Andre, that’s for sure.”

Duggan underwent many surgeries throughout his career, including rotator cuff, shoulder, knee and wrist surgeries. And while wrestling cards may be scripted, cracking a major league roster is highly competitive. For every superstar, there is a long line of dreamers.

“There are about 1,200 NFL football players this year,” he notes. “And 500 NBA basketball players. There are only 100 WWE wrestlers. It’s a television show, and it’s more competitive than sports.

“And it’s not just kids from America, you’ve got kids from Japan, Australia, Europe and all over the world coming after your spot. It’s a big business—dog eat dog. And if you’re not up on top, some kid’s got your spot. It’s hard to stick around.”

With so much time in the spotlight, many wrestlers fall victim to the pitfalls that come with fame. For the most part, however, the business has been good to Hacksaw. “I’ve never had to go to rehab for booze or drugs,” he says. “I did a lot of both, I can’t throw stones, but I just never got addicted and no felony arrests. There were a couple misdemeanors, but it was the ’80s—hooooooo! Back then, people tried to compare us to other sports teams. We were more like a rock band—flying all over the world, a lot of drugs, a lot of booze, a lot of women. It was a lifestyle, and a lot of people got caught up in that lifestyle.”

Duggan’s opponents exemplify his longevity in the wrestling game. In his heyday, the grappler regularly squared off with Dusty Rhodes, “Cowboy” Bob Orton and DiBiase— then another generation of all three.

“In the WWE, I wrestled Dusty’s kid, DiBiase’s kid and Orton’s kid. I say, ‘first I beat up the old man, then I beat up the kid.’”

While he may be retired from in-ring action, Hacksaw remains busy. He makes appearances and signs autographs, and as mentioned above, he even does a standup show regaling fans with humorous tales from the ring. Before the pandemic, that included a tour of Australia, New Zealand and Fiji.

“It’s amazing at this stage of my life I’m still able to make a living from what Vince McMahon did for me because in the 40-plus years I wrestled, I only worked for Vince a short time,” he says. “So many people say what a villain and how horrible Vince is, but I have no hard feelings for Vince McMahon. The guy was my boss; he wasn’t my friend.”

Duggan is also involved with the Pro Football Retired Players Association (PFRPA) and takes part in some of its charity events. Hacksaw admits he’s a bit more of a “hack” when it comes to the golf course, but he is a regular in celebrity charity events—even

keeping his trusty 2×4 in his golf bag when he needs a “wood.” He and his wife now live in South Carolina where they also operate a 10-acre hobby farm.

As the son of a cop, Duggan grew up around firearms. His father wasn’t a hunter, but he taught Hacksaw gun safety and enjoyed some target shooting. That now includes an old .357 he’s had for years, as well as other handguns he has collected. He also recently participated in country singer Lee Brice’s celebrity sporting clay shoot benefitting the Folds of Honor. Duggan has also been a part of the Variety Telethon for 20 years. The Iowa event raises money to help underprivileged children.

In 2011, Duggan was inducted into the WWE Hall of Fame. Despite being retired for almost a decade, he is still recognized by fans around the world. Hacksaw recently signed with the Wrestling Collection to market and distribute updated Hacksaw-related merchandise at hacksawduggan.com. Fans can even order a signed 2×4—hooooooo!

Four decades in the wrestling business has produced a nice life and some great friends for Duggan. While the media often focuses on some of the negative aspects of the industry, he says that wrestling can be a great career. “So many folks see that dark side of wrestling, and they hear all the horrible stories about wrestling and some guys who’ve had some bad luck,” he says. However, Duggan notes, “It’s been a great business for me.”