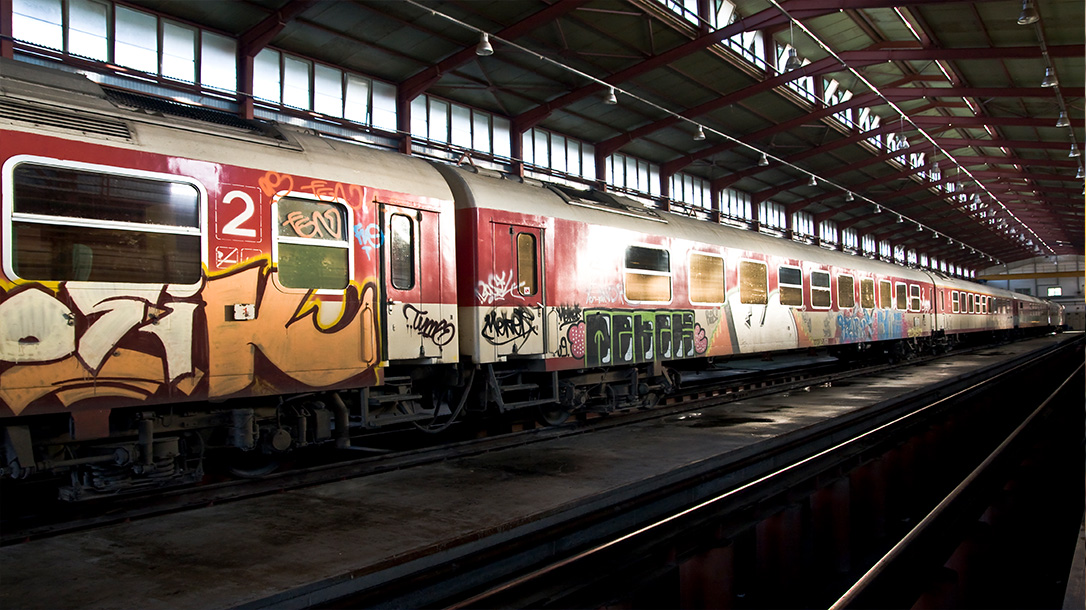 Most people look at spray paint-covered walls and see nothing more than a blight on the community. An eyesore that lowers property values and screams crime. However, to a small group of passionate people, graffiti is an art form and these trains are a huge part of it.

Train Graffiti Is An Art Form

All of us have seen it, the long train holding up our daily commute on its way to distribute goods across town. It’s then we notice it, train car after train car of illegible painted moving murals passes by our eyes. We never really think about where it comes from, who creates it, what it says, or most importantly, why trains?

Long before freight trains across the nation became covered in graffiti, inner cities from coast to coast lay covered in street art. As hip-hop music flooded the block in the early eighties, street art in New York City subways took on a life of its own. At one point the subway car painting was so out of control, cars were taken out of service and repainted instantly due to a new mandate on cleaning up the city. The war on graffiti had officially begun.

Almost overnight, the birth of graffiti trains took hold, it was art in motion across the nation. Some of these artists were motivated simply by the thought of their work being seen by thousands of people. Other artists loved the idea of painting something that wasn’t permanent, resulting in them being more free for creative exploration. Others simply love the adrenaline rush that comes from doing something that’s illegal and dangerous.

Breaking The Law for Graffiti

The frigate and passenger trains as well as the train yards they reside in are all private property. Sneaking out at night armed with duffel bags full of cans of spray paint, tape, and yes even bolt cutters. Scaling barbed wire fences or even after long hikes through dark moonlit forests with only a headlamp to guide them, all to paint a train. Most wear dark clothing and protect their identity with facemasks and bandannas, as painting trains come with heavy penalties. Charges can range from vandalism, destruction of property, criminal mischief and you guessed it, trespassing. Arrests and fines are all part of the game and sometimes come with long-term jail sentences.

Then there is the deadly part of painting trains. In the U.S. alone a person dies from being hit by a train every three minutes, that’s a staggering number to think about. Whether hopping the tracks, squeezing between the cars, or climbing on top of them, the risks are high. Even if they cheat death, chances of encountering a train yard operator who doesn’t share the appreciation for the artform is extremely high. The risk of receiving a good old-fashioned beatdown vs facing the authorities is definitely a real concern for graffiti artists.

Speaking of high costs, what about the price of paint itself? It’s not cheap to purchase 100 cans of quality paint, tape, and other tools to complete the job. Most of them simply do it for the love of the art it seems, they just want to leave their mark on the world by bringing themselves their own little slice of happiness. Artist inspiration comes from a passion most of us will never experience.

The graffiti scene has a long and storied history that has spanned more than 40 years and has definitely left its mark on American culture. “Trainspotting” has become a favorite pastime of artists and admirers alike. Some see it as a way of preserving the hard work the artists have created. Others collect and share photos online so that thousands of admirers around the globe can share in seeing something otherwise unattainable. There are even trainspotting locations that have become well known for allowing groups of people to gather just to watch the trains go by.

So next time you’re stuck in traffic due to a freight train, maybe you’ll look at the graffiti on it just a bit differently. Perhaps it will inspire you to go home, pull out some paint and maybe Bob Ross a little portrait of your own. Or maybe you’ll just shuffle the Spotify playlist to a RUN-DMC song, and help pass that wait time a little easier.