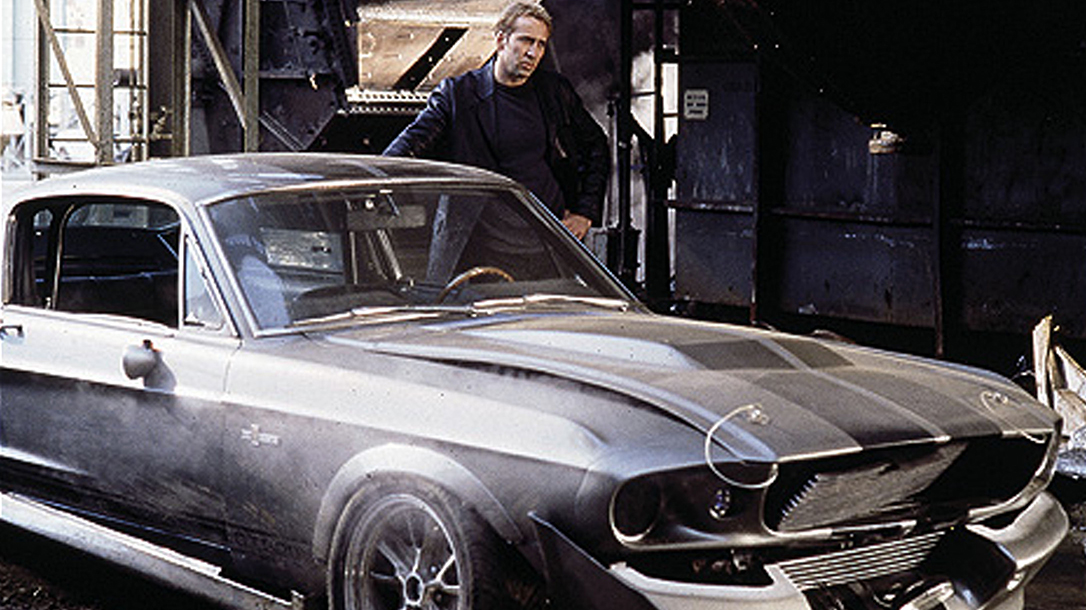 Lots of us who have siblings have at least one who is the “problem one,” some of them pretty spectacular. But this one’s hard to beat: you are a retired grandmaster car thief, but your little brother is still in the business and doesn’t have remotely your brains or skill. He blows a heist and leads a whole posse of five-oh right to a giant stash of stolen cars now under the nominal ownership of a Russian mob czar. Said czar is none too pleased with this, and puts the little brother in a car which he then puts in a giant hydraulic crusher but holds off on the actual crushing in favor of calling the retired older brother and announcing that he has 72 hours to go steal a laundry list of 50 exotic cars unless he wants Flat Stanley as his eventual best man.

Thus starts “Gone In Sixty Seconds.” Well, the second one, anyway: the first movie came out in 1974 and did well, well enough to merit a remake in 2000. That guy, H. B. ”Toby” Halicki, went balls-out, and got hurt a number of times in the filming, to include damn near destroying his spine in the final jump. To further show you the man’s absolute level of dedication, he managed to full-on get himself killed in a stunt scene in his own 1989 remake. Anyway, in the 2000 version, the older brother is “Memphis” Raines, played brilliantly by Nicholas Cage.

Of course, his character wants his little brother to retain all three dimensions, so Raines puts together his old team of seasoned pros and they come up with a plan. Part of the plan is that every car gets a female code name. Raines decides that the last car on the list will be the ’67 Shelby Mustang 500. He code names that one “Eleanor.”

Eleanor is seven separate kinds of sweet. Sixty-seven was a particularly good year for American performance car styling, and some would say the best year of all for Mustangs. Champaign gold, a stance like a predator. And this one had a big-block, with the Grammy-winning combination of high-rise cam and dual-chambered exhaust.

One of the defining action scenes of the movie comes when it looks like Raines is finally getting wrapped up. He has squad cars swarming after him like he’d just whacked a hornet’s nest with an axe handle, and far more problematically, there’s a helo. Helos are fast. They have a hell of a view. And they are generally ill-tempered.

But you have to love an indominable spirit and a good script. He slides into one of California’s famous concrete rainwater containment causeways and slams the accelerator, with all of Hell’s Hornets just behind and above him. Besides the symphony of the Shelby motor, we get the radio traffic: Stay with him, Air One. Response: I’m all over him. The tach needle rising, and a flickering glance down: a toggle switch with a red safety cover with the word near-luminous

word “nitrous.” He throws the switch and a red light comes on over the heartwarming legend “armed.”

And then we finally get to see the iconic inscription around the shifter. It reads: “Go Baby Go.” Cage tags it.

The Shelby surges forward like it’s been rearended by a brakeless dumptruck downhill from Denver. Report from the helo: “Suspect has increased speed to 120! 140! 150! 160! And finally: “He’s gone!”

You might think that was the climactic moment of the movie. Not when you have a director who is big into climactic moments. No, the best was yet to come. Raines is headed for the docks. He’s working the manual transmission as if his clutch hits and shifter effort were actually propelling the car.

High RPM and spinning squadcars and the roar of exhaust and he blows under a banner reading “South Harbor Shipyard.” So close, but yet, so far. Stuntmen diving out of the way, end loaders barely missing. Of course, whoever platted the shipyard had plenty of severe humps in the roadway, such that every car passing gets plenty of daylight under all four, Duke Boys take note. Then, the inevitable arrives.

Of course, there HAD to be a jump.

He’s on a bridge, and it’s jammed up with a wreck, emergency vehicles. And it’s the only way in. But there is a flatbed tow truck. You guessed it: its ramp is in the “down” position.

Rising RPM, ramp ever bigger in the windshield and then . . . the moment. Arcing, epic, impossible.
Cage wins.

You can’t have read this far without already guessing that Movie Car Guy Brian Grams had to have one. There were arguably eleven or twelve originals (one source says 13), all built by Cinema Vehicle Services. Three of those were functioning cars, the rest just rolling bodies.

Despite his enormous vehicle-glomming ability, he couldn’t land an original one. But because he is tight with CVS, they gave him a kit to build a perfect clone. Which he duly did.

So, if you actually owned one of these, would you 1) simply put it on display and go to Quizno’s, or would you 2) go out and drive it like you were off your meds and you’d actually stolen it?” If you guessed Answer 2, you’d be right. Brian’s Eleanor was a built 428 dual-quad car, balanced,

blueprinted, with a four-speed. He projects the horsepower right about 650. He took it as something of a moral imperative to drive the jehosephat out of it, rocker exhaust roaring, dual- quads wide open, clutch sidestepped, tires sublimating. That’s what the public would want.

As any experienced gearhead will acknowledge, no matter how well-built the motor is, there is only so much of that you can do before entropy comes a’callin’. In a spectacular moment, he ended up putting a hole in the block the size of the Welland Canal. He simply put in another built 428, which resides in the car to this day, albeit with less of that behavior.

As regular readers know, Brian has a staggering collection of movie cars. As much as we at Skillset admire them all, if we could get all Memphis Raines on only one of them, this one would be it. GoBabyGo