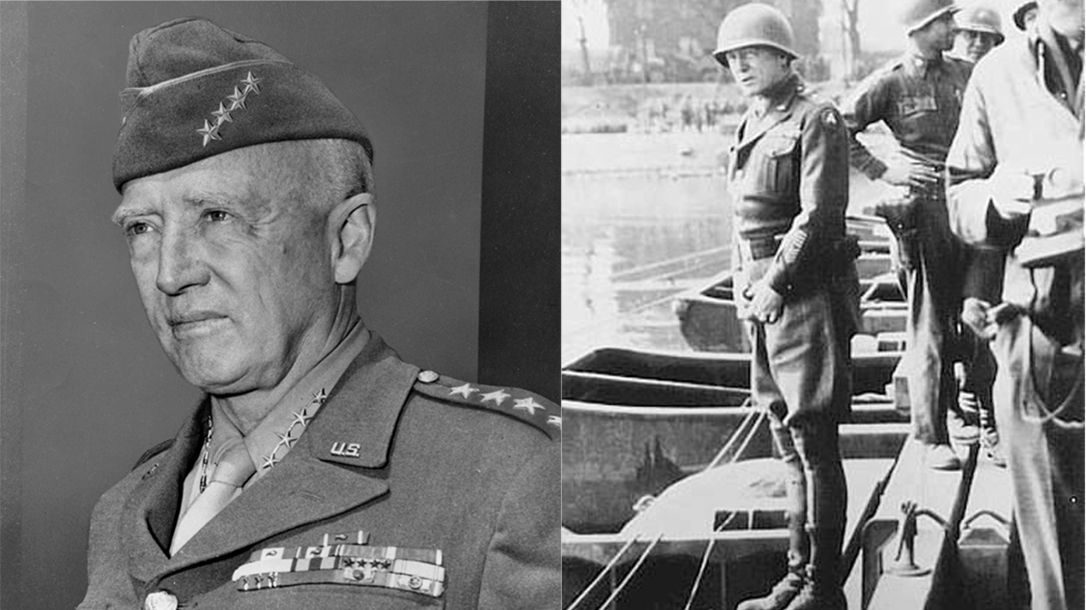 Rare History: The Day General Patton ‘Marked His Territory’ At The Rhine

Gen. George S. Patton was one of the big successes of World War II. He was one of the key players in accelerating the close of the war in Europe. It is also widely known that Patton’s personal style of commanding troops was fueled by egotism, pride, a sense of entitlement. He employed a tremendous amount of humor and vulgarity to earn the love of his soldiers. It is written that even his beloved dog Willie had a bust of Hitler for the pooch to urinate on when he traveled with the general. Back in those days, the press was different than today, and they used greater discretion to protect the privacy and reputations of generals and other American leaders during the war. While Patton’s “blue” humor and language certainly entertained his troops and the press, it also caused headaches for his bosses and the military’s press censors.

“I am a soldier. I fight where I am told, and I win where I fight.”

According to the Modern War Institute at West Point, Patton liked to “give it to them double dirty.” When he wanted his men to remember something of importance, he laced it with plenty of profanity. As he put it, “You can’t run an army without profanity; and it has to be eloquent profanity. An army without profanity couldn’t fight its way out of a piss-soaked paper bag.” Not all of Patton’s contemporaries agreed with him on this point, however. The Modern War Institute also notes that “Some officers found his use of obscenities … disappointing, viewing it as unprofessional conduct. Patton’s one-time subordinate and later superior, Gen. Omar Bradley, was critical of his use of vulgar words and phrases.”

Either way, while Patton’s personality and genius as a leader carried him through the history books, not much has been written about the day he relieved himself into the Rhine River. According to History on the Net, a week before the Rhine crossing and his ceremonial pee break, “Patton had held a press conference in which he delivered a classic performance, mixing the humorous, provocative, and the profane.” There, he revealed that the Third Army was nearing the capture of its 230,000th prisoner of war. Patton had earlier sought to photograph the face of the 200,000th prisoner for publicity. However, his request was refused on the grounds that the Geneva Convention pertaining to the humane treatment of POWs disallowed their exploitation. “This time,” Patton brashly declared, “we will take a picture of his ass!” Patton also proclaimed that he would “piss in the Rhine in a week.”

“Say what you mean and mean what you say.”

On March 24, 1945, Patton approached a newly constructed pontoon bridge over the Rhine that his troops had placed two nights before and a Third Army division had already crossed. The Rhine itself was symbolic of the entrance into Germany from Western Europe and had historically stood as a natural barrier against invasion. It is reported that Patton claimed that he hadn’t urinated the morning of his crossing of the Rhine so as to have a full bladder for the event.

Upon his arrival, the general strode halfway across the bridge before suddenly halting. “I’ve been looking forward to this for a long time,” Patton quipped. He then unzipped his fly and proudly urinated into the Rhine while the troops present laughed and a U.S. Army photographer recorded the moment for the history books. The stream that left the general’s fly, however, was later edited out of the official press photographs. Afterwards, Patton sent a dispatch to Allied Supreme Commander Gen. Dwight D. Eisenhower that read, “I have just pissed into the Rhine River. For God’s sake, send some gasoline.”

Patton had many gifts, but diplomacy was not one of them.

While stationed in Germany as the occupational governor of Bavaria after the war’s end, he criticized the process of denazification. He felt it was important to keep some former Nazi party members in positions of political, administrative and governmental power to keep the lights on and to help get the defeated country moving again. Both his press statements questioning the denazification policy and his public comments about taking on the Soviets next led Eisenhower to remove him as the U.S. commander in Bavaria. He was then transferred to the 15th Army Group, but in December of 1945, Patton suffered a broken neck in a freak car accident and died less than two weeks later.

Patton’s wartime legacy and his profane eloquence will never be forgotten. He was a leader of unwavering conviction who was undoubtedly the right person at the right time in world history to help save the world from tyranny. His exploits both on and off the battlefield are legendary, and even after his death, colorful stories about him arose. It is actually rumored that Patton’s wife put a Hawaiian curse on his ex-mistress shortly after the general’s funeral and that the paramour died within days. But that is a different story for another time …

If you enjoy articles about military history, check out our Top 5 Reasons Why The Nazi Party Would’ve Never Won WW2 and get in the conversation on our social media pages!