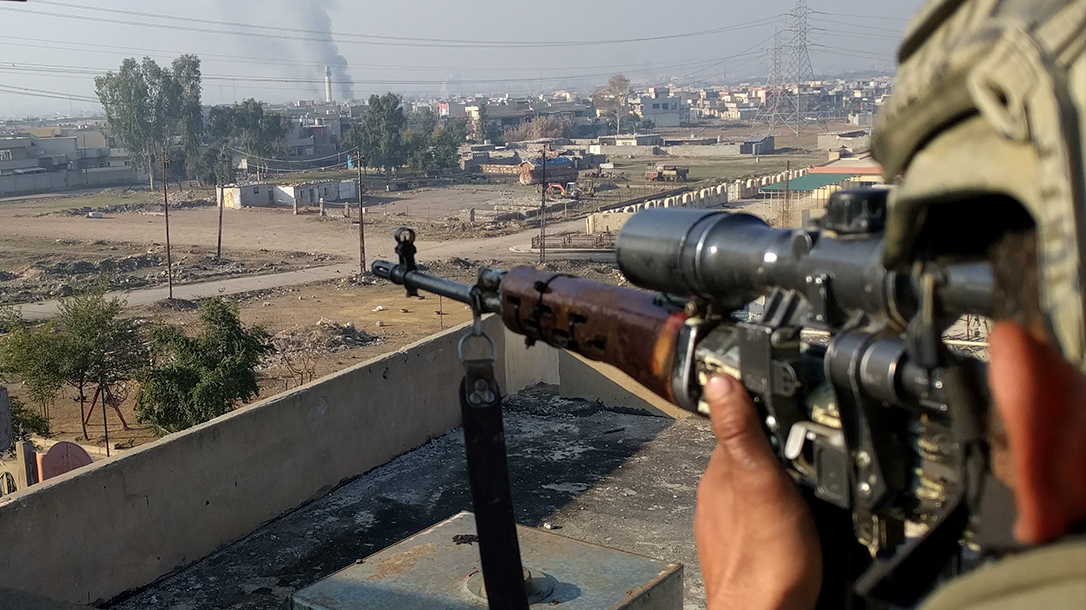 An ERD sniper provides cover as troops bound across an open area.
(Photo by Mitch Utterback)

Here, author Mitch Utterback returned to Iraq alone and reunited with his former Iraqi special operations teammates to document their fight against ISIS in the Islamic State of Mosul.

Brig. Gen. Abbas, ground force commander of the Iraqi Ministry of Interior’s Emergency Response Division (ERD), and his deputy Col. Omar walked down the street in the al-Mithak district of East Mosul showing me the dead ISIS fighters.

“They are very young,” Abbas said.

“These two are Chechens,” he said, pronouncing it “She-shans.”

“Uh-huh. With suicide vests,” I said.

We were glad to see these four bearded, raggedy-ass shitheads lying twisted and dead in the street. The day before, a drone-fired missile was requested by the advancing ERD. It was always satisfying to see dead ISIS fighters (or pieces of them) in Mosul, especially after what we had recently witnessed.

Two days earlier, civilians being used as human shields by ISIS attempted to flee toward advancing government troops. Men, women and small children hurried in the direction of the forward elements of the ERD.

He had barely finished the sentence when his radio came to life with urgent calls from his men.

“Daesh is shooting at civilians with mortars and snipers. There are many wounded,” he said, then immediately switched back to Arabic.

Abbas ordered his men to rescue the civilians under enemy fire and bring them to his location in their armored Humvees. Additionally, he told his medical unit to send every available ambulance and prepare the aid station for mass casualties. ERD Humvees arrived a few minutes later. Consequently, it was now a casualty collection point. ERD troopers, most of them husbands and fathers, were shaken by what they saw. So was I.

A man exited the vehicle in a blood-drenched white sweater holding his daughter, who was no more than 4 years old. The child in pink pajamas was limp — with a jagged, four-inch piece of mortar shrapnel sticking out of the left side of her head. It was her blood soaking her father’s sweater. Barely able to stand from the soul-shattering panic he was experiencing, he handed his child to the ERD who rushed her to an ambulance. It raced to the aid station as the Humvee carrying her parents followed.

More Humvees arrived from the scene of the ISIS attack on their fleeing human shields. Civilian vehicles carrying victims were stopped outside the casualty collection point and quickly searched. The ERD knew ISIS could send a SVBIED (suicide vehicle-borne improvised explosive device — a car bomb) to attack them in the chaos that was unfolding.

Security waved forward a pickup truck with four adults in the back, each severely wounded. As it passed, I got a close look at them. Based on their injuries, I did not think they would make it. I found out later they did not.

Once the casualties were evacuated, Brig. Gen. Abbas turned his attention back to the enemy. He called on his radio for the location of the snipers and mortar team that had attacked the civilians. He got good intel from his forward positions and told them to pull back slightly, but to keep eyes on target. Abbas then established contact with the three helicopter gunships he had been working with all day. What happened next could not have been more motivating — even if Wagner’s “Ride of the Valkyries” or AC/DC’s “Thunderstruck” had been blasting from loudspeakers on the helos.

The Iraqi Army Mi-28 Havoc came in first, alternating between rocket and machine gun fire on the ISIS positions. As the Mi-28 pulled off target launching flares, ISIS ground fire tried to bring him down. ERD spotters called in the location of the enemy small arms fire. Abbas passed it to the two Iraqi Bell 407s coming in behind the Mi-28. Additionally, the 407s carried rockets and machine guns which made steep, diving runs on their new targets. The three helos repeated their attacks several times — with less ground fire coming up after each sortie.

The pilots and the ERD observers on the ground reported numerous enemy KIAs to Abbas. He thanked the pilots for their work. They in turn thanked him for the mission and said they were out of ammo and returning to base. It was almost dark.

“Mustafa, we will go to the aid station now,” Abbas said. He used the call sign he had given me in 2007 when I was his advisor.

Inside the building Iraqi medics were attempting to stabilize those still alive. They prepared them for transport to a higher level of care in the nearby town of Bartella. They worked by the light of headlamps in a cold room without electricity. I switched on my helmet lights and noticed the bodies of four adults covered by blankets on the opposite side of the room – the men from the pickup truck.

The tragedy of war is that it uses man’s best to do man’s worst.Harry Emerson Fosdick

Outside was something even more heartbreaking. Near the entrance to the aid station four dead children were laid, covered by a blanket. Several of us knelt and removed our helmets. One of the ERD gently turned down the blanket and uncovered their faces. The girl in the pink pajamas was there, the shrapnel removed and her head bandaged. All their eyes were still open.

The ERD troopers said a prayer in unison. I quietly said the goodbye, “Fee Amanillah,” to the children.

Be Safe With God

I stood up and looked for Brig. Gen. Abbas. In the darkness outside, I could hear him talking. I found him standing alone, his security detail close by. They said he was calling in drone strikes on Daesh, who thought it was now safe to move around in the open.

For another hour, Abbas processed his grief by using his radio to kill more of those responsible for the dead in the aid station. The drones were silent, could see in the dark, and struck with cold, unsympathetic accuracy. Abbas also knew the more enemy he killed, the greater the chances civilians and his own men stood of surviving the next day.

It was a quiet, sullen night at the ERD safehouse. After dinner, Abbas and his staff bade me goodnight, then each of them called home for the comfort that comes from hearing the voice of a wife or a child.

I spent several days with the ERD as they pushed into Mosul from the southeast, seeing intense urban combat each day. During that time, ISIS attacked them with multiple SVBIEDs as well as with commercial drones modified to drop 40 mm rifle grenades. The Iraqis called these flying robot snipers “Tieyara,” and they seemed to fear them more than the SVBIEDs. The Iraqis brought every weapon to bear against them they could, and were successful about half the time in shooting them down.

I told Brig. Gen. Abbas I could happily spend my whole trip with him, but I needed to rejoin the Iraqi Counter Terrorism Service (ICTS) who were now asking when I was coming back to their unit. He understood and thanked me for the kept promise of returning to Iraq.

Early the next morning, Abbas was off to the front and I caught a ride to the ICTS safehouse from one his guys, with me providing directions. I’m not kidding. I knew the way and literally facilitated my own handover between Iraqi units inside Mosul. No convoy, no security detail, no air cover, no freqs, no call signs — just two dudes in a pickup truck —albeit wearing the uniform of the ERD.

Back at the ICTS safehouse were just the cook and a few admin soldiers. Brig. Gen. Haider, Col. Arkan and the boys in black were already out running and gunning for the day. I changed out of my ERD multicam, donned the black fatigues of the ICTS and caught up on social media and posting on my war blog.

That night as I ate with Haider and Arkan, they told me about all the action I had missed, including a river crossing at night that allowed the ICTS to ambush ISIS as the sun came up. Even more remarkable, Arkan said, were the 26 IEDs visible in daylight the ICTS commandos had not tripped in the dark during the river crossing and while establishing their ambush positions.

Stay In the Fight

I couldn’t help thinking how far these guys had advanced in terms of capabilities since I left Iraq in May 2008. For example, they were doing everything on their own and doing it well, such as fixed-wing close air support, helicopter close combat attack, recovery and repair of vehicles during battle, bulldozer assault supported by tanks and mechanized ground troops, night infiltration and daylight ambush in ISIS territory.

Furthermore, they were establishing liaisons with adjacent units and conducting humanitarian assistance in liberated neighborhoods. They were even getting hot chow to the troops while under enemy fire. It all left me convinced that those of us who had served in Iraq had actually accomplished some important things.

I told Brig. Gen. Haider I would keep telling the story of Iraqi heroism and accomplishment I had witnessed firsthand, thanks to him and Brig. Gen. Abbas.

My Last Day in Mosul

During breakfast with Haider and Arkan on my last day in Mosul, Haider asked when I’d be back. I told him the same thing I had in Baghdad in 2008.

“Inshallah, I will be back soon, brother,” I said.

Overhearing our moment of seriousness, Arkan wisecracked, “Yeah, but come back with a bigger team next time. No more of this Jason Bourne stuff!”

We all had a good laugh and it was time to part ways again. Outside I said goodbye to Haider, Arkan, Ibrahim, Rasul, Mohammad, Maitham and the rest of the team. They mounted their vehicles and rolled toward another day dedicated to liberating the oppressed citizens of Mosul from Islamic State occupation. You have just been in the company of heroes, I thought to myself as I watched them drive away.

This article is from a previous issue of Skillset Magazine. Want more? Grab a digital or physical copy at OutdoorGroupStore.com.