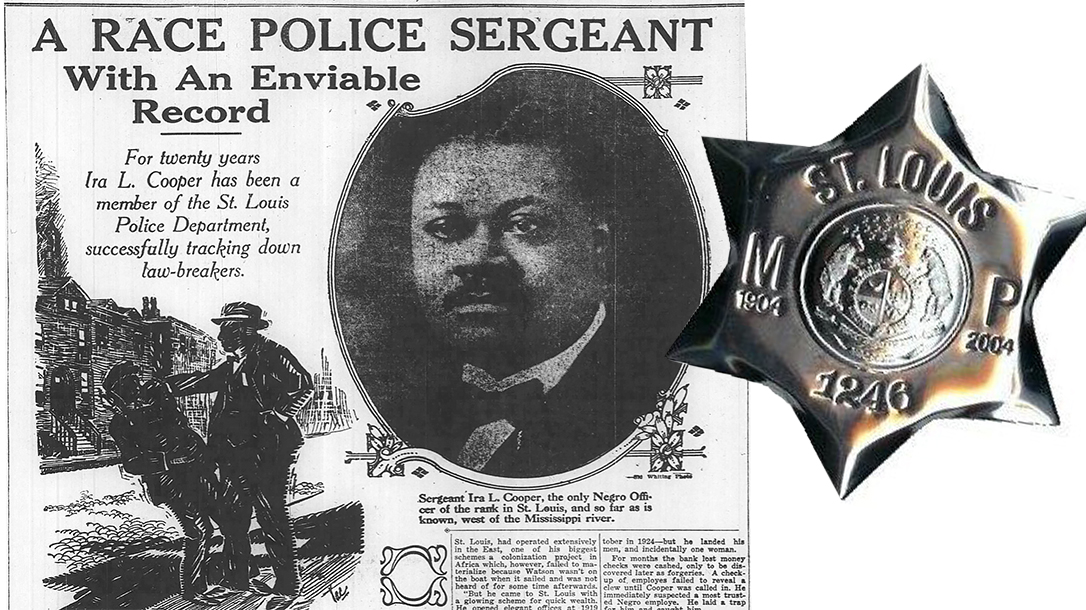 Newspaper articles from decades ago sporadically documented the major cases of police Lt. Ira Luther Cooper, the first African American promoted to detective, sergeant and lieutenant on the St. Louis Police Department during the early 1900s. They told of how a soft-spoken, intelligent man used his wit, reason and a vast network of sources and informants to develop investigative leads on high-profile cases. Some examples of these cases involved the kidnapping of an Anheuser-Busch heir. The murder of a sheriff, the pick-pocketing of a Chinese ambassador at the World’s Fair and others. He was one of only four Americans at that time who received an award from Scotland Yard for his efforts.

Raised in Mexico, Missouri, Cooper earned a master’s degree in optometry but later joined the police department. A year after he was hired in 1906, he was promoted to detective for his ability to develop leads others could not. Always with an open ear listening to street chatter and gossip, he built rapport with citizens and cultivated sources and informants, which provided him the reputation as the cop to solve cases.

On New Year’s Eve 1930, a masked gunman ordered the driver out of a limousine and kidnapped the 13-year-old grandson of August A. Busch, the president of Anheuser-Busch Brewing Company. In less than 20 hours, Cooper developed information about the suspect and his family and influenced them to convince the suspect to release the boy unharmed. The boy was released, and the suspect was taken into custody without incident.

In years prior, Cooper had ended the Gas House Gangs’ series of kidnappings. Armed with information from the streets regarding an abduction, he grabbed one of his 16 detectives and hovered in the shadows on Bayless Avenue. Patiently, he waited and watched for any movement. Eventually, the door opened, and a crew carried a man to a car. The crew then left but returned a short time later carrying the man back inside. Cooper assumed they were trying to confuse the victim, pretending to transport him to several different locations.

Outnumbered, he and his detective cleared from the area. However, needing more accurate intel on the location for the future raid, Cooper returned with three more detectives and watched again until he could confirm the victim’s identity, develop a pattern of the suspects’ behavior and reconnoiter the area. He left and briefed a large team of others. Loading into seven cars and caravanning back to Bayless Avenue, they raided the building, saved the victim, seized three pistols and a shotgun, and arrested seven men and one woman. Thus, the Gas House Gangs’ kidnappings ended.

During the World’s Fair, a Chinese ambassador to America had a priceless family heirloom lifted undetected from his pocket. This investigation fell directly within the jurisdiction of the St. Louis Police Department. Cooper eventually recovered the watch. For his actions, he received an award from the city and a thank you from the family of the ambassador in the form of a box of tea every year.

Another time, while investigating a robbery involving four suspects fleeing in a vehicle with Illinois state tags, Cooper deduced the suspects were probably staying in a hotel and needed a garage to hide the vehicle. There was only one hotel with a garage in the area. Within three hours of the robbery, he had two suspects in custody.

During his investigation the Stickney jewelry case of 1924, Cooper developed information about a driver for the company who inadvertently told stories of the expensive jewelry to two men who became the prime suspects. They were arrested for the theft of $15,000 in jewelry, the equivalent of $220,000 in today’s market. Aside from robberies, Cooper once stood down a blood-thirsty lynch mob calling for the head of his white prisoner. He also assisted with the murder investigation of a sheriff and obtained the killer’s confession.

Cooper retired for health reasons and passed away in 1939. This was just months after ending his three decades of protecting the public. He was eulogized as St. Louis’ greatest police officer.

For more stories about badasses through history like Ira Cooper, listen to our podcast Skillset Live!  Get in on the conversation on our social media pages or pick up a back issue at OutdoorGroupStore.com!