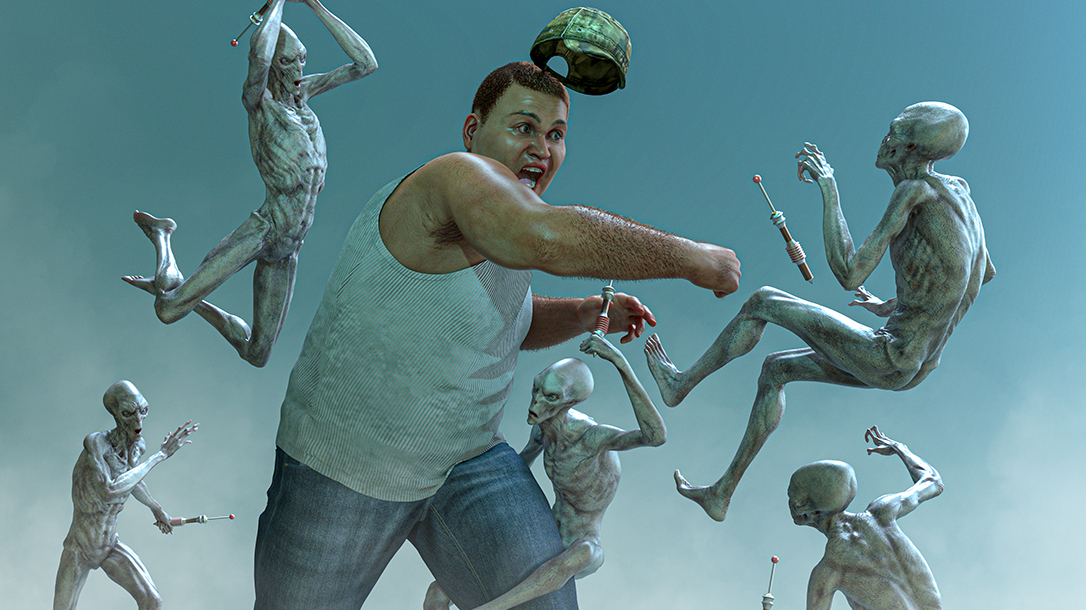 Remember when you were a kid and the best possible thing would be to come face to face with an alien? We’re talking about the cool aliens, like E.T. or the good guys from Galaxy Quest, not the acid-spitting friends of Sigourney Weaver. You would fantasize about seeing a UFO, getting beamed up and flying across the cosmos like in The Last Starfighter.

Then we grew up and maybe came to believe that aliens have actually been here, but only in the distant past. Who else would have built the pyramids, made the crop circles or given us the plotline for Stargate?

Then, as if 2020 wasn’t weird enough, 2021 brought with it the revelation that UFOs were in fact real, and the Pentagon even released information about them. In one news cycle, we all went from looking at Roswell, New Mexico, as just another tourist trap to believing every single one of Joe Rogan’s theories. And we didn’t even need to take DMT.

But after we got over the initial giddiness of possibly meeting an alien, we realized that there is a good chance that this could go very poorly for us. That we could get beamed up, probed or even worse—we could be forced to watch reruns of The View and then forced to try to explain Joy Behar.

The truth is that an alien invasion has been a concern for mankind since the dawn of time. Although this may have happened in the past, today the fear of alien abductions is on the rise, and there is no telling when our beloved planet will be attacked. Potential alien invaders most likely know that humans are intelligent beings capable of science and technology, but they probably also realize that we require assistance in certain regards, such as interstellar defense or understanding what “woke” means.

An alien abduction could happen anytime, anywhere, so if you happen to be chosen for an unwanted trip to space, it is vital that you pay heed to these handy tips we have assembled from the best parts of the internet and too many hours spent watching Ancient Aliens.

In the worst case, you will never be seen again, and you won’t be able to blame us. As for the best case? You will have literally found a whole new world of friends, and you can tell them all to subscribe to Skillset. So, in no particular order, here are our best recommendations for surviving an alien abduction …

Do Not Panic And Go With The Flow

Let’s face it, getting freaked out doesn’t do anyone any good. Because alien abductions often occur in isolated areas, it is likely that you will have little choice but to fend off the sticky-fingered xenomorphs all on your own. Your yellow belt in jiu-jitsu probably won’t help you much against laser beams or eight arms, so if you do get teleported into the sky, by remaining calm, you will be less likely to anger or confuse the aliens, and you may escape with your life.

It is important to note that alien abductors are seen more often at night. We’re not sure why this is so, but our guess is that those big eyes just can’t handle bright light. So, if you come face to face with E.T.’s distant cousin, blast them with lots of lumens. Flashlights have multiple purposes in self-defense situations, some of which are allowing you to see your opponent clearly and helping you to locate items that can be used as weapons or as distractions. Rocks (which can be thrown at aliens’ heads), beer bottles (which can be broken on surrounding objects and used to slash aliens’ dimply, grayish, left-too-long-in-the-fridge-looking chicken flesh) or any other items that seem useful may save you in an extraterrestrial abduction scenario. Likewise, all that bar fighting training you got from watching Road House nine times could apply here. Just maybe, this is the time not to be nice.

Always Have A Camera

Bringing a camera (or a smartphone) will also allow you to document when and where alien interactions occur near your home or other locations. Planetary defense specialists might even be able to use your photographic evidence to plan humanity’s response to an outright invasion. We have all seen the really bad, grainy photos of supposed aliens or spaceships, so don’t be that guy. You have one job—pack sufficient megapixels and bring back some dope shots.

Evidence suggests alien abductions are extremely unpleasant experiences. According to some reports, alien abductees have undergone painful medical procedures, psychological torment or, in extreme cases, they have received alien implants. And then there is all that butt-probing stuff. The best thing you can do mentally to cope with this trauma is to meditate and quickly find your way to a happy place. Maybe concentrate on that vacation you took in Thailand or that time in your glory days how you scored four touchdowns in one football game and won the very last city championship trophy that Polk High had. Build yourself a mental fortress, and there will be no Vulcan in the galaxy that can melt your mind.

Be Out Of Shape

It is possible that alien abductions are a form of human experimentation. The aliens’ motives are unknown, but abduction could be a way to mine our bodies for genetic material, or it could be that alien races need our bodies as incubators for growing their own replacement organs. Therefore, embrace your dad bod. Have that second double bacon cheeseburger, drink like a Marine and forget about CrossFit. If those galactic bastards are going to use your disaster of a body for whatever nefarious ends, make them work for it. However, if you are an especially poor physiological representation of humankind, they may even pass you over entirely and instead snatch someone with less cellulite from the next farmhouse over.

To be honest, any reports from those lucky few who have survived alien abductions are always a little suspect, so we have absolutely no idea what may go on during your round trip across the cosmos. You may be able to bribe your way off the Star Destroyer with a Snicker’s bar and a six pack of Natty Light (see tip #5), or you may come back with a head full of oatmeal. It’s really a toss-up. Either way, it will be one hell of a story, and we can’t wait to hear it!