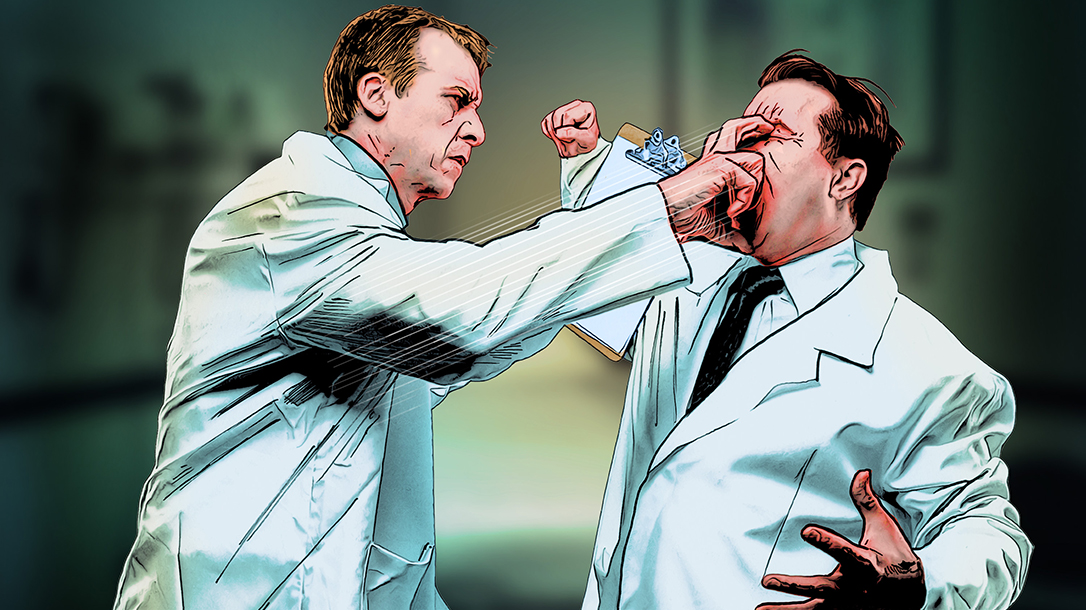 Doctors make the best super villains. Think about it, we have Dr. Evil, Doctor Doom, Dr. Dre and that asshole who just gave me my prostate exam. Unfortunately, I had a recent, three-day stay in a hospital, and it seemed like doctors from every department poked, prodded and drew blood just because they could. One hack in scrubs drove a stiff finger into my back right where it was the sorest and asked, “Does this hurt?” As if my cringing wasn’t a clear indication.  Afterward, as I laid there in agony, I started drifting off into a drug-induced state of mental clarity. It was then that I realized doctors have hidden combative abilities that should be shared with the loyal readers of Fight Club.

Remember, doctors spend hundreds of thousands of dollars on and years in medical school just to learn how to become rubber-gloved perverts with clipboards. Through three painful days of espionage, silent research and self-sacrifice, I have learned several of the tricks of their pain-inducing trade. Only now, after a week of debating with myself, have I decided to share with you what are quite possibly some of the most intense and lethal secrets of this industry.

Author’s disclosure: At the risk of divorce, jail time or gunshot wounds, these extremely effective, medical-grade techniques must never be practiced at home.

In this scenario, Dr. McCoy is having a heated argument with his colleague Dr. Kardashian in their medical center break room. Thanks to his intensive training, Dr. McCoy recognizes the aggressive posturing of his nemesis and is able to deflect his attacker’s pre-emptive strike with his clipboard while simultaneously thrusting his stiffened fingers into Dr. Kardashian’s eye with the accuracy of a Visionworks office assistant. Yes, it’s true; in most Fight Club articles the outcome is clear and shows an obvious winner quickly disassembling an aggressor. However, Dr. Kardashian has also had some intensive training. Using a specialized trauma recovery technique, Dr. Kardashian uses one arm to gauge distance while keeping his guard up as he recovers.

Using his remaining good eye, “Dr. K” recognizes that Dr. McCoy is prematurely celebrating his victory over him, creating an opening.

Martial arts legend has it that a good thrusting palm strike can drive a nose bone into the brain. If you watch a lot of television, like I do, you will know that this theory is total bullshit. However, if you have ever caught a palm to the schnozzle, you already understand that it hurts to holy hell and can stop an average attacker, allowing victory and escape to safety.

Being a highly experienced gynecologist, Dr. Kardashian knows not to make the same mistake that his foe has made. Without delay, our combatant swiftly delivers an ear-drum-destroying double palm slap to both sides of Dr. McCoy’s head. When delivering this strike, it is important to cup your hands and clap as if you are killing a swarm of African mosquitos.

Never let a little bit of deafness or the inability to breathe take you out of the fight. After all, you are a doctor—go down swinging. Even though your ears may be ringing and your nose is bleeding, it is important to keep calm and cool. Luckily, Dr. McCoy is a good lip reader, and he can tell Dr. K is talking smack. How dare he add insult to injury? Dr. McCoy fakes a kick to the groin and gives him a good cross to the windpipe.

Dr. Kardashian seems to have finally realized that he is out his fight club league. Clutching his throat, the coward turns in retreat, ridiculously gurgling out something about not being able to breathe. In the world of mixed martial arts, an opponent voluntarily offering up his back is like an early Christmas present. However, in the dog-eat-dog world of street fighting, an opponent turning his back to flee is asking for a swift-boot toe punt to the balloon knot. Point the toes of your striking foot to the sky and kick upward as hard as you can. This painful kick will definitely bruise up the leather cheerio.

As you have just witnessed, medical school does pays off. It doesn’t matter if the doctor is a cardiologist or just a guy named Dr. Feltersnatch who does mammograms out of his van in Wicker Park, they are all practiced in the dark arts, and you can learn a lot about dishing out some serious pain from them. Now, if you don’t mind, please turn your head and cough …