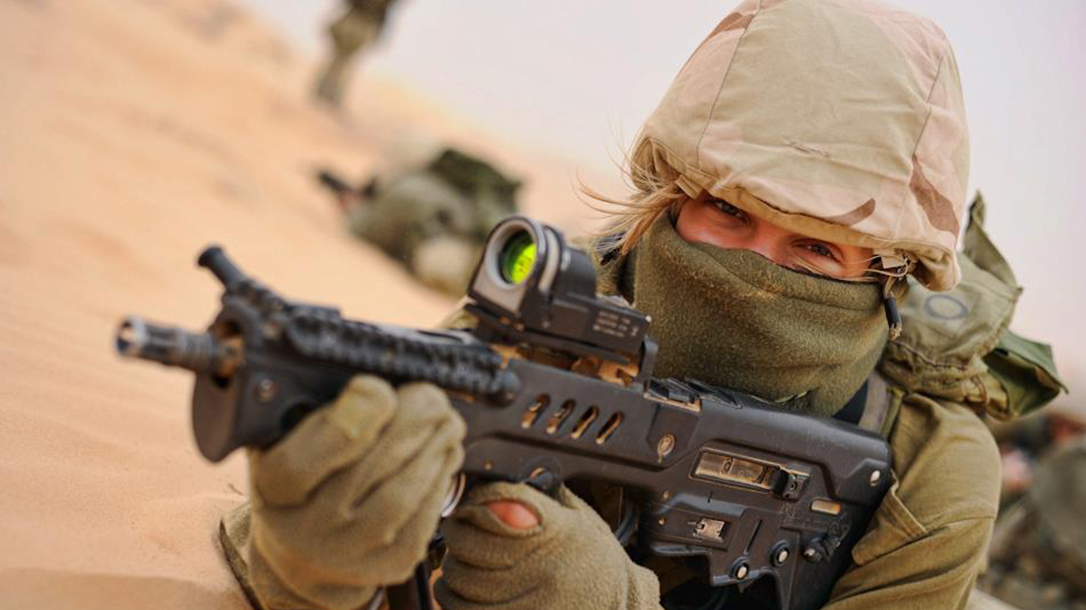 Admit it, if you are a red-blooded American man, there is something intriguing and even sexy about a woman who is every bit the ass-kicker her male counterparts are—be it on the range, in the octagon and even in special operations. This magazine has featured many capable women who fit such a category; just look at the last issue for proof. The female action heroine is also a big draw at the movies too: La Femme Nikita, Haywire and Atomic Blonde are just a few movies of this genre in which the female leads kick ass and take names. And if we peel back the pages of history a little bit, we can find that there are a number of cases where special units were comprised of only women, for the purpose of conducting special missions, intelligence operations and protective security. Read on for a few examples of these from the modern era.

From the 1980s through the end of Muamar Gaddafi’s reign as Libyan leader, he was protected by a cadre of female protectors. Under Brigade 77, these women were trained in weapons and defensive tactics. Within that brigade, there were those that protected Gaddafi domestically as well as the elite—those that travelled with him abroad. The elite protectors were selected for their beauty, long hair, virginity and their tactical skills. One can argue that Gaddafi was a bit sexist and exploited these women for his ego. However some of Gaddafi’s former bodyguards contend that he didn’t trust men to protect him or his secrets.

Under the command of the Iranian Police, a unit of highly trained female protectors was commissioned in 2017. These women do wear burkas in the execution of their duties, but they are assigned to protect visiting female dignitaries. These women are selectively chosen and undergo executive-protection training.

Yeah, sounds like a misogynistic name for a female intelligence unit, which is why a novel and movie loosely based on the Swallows was called Red Sparrow. Different bird, but same function, apparently. Sexpionage is indeed a thing and also great way to collect information and to entrap adversaries, but don’t think for a second that all these women have to do is flirt. These women were and are trained in spy tradecraft, have amazing critical thinking skills, possess great social-engineering techniques, and they can also kick butt, if needed.

Initially for deployment in Afghanistan, these professional soldiers, serving under the U.S. Special Operations Command (SOCOM), are attached to various special units to engage with females in the villages or areas where operations are being conducted. From providing medical aid to conducting searches and collecting intelligence, these female warriors are highly capable and well equipped. The physical demands of the job are quite intense because, as the special-operations teams move up and down the mountains and valleys of Afghanistan, so do the women attached to these units. The U.S. Marines version of the CSTs are called Female Engagement Teams (FETs).

Women have had a role in military, police, intelligence and protective units since Israel’s establishment. While certain combat and naval units are still closed to women, apart from instructor positions. There are however a number of female and mixed-gender combat units that are deployed at Israel’s various borders under the IDF’s command. Separate from the IDF is the Border Guard Police, and the women in the Border Guard units are trained like police and have arrest powers but are also deployed as quick-reaction units in urban environments. Fact is, a number of recent terrorist attacks were stopped by quick-reacting female border police officers. In Israel, there has been a 250% increase in female representation in combat, police and field units. In 2021, two new female-only brigades of the Border Police will be deployed as a terror-prevention resource.