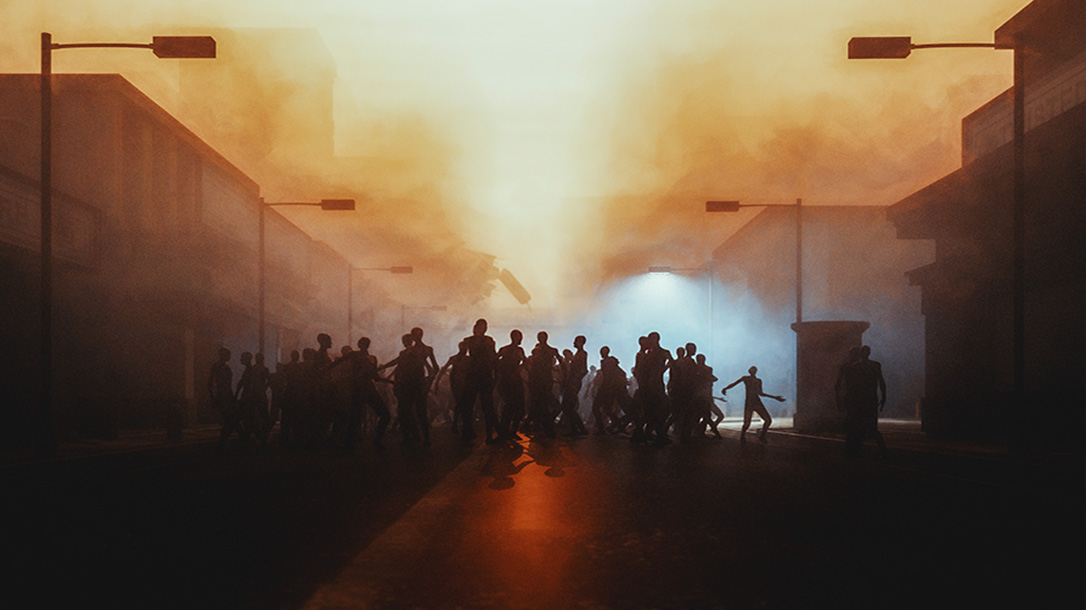 The Walking Dead, a post-apocalyptic horror television series on AMC, premiered on October 31, 2010. Whether you were a superfan that never missed an episode or just a casual watcher that tuned in every couple of episodes to get your zombie fix or to see if they killed off Lori yet because we all hated her. This show was a great “what would I do?’ kind of show. We all have an idea of how we would try to go about the ultimate survival situations, but we definitely had some “A-ha” moments and “I would NEVER do that!” moments. Here are eight things we can learn from The Walking Dead, from walking dead facts to basic zombie survival.

Anytime you and your group find yourselves in a town, mall, or shopping center of any kind, grab extra clothes because you can and will always manage to be covered in someone’s blood as well as your own, but usually someone else’s. It’s bad enough the world is now full of walking rotting corpses. Do what you can to ensure you don’t have to sleep in a shirt that doesn’t smell like you just crapped yourself.

2. You Are Going To Need Ear Pro

Hearing is important, so important it’s considered a disability if you have poor or no hearing. So why do we see all of the survivors shooting off higher caliber rifles and handguns like a 16-year-old in 1917? Yet they somehow show no signs of tinnitus or hearing loss. We’re even shown this to an almost unrealistic extent when Rick dispatches five zombies while inside and under a tank. If you passed 6th-grade science, you know that sound bounces in an environment like the m1 Abrams shown in this particular episode. Especially since Rick’s weapon of choice is a .44 magnum, and not even counting how loud it is, this gun has a decent amount of kick.

The .357 Colt Python magnum is Rick’s weapon of choice. For those who don’t know, .357 carries about 585 pounds of force, while the standard issue 9mm only has about 336 pounds. Needless to say, it’s a powerful round, like breaking your wrist, kind of round. And for those who are still confused, if you fire the colt python used in the show with your wrist bent as Rick does, let’s just say you’ll need to get to a hospital fast. So maybe you could find another way to harm yourself by being negligent.

4. Zombie Infection Isn’t The Only Infection

Did you get cut? Try cleaning that with no running water while it’s hot and humid, with low supplies, and always on the run. It’s bound to get infected and look nasty, so how do you avoid this? Wearing thick clothes should be a given as that can also protect from zombie scratches. But The Walking Dead takes place in Georgia, where summers are hot and humid. What do we do then? No worries, Sony; the same people who made the original Spiderman are developing shirts with built-in AC. But if this option is too expensive, handheld fans are always an eco-friendly option.

We’ve all seen Rambo, The Terminator, and other shows like Scarface, where they always run around with bottomless rifles. To say it bluntly and break your heart. No, full auto is not suitable for Walking Dead-style zombies. Sure, you’ll feel badass dumping round after round into the hoard coming your way, but they only die when shot in the head. Great job; you’re now out of ammo, out of luck, and just increased the hoard size, whereas if you just took your time to pick off all of the zombies (which, not to mention, is still a waste), you’d have way fewer zombies but way more ammo.

Food is required for life, so one would think that finding food would be more difficult, right? Well, The Walking dead doesn’t make it a rare resource past season 2. Even when everyone is forced to split up after the prison is ravaged, they magically have more than enough food. Now you may worry that if the eventual apocalypse is to come, you won’t have the power of TV magic to protect you. You’re right, but here are a few tips to help find and cook food. 1. Canned and preserved foods are best, 2. If it bleeds, you can cook it, 3. Don’t be picky; it’s all you have, 4. Human meat tastes just like pork, and finally, 5. According to the waffle house index, they should be open the standard 24 hours.

7. We All Need Swords

Once Michonne came on the scene in The Walking Dead comic issue #19 2005, TV series Episode 13 Season 2 “Beside The Dying Fire” 2012, she stole the show and changed how we all looked at a katana sword and made 99% of us have that “Ah Ha!” moment of what might be a better weapon versus a loud boom stick that is a beacon for everything dead. The katana was swift, quiet, effective, strong, and most importantly, still long enough to kill an ugly, decaying, re-animated body without having to get face-to-face like you would with a knife or a screwdriver.

Some might say, “But now you have to worry about keeping that thing sharp,” and without backstage prop people to handle that for you, you’ll have to get yourself a good sharpening stone and carry that MoFo in your bag. Trust me, without TV, video games, and other distractions we all waste our current lives on, you will have plenty of time to sit and sharpen your sword.

8. Take A Note From The Netherlands

The Netherlands is a far-off, mysterious land that most people can’t even point out on a map. So why are we talking about them? Well, Everyone in the walking dead moves around either by walking, running, taking a car, or even on the odd occasion, riding a horse. Nobody knows how to ride a bike which would be the best option due to the many options. Like how bikes are silent, fast, and easy to repair. Their beefier counterparts, like the adult trikes, have massive baskets to carry supplies while sacrificing nothing. Even if you needed a distraction and were the only member with a bike, with the power of one Babe Ruth baseball card and a rubber band, you’ll be herding an entire horde while in no danger.

So unless you’re out of shape, not a skilled marksman, or just an all-around emotionally scarred badass like Michonne, you may want to start your own “what I learned from post-apocalyptic” movies and video games. T.V. shows list because this is the best first-hand training video you will get these days.