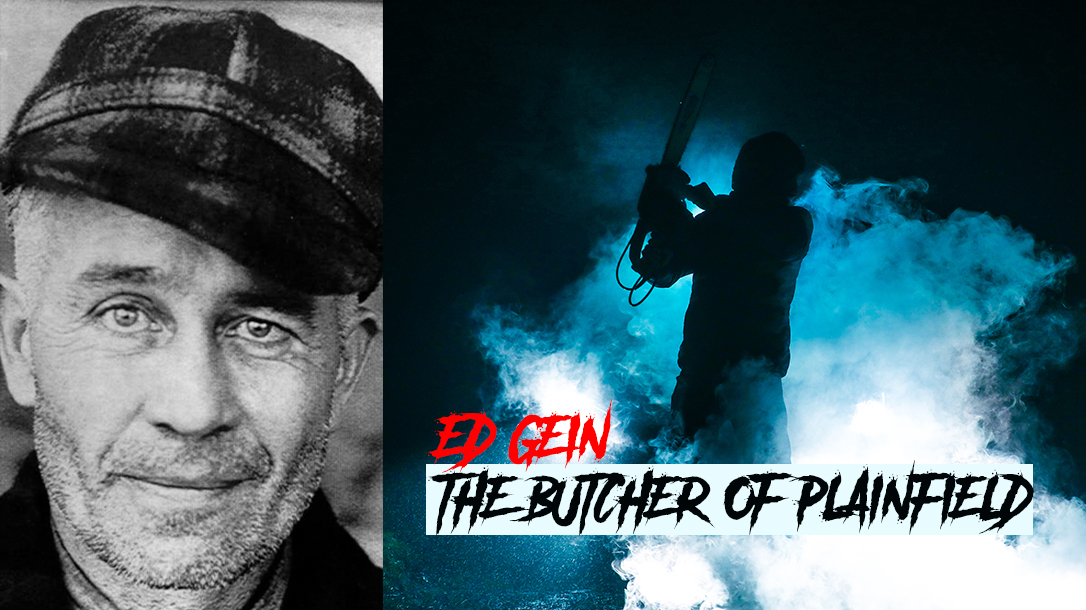 Ed Gein: How the ‘Butcher of Plainfield’ Inspired Most Serial Killer Movies

The Texas Chainsaw Massacre is one of the first—if not the first—“slasher” films. It’s serial killer movie unlike anything movie theater audiences had ever seen when it debuted in 1974. However, some Wisconsin police officers had actually already seen the real thing. When police raided the home of handyman Ed Gein in 1957, they were expecting to find local hardware store owner Bernice Worden either dead or alive. They were not, however, prepared to find the shop of horrors that lay inside Gein’s darkened house.

Ed Gein: The Ghoul of Plainfield

While Ed Gein wasn’t America’s first serial killer, he was probably the most inspirational … at least when it comes to serial killer movies. There was no comparing what they found in Gein’s house to anything ever seen before. Back then, there were none of the horror flicks we have in our collective culture—because Ed Gein would become the template for them.

In The Texas Chainsaw Massacre, the killer, “Leatherface,” wears a mask made of human skin. Inside his homestead is a collection of macabre furnishings made from human bones. That is also what Plainfield, Wis., police found in Ed Gein’s isolated farmhouse, along with so much more. In fact, The Texas Chainsaw Massacre wasn’t the only serial killer films to feature Gein’s handiwork either. This is not surprising, given the nature of Gein’s life story.

The Gein family lived on a large, out-of-the-way farm near Plainfield, Wisconsin. Ed and his brother, Henry, remained fairly isolated on the farm and only left to go to school. Their mother, Augusta, kept her two sons away from every outside influence she could, even though the town only had 680 people.

Augusta constantly subjected the boys to her religious and social beliefs, which included Old Testament-style punishments for the evil sins of man. Young Ed, who would one day be known as “The Plainfield Ghoul,” was shaped by stories of fire and brimstone, the evils of alcohol and lust-filled women who corrupted men for the Devil’s pleasure.

When Ed was 36, his father died and left him and Henry to support his mother on the farm by doing odd jobs around town. Henry soon planned to move away from the farm with a divorced woman. Worried about Ed, he tried to pull him away from his mother’s influence by criticizing his mother and her beliefs—something Ed didn’t respond well to.

One day in 1944, a fire broke out on the Gein homestead. When the smoke cleared, Ed reported his brother missing. Upon finding the body in an area burned by the fire, police determined that he had died from smoke inhalation. But Henry had been dead for much longer than the time Ed had reported him missing. But the police weren’t suspecting foul play and didn’t pursue an investigation at that time.

Augusta suffered a series of strokes the very next year that left her partially paralyzed and eventually killed her. Even as Ed cared for his mother, she verbally abused him. When Augusta died, Ed was alone on the farm. Like Norman Bates in the 1960 film Psycho, he became mentally wrecked after her death.

Gein began sealing off the rooms commonly used by his mother and restricting himself to certain parts of the house. His grief took a bizarre turn when he read about a local woman who passed away and was buried near his mother. He went out into the graveyard and dug her up just to have a look at a female body.

Gein then began visiting newly dug graves in the middle of the night and exhuming the bodies of middle-aged women who resembled his mother, a total of nine in all, including Augusta Gein. He also took body parts and fashioned them into everyday objects. His biggest effort was to make what he called “a woman suit” out of the skins of these women. He would tan their hides and stitch them together so he could become his mother—by literally crawling into her skin.

This is just like Buffalo Bill’s dress of human skin from the 1991 movie The Silence of the Lambs. And like Buffalo Bill, Gein wasn’t just snatching dead bodies. Eventually, he went in search of the freshest corpses he could get by turning to murder to acquire them.

However, Gein only killed two people in the 12 years following his mother’s death. The first was Mary Hogan, the owner of a bar who had disappeared in 1954. The second was Plainfield’s own Bernice Worden, whose disappearance brought police to the Gein farm in the first place.

In the end, the Ghoul of Plainfield was only caught because he told Worden’s son, a sheriff’s deputy, that he would visit the store to buy antifreeze. The last receipt found before Worden’s disappearance was for antifreeze. Police arrived at the store to find the cash register empty, the store a mess and blood on the floor. A search of Gein’s house forever changed the police officers. One of the cops, so devastated by what he witnessed, suffered a heart attack.

The End Is Near

This is where it gets particularly brutal. Inside, police recovered four noses, several bone fragments, nine death masks, a heart in a pan on the stove, a bowl made from a skull, 10 female heads with the tops sawn off, human skin covering several chair seats, pieces of salted genitalia in a box, skulls on his bedposts, organs in the refrigerator, a pair of lips on a string, a wastebasket made of human skin, a corset, leggings and masks made from skin, a belt made from nipples, Mary Hogan’s skull, and Bernice Worden’s head in a sack. But there was more.

Police also found Bernice Worden’s body gutted like a deer in his shed. The madman confessed to everything, but he didn’t seem to know that what he did was wrong. Eventually, a jury found Gein not guilty by reason of insanity. He spent the rest of his life in a mental institution where he died in 1984. Today, Gein’s sickening horror lives on via the silver screen, like in 2000’s American Psycho.