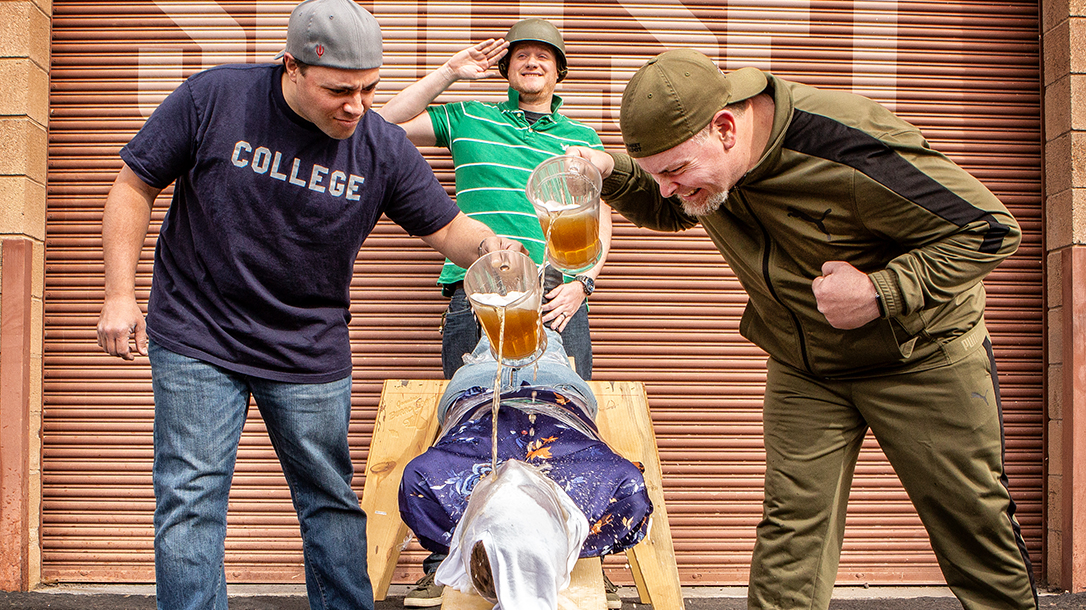 Look, before we get started talking about drinking games, I am going to put this straight out on Front Street. Real men don’t need drinking games to drink. At no time in my life did I feel the need to throw a ball in a cup to green light me to down a beer. I’m old school. I normally grab a 30-pack of Old Milwaukee and just disappear into the basement. You know, the same way our fathers have done since the repeal of Prohibition.

But if you are forced to break the man code and introduce Hasbro or Parker Brothers to your next booze fest, at least we can steer you in the right direction and save you a little face. The last thing you need is for someone to post a pic on Instagram of you playing flip cup or beer pong—Jesus, that’s embarrassing. All right, let’s get stupid …

As far as drinking games go, the concept here is nothing new. It’s been around since Johnny Depp made that stupid movie about having knives for fingers (not to be mistaken for that awesome movie with Freddy Krueger—his fingers were badass). This is really less of a game and more of an exercise in new-guy hazing. You don’t just become part of a squad without some initiation, and this is a pretty safe way to see if your prospect has a sense of humor.

The rules are as simple as paying your child support. The second the FNG shows up at your house party, stop him at the door. Have him drop everything he has and extend his arms. At that point, you and your boys duct tape two 40-ounce bottles of malt liquor to his hands. King Cobra has always been a good “go-to” beverage, but anything that has over 6 percent ABV and tastes like shit will work. He must finish both 40s before getting the use of his hands back. Have to take a piss? Not my problem … figure it out, newbie.

Lawyer’s disclaimer: Just make sure Mr. 40 Hands doesn’t wander outside in the neighborhood. Normally, a homeowners’ association will frown upon this type of behavior.

Nothing makes me want to suck-start a 9mm more than when someone shows up with a plate full of random jello shots. Two things immediately come to mind: One, I’m not fucking 9 years old; and two, guessing which shot is tequila and which one is Bacardi 151 doesn’t really please my overworked liver. However, I am not one to waste alcohol, so if you are going to act like a pimply-faced sorority girl, you might as well get competitive about it.

This game is definitely a team event that will require the utmost in “mouth-eye coordination.” First, grab a few shop creepers from Harbor Freight. They are cheap as shit but will get the job done. Next, you need to pair up with a teammate. Choosing who is driving and who is chomping is crucial. Putting the guy who just puked all over your kitchen sink 10 minutes ago as the captain of your ship may not be the best idea.

I suggest at least three teams to kick things off. The “hippos” will each have 10 color-coded jello shots randomly spread out on the floor in front of them. Make sure you have some space to maneuver around these shots. The goal of the game is twofold: Defend your team’s shots from other players and eat as many of the other teams’ shots as possible in one minute. No use of hands is allowed from the hippos—who will be riding belly down on the shop creepers—so you can see the importance of having halfway-sober drivers to push them around. At the end of the round, the hippo who has the most shots (in his or her color) left over wins. Your prize? Most likely, it will be a horrible case of upset stomach and diarrhea the following morning. Congrats, champ.

Lawyer’s note: There is a high probability you will be head butted numerous times during this competition. Wear a damn helmet to protect your grape.

Ah, yeah … this is an all-time classic. You know the party is in full effect when people start bleeding. C’mon, admit it—we’ve all played five-finger fillet at one point or another in our lives. It is probably the most pointless game in history, but with a few modifications, we can make it even more idiotic. All you need is a knife, a magic marker and an IQ of less than 50. Oh, I might have forgotten to mention that you will probably need a box of Band-Aids and possibly someone sober to drive you to the ER.

This competition is perfect for those office-party grudge matches. First, both players will write five of the harshest drinking punishments they can think of on their fingers and thumb. If you are going to get stabbed, you want the person doing it to receive maximum punishment. Next, you and your opponent need to agree on the actual stabbing utensil. I suggest you start out with a dull kitchen knife, unless you are die-hard member of the Satan’s Love Sluts motorcycle club, then a rusty boot knife would be appropriate.

Each contestant gets to go “around the world” (thumb-to-thumb) one time per round on his opponent’s hand. Slip up and cut a finger? Then you are obligated to chug whatever is written on the violated appendage. We aren’t really sure how you win this game. Every person we have ever seen play it usually ends up in the hospital within the first 10 minutes. Hey, that’s still a better story than “So, I was playing beer pong and …”

Lawyer’s disclaimer: Do not play this game. If you do, you are a borderline psychotic, and we take no responsibility for your dumb-ass actions. When you are at the hospital, tell them you learned about this game from Esquire.

Oh, man—we saved the worst of the drinking games for last! At no point while demonstrating this game did I think it would be a good idea. Therefore, consider this a lesson in good initiative, bad judgment. When I went to SERE (Survival, Evasion, Resistance and Escape) school back in the 90s, I learned all about the joys of waterboarding. During my aquatic exercise, I remember thinking to myself that this would be a great drinking game. OK, I’m totally full of shit. I was actually thinking this was the end of my life, and I’m pretty sure I pissed my pants, but I digress. Despite all that, we can still make torture fun again.

Now, I could give you step-by-step instructions on the proper procedure for beer boarding, but it gets pretty technical, and that might also somehow link me to an alcohol-induced homicide. So, if you really want to do some research, hell, just watch G.I. Jane. Demi Moore was doing it before most of you pansies were out of grade school.

For this game, my suggestion is to just fake it. That’s right, use it to get rid of any unwanted party guests. Nothing says, “F-this, I’m outta here” better than walking by a room and witnessing a beer boarding in action—only to have all the participants stop, look at you and then slowly close the door in your face. I am pretty sure that will the last time you see the Wilsons and their assortment of jello shots at your shindig.

Lawyer’s Disclaimer: I can guarantee that this is against the Geneva Conventions. WTF? Stop!

For even more manliness, be sure to check out our podcast Skillset Live!  Get in on the conversation on our social media pages or pick up a back issue at OutdoorGroupStore.com!