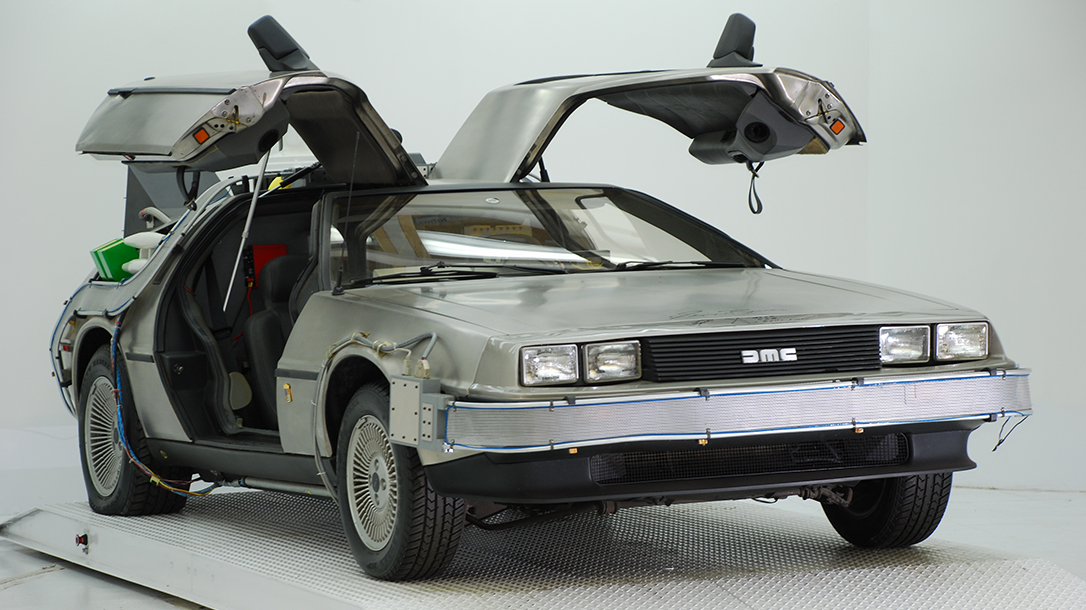 DMC DeLorean: Doc Brown’s Legendary Car From ‘Back To the Future’

[Newscaster]:  “In other news, officials at the Pacific Nuclear Research Facility have denied the rumor that a case of plutonium was in fact stolen from their vault two weeks ago.”  Enter Marty McFly, brought to life by Michael J. Fox, and the show-stealing Doc E. Brown, brilliantly created by Christopher Lloyd, who, as it turns out, does indeed happen to have a case of stolen plutonium under his clock collection.

The DMC Delorean Is Born

Sometimes, a single line of dialog encompasses a whole story.  McFly to Doc:  “You built a time machine out of a Delorean?”  Rejoinder from Doc:  “When this baby hits 88 miles an hour, we’re going to see some serious s&*t.”

Thus was the movie Back To the Future launched, and more importantly for present purposes, the  Delorean time machine born.  The movie further pushed the popularity envelope with tremendous special effects (for 1985), a great supporting cast, and a soundtrack from Huey Lewis & The News which gets airplay to this day, including particularly the near-anthems of “Back In Time” and “The Power of Love.”

As often happens when those particular elements of Hollywood alchemy all get mixed in the same Dixie cup, you turn lead into gold and celluloid into a cult following.  The car has spawned an untold number of clones, and even a business building them, headed up by a slightly pathologic guy named Bruce Coulombe.  Actually, we should remove the modifier “slightly” from the preceding sentence:  he’s full on.  As the casual observer learns, the off-the-charts level of detail of his replicas, the observers’ reactions go from “impressive” to “holy flux capacitor” to “this is a put-on, right?” to simply clinical catatonia.  It’s not detail:  it’s mania.  If you are up for some quality boggling, check out deloreantimemachines.com.

Well, thank heavens for Bruce, because Brian Grams would himself have otherwise gone out of his mind.  See, Brian is huge into the movie car community.  He has them in his museum, at his house, at his friends’ houses, his great-aunt’s condo in Boca, something unclear about Adelaide and a couple under the couch cushions.  And Brian was heavily supported in this by none other than custom movie car crafter George Barris.  Psychologists call this an “enabler,” but that analysis will have to wait.  Anyway, as might be expected, Brian, thus enabled, was barely continent seeking a Back To The Future Delorean.

Problem rather bein’, only one of the actual screen cars has ever been released to the public, and you’d an easier heist hitting the Pacific Nuclear Research Facility to get that plutonium than getting that one.  Of no matter:  Brian had Bruce.  Bruce gained a significant chunk of his Delorean Grandmastery by restoring one of the original cars for Universal Studios.  His resultant level of documentation ranks up there with things like the Human Genome Project and the development of the Cray computer system.  Brian asked him to do a car.  And oh, boy, did he.

Brian’s is an ’81 Delorean.  It’s got the standard Volvo V-6 and a five-speed manual.  Brian grins:  “It would actually be anybody’s bet whether it could actually hit the movie’s 88 miles an hour.”  But of course, this car’s mission wasn’t being a real-world hotrod, but rather a comically magnificent construct.  Not only does it have the breathtaking details, it benefits from a signature from Christopher Lloyd himself.

Almost Out A Time

As to the details, well, where do we start?  Genuine Delorean.  “OUTATIME” plates.  That much is easy.  Then things started getting a little out of hand.  Bruce employs, among a great many other sources of talent, NASA engineers.  They are every bit as pathologic as is Bruce, but the medical literature reflects that people like this seek each other out, so we can expect that.  As to NASA, hey, if they can launch Voyageur and do Martian landings, making a radical movie car should hardly tax their prodigious talents.  They made up for that lack of extraterrestial challenge by going over the top.

Start with opening the gull-wing door.   High-fidelity speakers perfectly replicate the fictional sound of the door opening.   Once inside, they made a perfect replica of . . . well . . . everything.  But let’s start with the core of the time machine, the flux capacitor.  Somehow, someway, they made it.  There is no website you can go to and order “five flux capacitor kits.”  They fabbed the whole thing out of nothing.  And it is perfectly identical to the original.  And it extends to every surface.  It looks like the inside of the Space Shuttle, buttons and lights and switches of every kind and description on the console, on the dash, overhead, everywhere.

Bruce rattles off terms like “ESR,” “Relay Cluster,” “Spectrum analyzer,” “Y-handle,” “time circuits,”  “plutonium meters,” “flux bands,” “aux power,” “TFC,” “SID,” “plutonium meter,” “heat sink” “Mr. Fusion,” “wormhole emitter,” “neon under rocker panels,” “pontoons” and a great many other things that we haven’t got the slightest idea what he’s talking about.  But all that stuff is most emphatically there, and there’re a few hundred ways to  change its lighting pattern, frequency, color, give you Doc Brown’s voice, or order some really good Latvian take-out.  It’s truly a tour de force, albeit a manic one.

So what does Brian do with it?  Mostly, he wows fans by displaying it.  Although in one particularly good story, he took it to a drive-in theater that was showing Back To The Future.  It’s a pretty good bet that most folks present didn’t bother looking much at the screen.  And as to what comes next?  An enthusiastic more of the same.

Which naturally segues to this:

A great further Doc Brown quote:  “We’re sending you back to the future!”