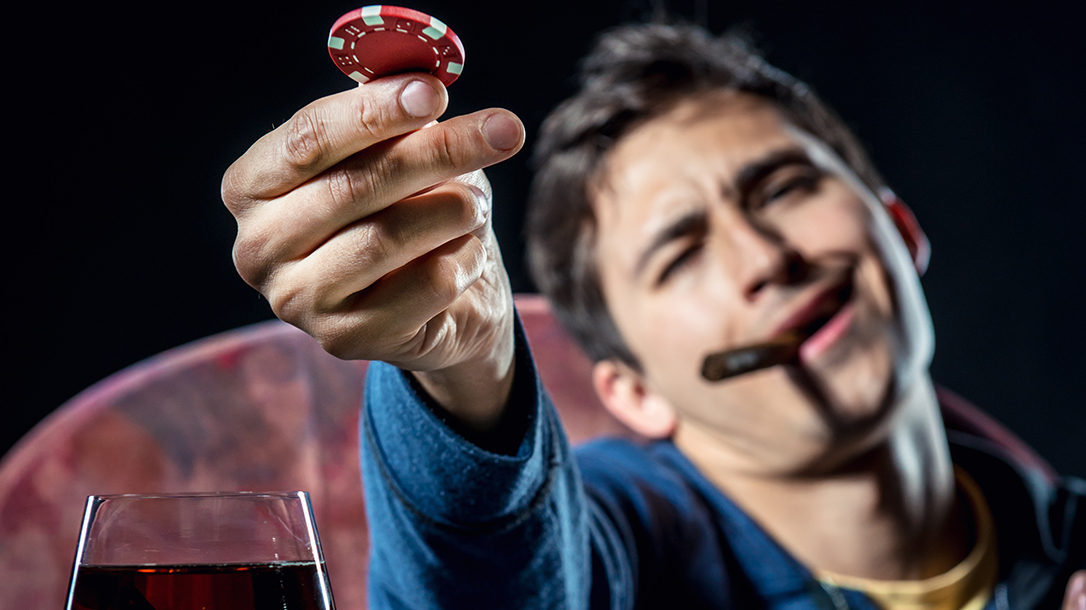 5 Ways To Completely Destroy Your Friends In Poker

No hunting trip, fishing weekend or guys’ night out would be complete without some cards and chips. Poker night is even sweeter when you walk away with a thick wallet and you can scoreboard some friends.

Mastering The Art Of Poker

While your skills may not mean a trip to the World Series of Poker or the World Poker Tour, a few adjustments may mean raking more cash game pots or finding a spot in a tournament’s winner’s circle. Here are five things to remember when facing off with friends for some Texas Hold ’em fun.

Televised poker shows huge bluffs—junk hands getting rewarded with big pots. But in general, that is not the norm. Being more selective means more winning hands than those that come in second or third. Those second-place hands can be costly in the long run.

Patience is key in poker, and good things come to those who wait. Splashing around in lots of pots may make you feel like a poker superstar, but it can drain that chip stack. Play smart and pick your moments, especially if you’re a less-experienced player. Poker is a game of skill, and as Texas poker legend Doyle Brunson notes, “Everyone gets lucky once in a while, but no one is consistently lucky.”

Many players dealt a big hand like pocket aces or kings, or even hitting a big hand on the flop, are often tempted to trap an opponent. This can work at times, but it can also be costly. Betting those hands pays off in the long run, especially with several callers. More players can mean more chances to lose—it’s best to thin the herd.

Also, just because a player with a strong hand checks the action doesn’t mean an opponent will bet that a turn or river card is dealt. A player holding 8♦-8♠ will find a huge hand on a board like 8♥9♠J♦. The temptation might be to check and disguise your strength in hopes of reeling in more chips on the turn and river. An opponent who checks behind might see a Q♦ on the turn.

Now, a player with K-10 has made a straight, and another diamond on the river adds flush possibilities. These scenarios will have your chip stack needing a lifeline. Letting other players see more cards without having to pay isn’t always a good idea. Be aggressive and reap the rewards.

3. Back Off The Bluffing

Movies and televised poker glorify massive bluffs that see players fold to an inferior hand. And indeed, bluffing is one of the aspects of poker that makes the game great. It’s quite a rush playing against a friend and showing your 9-5 nothing after he just folded two pair.

Despite that, bluffing too much can become a predictable pattern and can be extremely costly. Many players believe bluffing is a nice way to score a mountain of chips. But savvy players will figure out those patterns and begin calling or raising. It’s better to “semi-bluff” wisely on occasion when your table image or the board makes sense regarding what you mighthave.

On the flip side, don’t always believe an opponent is bluffing. Calling with third pair can siphon chips away as an opponent flips over top pair or better to take another pot.

The first three rules aren’t always set in stone. If you have a conservative table image, throwing in a bluff here and there may be wise. In a heads-up pot, trapping can pay off in big ways. Mixing up your game up a bit makes for less predictability. Opponents may think you’re strong when you are actually weak, or they may think you’re weak when you are actually strong.

That mystery can lead to winning more pots. Also, don’t just wait for aces, kings or queens. Make some calls or raises with mid-range pairs or suited connectors. Hit three of a kind, a straight or a flush, and that hand may be unexpected—leading to some chip extraction.

Kenny Rogers may have passed away in 2020, but his words still ring true: “You’ve got to know when to hold ’em, know when to fold ’em, know when to walk away, and know when to run.” Too many new players become “calling stations,” thinking second or third pairs might pay off. They call bets with top pair and a weak kicker or with a board that makes it unlikely their hand will win. It’s always okay to chuck in a losing hand and even to get bluffed once in a while.

Save those chips for better spots and take mental notes on opponents, situations and betting patterns. You may fold now, but that same opponent may be in big trouble the next time. Don’t be afraid to fold or raise, but if you’re just in the game simply calling bets, it could be a long night.

(Note that these tips apply to no-limit Texas Hold ’em, but they can also be applied to other games, including seven-card stud and Omaha.)