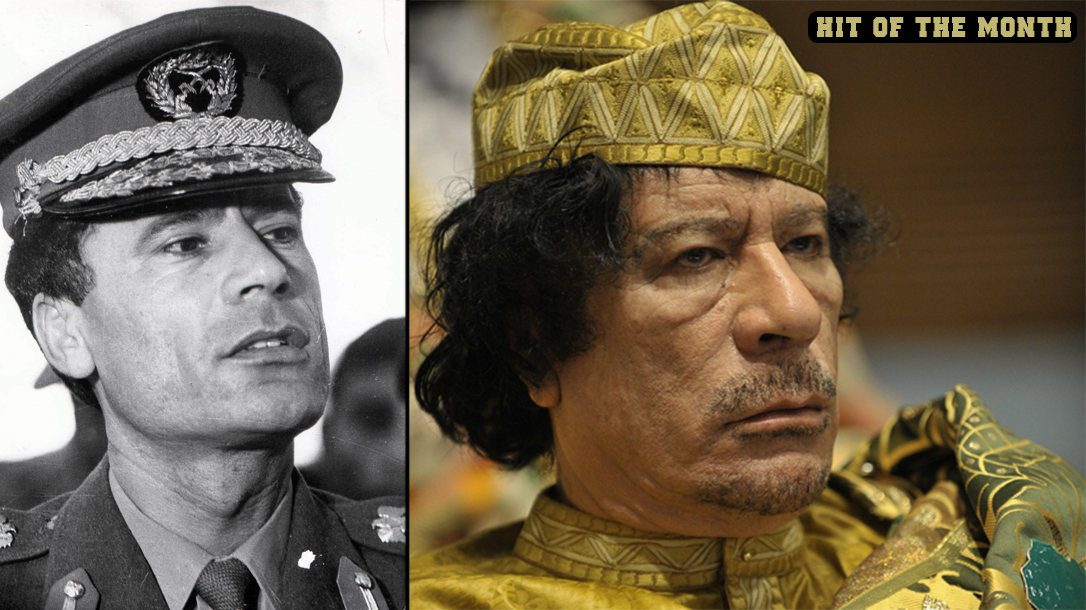 Hit Of The Month: The Brutal Death Of Libyan Dictator Muammar Gaddafi

Muammar Gaddafi, the leader of Libya and Africa’s “King of Kings,” was no stranger to attempts on his life. In one of many attempts, the U.S. bombed his house in 1986 in retribution for the bombing of Pan Am Flight 103. The following year, there were so many assassination attempts on Gaddafi that he commissioned a secret police force with the sole purpose of raiding mosques.

He worried that the threat to his power would come from inside, by radicals. Mosques were of particular concern since his lifestyle was, by all accounts, less than Islamic. Gaddafi ruled with an iron fist and was well equipped to put down any rebellion from within. Until 2011, that is, when an air campaign and the winds of change from the Arab Spring came blowing through, and he would meet his well-deserved fate in his birthplace of Sirte, Libya.

Gaddafi saw himself as a statesman, a revolutionary and a fashionable trend setter. The rest of the world saw him as a maniac and an uber-creep. But that didn’t stop Beyoncé, Mariah Carey and Usher from flying to Libya to perform private events for the brutal dictator in the years leading up to his assassination. Even though he was responsible for the bombing of a civilian airliner that killed 243 people and the rape of hundreds in specially built sex dungeons, these woke popstars weren’t about to be stopped from dancing for the devil.

To add to his celebrity mystique, he formed his own high-fashion personal protection unit. Like a scene out of an Austin Powers film, Gaddafi handpicked the team he named the Revolutionary Nuns, known to the west as the Amazonian Guard.

The criteria for membership was simple: Be tall, be beautiful, but above all else, be a virgin. The Guard was trained in firearms, martial arts and close protection. They swore an oath of loyalty and celibacy. The celibacy part had some flexibility because Gaddafi and his sons—true to form—raped them too. Given his violent life history, it should be little surprise that Gaddafi’s death would be equally brutal.

This Time Around, The Revolution Will Be Posted On Facebook

The “Arab Spring” was an anti-government movement that swept through the Middle East and North Africa, with the goal of removing oppressive dictators. One thing the oppressed had on their side this time was independent social media platforms and the ability to organize thousands of people into mobs to protest. Many regimes throughout the region fell under the pressure of these demonstrations and the resistance that arose from them, with dictators often finding refuge in foreign countries. Not Gaddafi.

A week before his demise, he declared in a speech, “My forces will turn this country into a hell rather than surrender like women.” Unfortunately for Gaddafi, his enemies united under the new National Transition Council (NTC), which had the backing of the West. They established a no-fly zone and a no-drive zone, and any military equipment that dared to move was destroyed from above.

On August 20, 2011, the noose was tightening around Gaddafi in the capitol city of Tripoli. Tripoli fell, but not before Gaddafi narrowly escaped in his convoy, heading to the city of Sirte. With its sprawling villas and rows of eucalyptus trees, Sirte was a fortified stronghold. The NTC were out in force and monitoring radio communications from Gaddafi loyalists, and the city was surrounded. At night, regime forces launched attacks on the blockade while others probed for weak spots in the lines to flee the besieged city.

The fighting raged on, and “call sign 2”—believed to be Gaddafi—had gone radio silent. On October 20, the eye in the sky passed the word down. A large convoy was just struck by French fighter aircraft on the outskirts of Sirte. Radio traffic indicated that the “asset” was among them.

A badly injured Gaddafi was pulled from a street drainpipe. He looked confused as he was pinned to the hood of a vehicle. Someone in the crowd yelled, “Keep him alive!” Gaddafi was swept up into the frenzied crowd, who were firing wildly in the air. The mob kicked and punched him.

Struggling to stay on his feet, he was stabbed in the ass with a bayonet. Moments later, a single gunshot rang out, and Gaddafi hit the dirt. Voices in the crowd chanted, “Allahu Akbar!” The tyrant laid twisted—deader than disco—at the feet of the people who he had oppressed for decades. He was killed by his own tricked-out, gold-plated cartel gun. Gaddafi’s last words before his death were, “What did I do to you?”