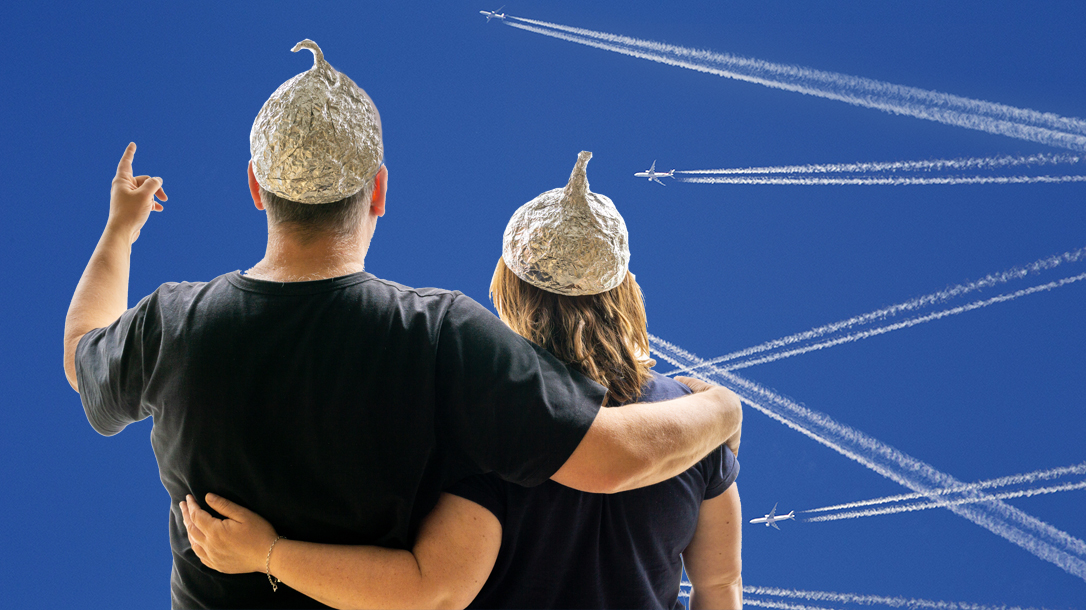 Look up in the sky! It’s a bird, it’s a plane, no it’s … wait, what is that? We’ve all seen them, and most of us have wondered about them: those long, white, cloud-like streaks in the sky. Some believe they are condensation trails, better known as contrails. These are trails of vapor or steam H2O left behind jets and commercial airliners due to changes in air pressure and temperatures.

However, others believe that these white lines hanging in the atmosphere for hours and dispersing widely across the sky are something slightly more nefarious: chemtrails. Chemical trails are the conspiracy-theory flipside of what these clouds could be. They are a widely known conspiracy theory, and some people that think the government is releasing chemical or biological agents into our skies for many reasons, ranging from weather control to more obscure theories, such as mind control and infertility.

There are countless TV shows and movies that show these chemtrails in the sky, sometimes crisscrossing over one another. Many articles exist discussing the theories surrounding this smoke or cloud-like dust in the sky left behind by airplanes. Sadly however, most of them are condescending and accusatory, as opposed informational and interesting. Writers and journalists give readers their interpretations of facts with a slight touch of personal opinion.

One example is an article from The Guardian, “My month with chemtrail conspiracy theorists,” written by Carey Dunne. This family opened their home and allowed the author to stay with them. They taught this person how to farm along with many other skillsets.  This writer spent the month with the family, and it seemed, at least to me, they came off less than flattering. The author was unsure how “socially progressive, educated” individuals could reject science. Like, hey, “You’re nice and you’re smart, but you’re nuts! How did you end up this way?” That is how this article came off. It was as if the writer felt sorry for them. Theories, however, are just that—they try to explain the unexplainable or simply something that just doesn’t feel right. Remember when your grandma told you to always trust your gut?

One has to wonder why so many articles exist stating that science is disproving the chemtrails theory. I have to ask, if the aerial disbursement of chemicals is a “tinfoil-hat” theory, and only crazy conspiracy theorists like Alex Jones believe in them, then why worry about it so much? Why get so upset that the crazy people believe something different? They’re crazy, right? Do you believe in aliens? If so, does it matter if your neighbor doesn’t? Well, I guess it does when it is revealed that experiments, such as geoengineering, are being tested and have been for years. What is geoengineering, you ask?

Let’s take a trip into the beyond where weather control, or cloud seeding, is real, where science is manipulating the weather through aerial disbursement, and someone from Harvard University is writing papers about solar geoengineering—sunlight-reflecting particles released in the name of combatting global warming … oh, wait … that’s now! Geoengineering is also referred to as negative emissions technologies. I’ll bet putting it that way makes you feel all warm and fuzzy inside, like someone much smarter than you is willing to help you and the rest of the dumb ones to better your life on this planet.

Geoengineering apparently has two parts. To pull the carbon dioxide out of the atmosphere, so less heat will be enclosed on the earth. The other part is light-reflecting particles released by aircrafts into the atmosphere to reflect sunlight or heat away from the earth. Here is a quote from an MIT Technology Review piece titled “What is geoengineering—and why should you care?” by James Temple: “Most famously, the massive eruption of Mt. Pinatubo in the summer of 1991 spewed some 20 million tons of sulfur dioxide into the sky. By reflecting sunlight back into space, the particles in the stratosphere helped push global temperatures down about 0.5 °C over the next two years.

Apparently, now these sun-blocking eruptions are a good thing! They have already begun testing this in open-air research, and The Stratospheric Controlled Perturbation Experiment (SCoPEx), run by Harvard University, launched 300 stratospheric balloons worldwide in 2019.

So, why is there a stigma surrounding someone thinking that something is being sprayed besides H2O condensation into the air by these massive aircraft? If we are geoengineering due to too much carbon dioxide in the sky, then why are planes even still a thing? Isn’t it contradictory to use something that is already emitting CO2 to disperse something else to help with the excess CO2 in the atmosphere? It is almost as confusing as it is upsetting when I read about the disdain for someone who simply sees the world differently than others. The moral of the story, of course, is not to judge one another for thinking differently, even if it sounds crazy, because one day it just might turn out to be true.