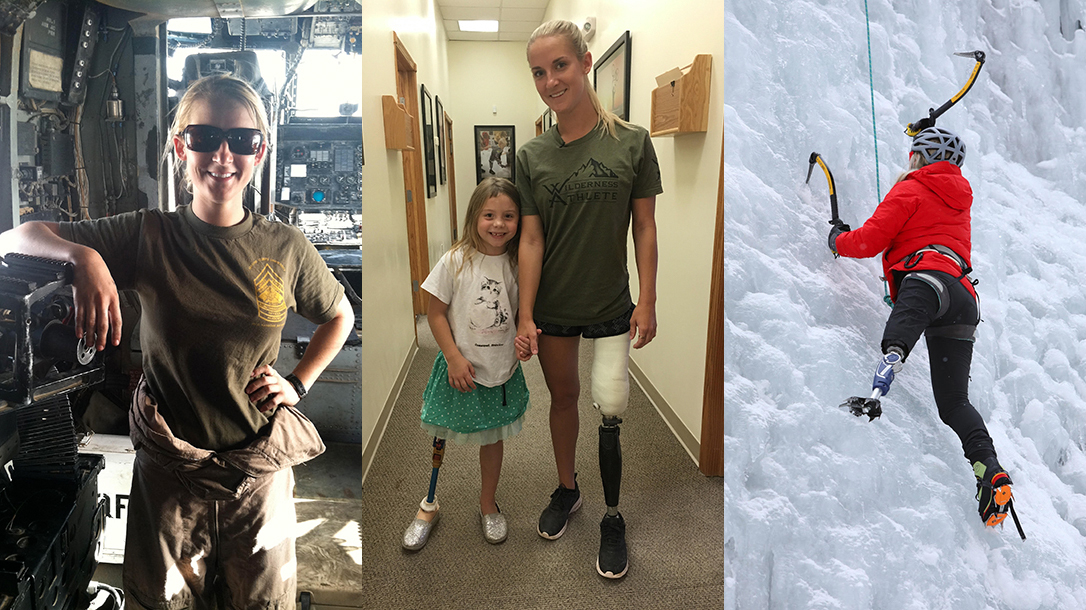 Kirstie Ennis loved the Marine Corps life as a helicopter door gunner and airframe mechanic with HMH-362 (Heavy Marine Helicopter squadron). She loved it all — the CH-53D she worked on, the deployments, all of it. But it was on her second deployment to Afghanistan that her life changed forever.

The Journey of Kirstie Ennis

During a combat resupply mission to a forward operating base in 2012, her helicopter went down. The crash left her with an above-the-knee amputation on her left leg, full-thickness facial trauma, traumatic brain injury, cervical and lumbar spine trauma, and bilateral shoulder damage. There were times where she could remember very little about her own family. After dozens of surgeries and therapies, she was medically retired from the Marine Corps.

Today, she owns many businesses and runs a nonprofit designed to help other nonprofits. She’s an accomplished adaptive sports competitor, a member of the USA Paralympic Snowboarding Team and an avid mountaineer. She’s also on a quest to climb the tallest peak on each of the seven continents.

After the Corps, she was worried she wouldn’t be able to serve others. It took some time, but not only did she figure it out, she made some smart investments and now works fulltime to help nonprofits. But it wasn’t an easy trip.

Kirstie Ennis (KE):  I graduated from high school early, got my peer degree from college at 17, and I turned out to be a little too smart for my own good — and a little too mischievous. It was better that I got out of my town when I did. It was like pulling teeth to get my dad to sign, but I eventually convinced him. My mom and my dad were both Marines, and my great aunt Lydia was one of the first female active duty Marines in World War II. So, there’s a little bit of a lineage there.

SS: How did you find yourself working with nonprofits?

For me, it’s about paying it forward. I watched those behind the scenes, what they did and how many people they helped. Also, I experienced the variety of ways that sports, recreational therapy and athletics can change people’s lives. I fell in love with it. It’s so simple, but all too often we overlook the work being done right there in front of us. I love being able to push what they’re doing, what their missions are, who they’re helping, and I try to support them in any way I can. The Kirstie Ennis Foundation is a nonprofit that writes grants to support other nonprofits, especially Building Homes for Heroes, PTSD Veteran Athletes, and GLAM4GOOD.

SS: What advice can you give separating troops about starting their own businesses?

KE:  The biggest thing is if it’s your dream, go after it! Figure out what you need to do, where you can market it and just go after it. We hold ourselves back by thinking that we can’t, for whatever reason — whether it’s mental, physical, emotional, financial, opportunistic or whatever. We too often let that hold us back, but we just have to figure out how we can. I honestly don’t spend much time on the Internet looking for help — I usually just go for it, and sometimes I get lucky. I established a team of people who are strong where I’m weak. Especially in the areas that I don’t feel too confident about, I pick the people that can fill in those gaps for me.

SS: How do separating troops — disabled or not — avoid feeling lost when they leave the military?

KE:  It’s easy for any veteran when they get out of the military to feel like they are alone, but they’re not. This is another reason I support the nonprofits I do. I want to show people who think they’re alone that the resources are out there and there are ways to get involved.

Leaving the military is one of those situations in which you must remind yourself to evaluate and control how you react. If you choose to be overwhelmed by it, then, of course, you are going to stumble and let yourself down. But it is possible to control your feelings in positive ways. You just need to figure out what’s going to work best for you. If you have to try something new and be awful at it for a little while, OK. But work to figure out where your strengths and weaknesses are and then find the people who can help you to achieve your goals.

SS: How does it feel to look back and see how far you’ve come?

KE:  That first year I had a hell of a time struggling with my purpose. I even tried taking my own life on the first anniversary of being hurt. There was a lot there for me to deal with. There was a lot to process and a lot to overcome, and every day was different. I am still dealing with pain and discomfort. There is always a battle, but that makes success that much sweeter when it comes.

I really hope to be able to inspire the world to use more of their potential and to show that the “disabled” can do whatever they seek to do and whatever their hearts desire.