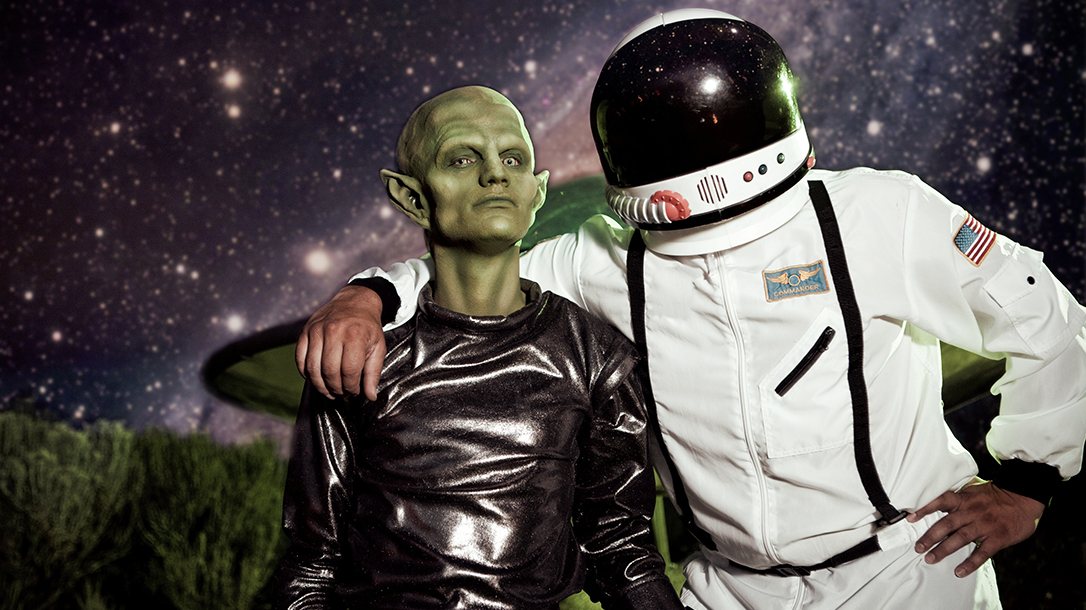 Ever wonder what the difference is between a close encounter of the first kind versus a fourth kind? Most of us have seen one movie or another about a close encounter of some kind, with either a lifeform or a spacecraft. Probably the most notable is Steven Spielberg’s Close Encounters Of The Third Kind 1977, starring Richard Dreyfuss.

The system of classification of close encounters was first suggested by astronomer and UFO researcher J. Allen Hynek’s book The UFO Experience: A Scientific Inquiry. It discusses the various types of events in which someone witnesses an unidentified flying object, or “UAP” (unidentified aerial phenomenon), as our government tells us they are now called. Therefore, let’s breakdown all seven—yes, I said seven—kinds of encounters one can possibly have with beings from another part of the universe.

Close Encounters Of The First Kind

A close encounter of the first kind is the most common among us amateur UFO/UAP enthusiasts since it refers to witnessing an unidentifiable aircraft within 150 meters, or approximately 500 feet. Granted, 500 feet is pretty close. The most talked about of such encounters today is likely the “Tic Tac UFO” that was recently reported by mainstream news, and sadly, this one is not new; the retired Navy pilot spotted the object back in 2004.

Close Encounters Of The Second Kind

This is when a UAP leaves evidence behind on the ground, such as burn marks, or it interferes with electronic devices and is also witnessed. One has to wonder when we watch ghost hunting shows or even try to contact the beyond on our own through EVPs (electronic voice phenomenon) if those really are people who met their ends tragically with unfinished business, or if instead perhaps they are aliens trying to reach out to us? (Sorry, Aunt Edna, but E.T. is phoning home at this time and your call will be answered in the order in which it was received. Wait! Can they use Ouija boards too?)

Close Encounters Of The Third Kind

The third kind happens when some sort of creature or alien is witnessed or when an interaction happens with the entity. We hope that if this is the type of encounter you have, the alien is friendly and comes in peace (but hopefully not like the aliens from Mars Attacks! sort of “come in peace”).

As it turns out, there are even six more subtypes for the third encounter according to UFO researcher Ted Bloecher.
1. Aboard: This is when you see the little guy through the window of his UFO as he flies by. (That’s gotta be hilarious.)
2. Both: This means that you see him through the window as he pulls up, and then you witness him getting out of his car … I mean craft.
3. Close: Here you see him near the spacecraft, but he is neither getting in or out. Ya know, like he is waiting to pick up the kids.
4. Direct: This one is a group effort. You have to see the alien and then hear that other people have reported the same flying object.

5. Excluded: The alien is seen, but no craft is reported. So basically, he has been exiled and is stuck here.
6. Frequence: No UAPs or aliens have been spotted, but you experience “intelligent communication.” (Not too sure what that means, but we imagine that it happens more frequently in states that have legalized cannabis gummies.)

Close Encounters Of The Fourth Kind

Close Encounters Of The Fifth Kind

Close Encounters Of The Sixth And Seventh Kinds

Last but not least, there are two more types of encounters, and these are the worst. The sixth encounter involves the death of a human or an animal, channeling entities (an intrusion) or parasitic attachment. (All these suck, or so we have heard.) The seventh is the creation of an alien-human hybrid, either by sexual reproduction (like Scully in The X-Files) or by scientific methods. (This actually might be fun; don’t knock it until you try it.)

Now that you know the various types of alien encounters, be sure to tell us here at Skillset HQ all about yours when it occurs. Oh, and most importantly, we require photos, so do not forget to send these as well.