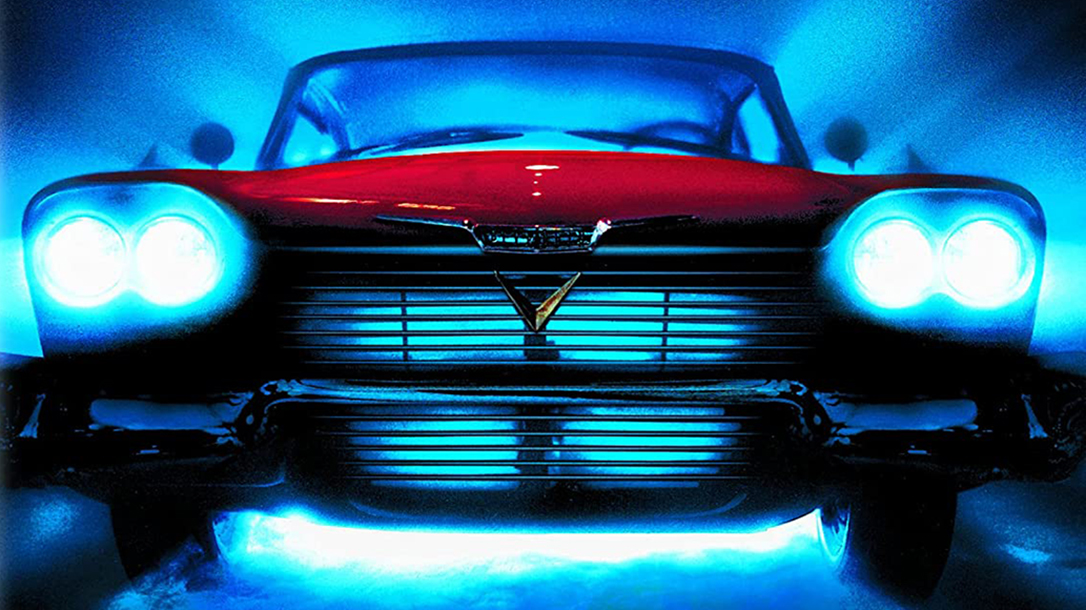 That grandmaster of the horror genre, Stephen King, wrote Christine back in 1983 about a Plymouth Fury that was possessed with an evil spirit.  It was directed by another kindred spirit of horror, John Carpenter.  The movie starts showing the car, a bright red ’58, coming down the assembly line.  King gets right down to business. As a line worker has his hand near the top of the radiator, the open hood slams down like giant jaws.  Right after that, another worker takes a quick smoke break in the front seat, dropping cigar ash as he does so.  Moments later, another worker opens the driver’s door and the cigar smoker falls out dead.  And that pretty much sets the tone for an unrelenting blast of automotive mayhem.

The protagonist is a nerdy kid named Arnie. He happens to see the old Plymouth in an old man’s yard with a for sale sign on it.  It’s in really rough shape, and the buddy he brought with him tries to dissuade him. Of course, Arnie buys it anyway.  It comes out that the prior owner, the old man’s brother died in the car, as did his family.  Anyway, we won’t recount the full list of horribles that King conjured up. Suffice to say it was all perfectly awful.  The car becomes possessive of Arnie, ultimately causing him to experience a profound personality shift, from nerd to aggressive nastiness.  Ultimately, the car kills him.

All together, the production company bought 24 cars, which, after parting some out, left a total of 17 functioning ones.  Some were to look good for close-ups, some were crash cars, some were cut in half and mounted on a truck chassis for interior driving scenes, some were reinforced for ramming.  One was famously lit afire, more on which below.   When they ended production, only 2 of the original 24 were intact.

Filmed as is was in ’83, there simply wasn’t the computer-driven visuals that are now stock in trade for Hollywood.  One of the more notable efforts is that the car had a ability to heal damage to itself.  After it is badly vandalized, it proceeds to do just exactly that.  The way they filmed it is they set up powerful hydraulic rams, hidden from the camera’s viewpoint, and proceeded to destroy one of the cars.  Then, they played the film in reverse.  Even today, it’s remarkably effective.

In another particularly visual stunt, they blow up a gas station.  Again, this wasn’t some faked deal. They actually went out into the middle of nowhere and built a full gas station set.  Christine comes barreling in, smashing a car in the shop. She pins her victim between the car and the back wall, and breaches the gas tank.  Then the whole place goes up in truly spectacular fashion.   The car comes roaring out, well and truly on fire.  The driving was handled by stunt coordinator Terry Leonard.

He was fully suited in in Nomex, and was breathing out of an air tank.  One small complicating factor was that King wanted the windows all tinted opaque. He wanted moviegoers wondering if Arnie is the one doing the killing, or is the car doing it by itself?  So, Leonard finds himself at the wheel of a heavily flaming car, without any ability to see where he is going, while driving 70 mph.

Hell Of A Way To Make A Living

In one bit of probably much-welcome comic relief, there was a pretty good prank during filming.  The love interest, Leigh, played by actress Alexandra Paul figured she put one over on director John Carpenter.  Unbeknownst to him, she is an identical twin.  She brought in her sister and had a her act for her.  Carpenter could sense that something wasn’t quite right, but it wasn’t until he was looking at the sister while Alexandra walked up behind him that he figured it out.

So, Brian Grams, Professor Emeritus of the Cinematic, once had an original Christine from the movie as a loaner in his display at Volo Auto Museum.  That led to a pretty good story. Volo is not so much a museum as a complex, with maybe 15 or 20 buildings. Some are interconnected by walkways and some of which are stand alone.  Although it’s brightness and cheer in daylight, Brian reports it can be a little disconcerting when everyone is gone and the lights are out.

Things Got A Little Scary

On the day the museum was first taking the original Christine car into their detail shop, as it happened, he’d been working late, and was the only one there.  He walked out through that shop, because he’d parked right next to it, only a little dim outside lighting in through the windows.  As he walked past Christine’s front bumper, the horn blasted him and kept blasting, one unremitting wall of sound.   Now, Brian is a big, tough dude, but he’s also a modest one:  “I got the hell out of there.”  Turned out simply that the ancient horn relay had failed, albeit with magnificent timing.

Anyway, the owner of that original ended up selling it, which left Brian in the market for another one.  The one you see in these shots is a replica, but it’s a very well done one.  It’s actually a ’57 model year, but it’s been done up to be indistinguishable from a ’58.  The only departure is pretty cool:  there’s a lighting system of red LEDs hidden around the headlights, so the car can give a red-eyed furious glare.  The motor is a stock 318, which, believe it or not, is sporting dual quad carburetors from the factory.    The transmission is the old classic push-button variety.

There has always been such a huge demand to have it on display in the museum.  But there is one guy for whom Brian was willing to hand over the keys, and that would be none other than Stephen King himself.  King was working on a movie called 11/22/63, about the Kennedy assassination, along with J.J. Abrams and James Franco.  King became aware that Brian had this ultra-high-quality replica, and he called up to see if he could lay hands on it.  As Brian notes, King is fond of something termed “Easter Eggs” in his movies, which are subtle references to his other work.

While Brian does do vehicle rentals for certain commercial customers, he was so pleased to have King interested that all he asked him for was his signature on the dash.  King graciously obliged.  And in a delightful piece of you-can’t-make-this-up, he used a paint-pen, rather than a marker.  The dash was hot enough that the paint promptly ran down, looking an awful lot like blood.  King didn’t miss a beat:  “Apparently, the car remembers me.” 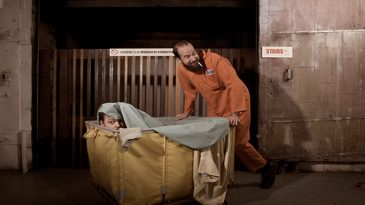 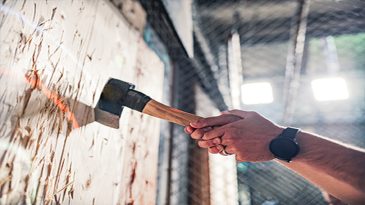 How To Throw an Ax: Bring Out Your Inner Viking

We’ve all seen them. Establishments that serve overpriced craft beer and have bullseyes painted on 2x4s that you throw “axes”