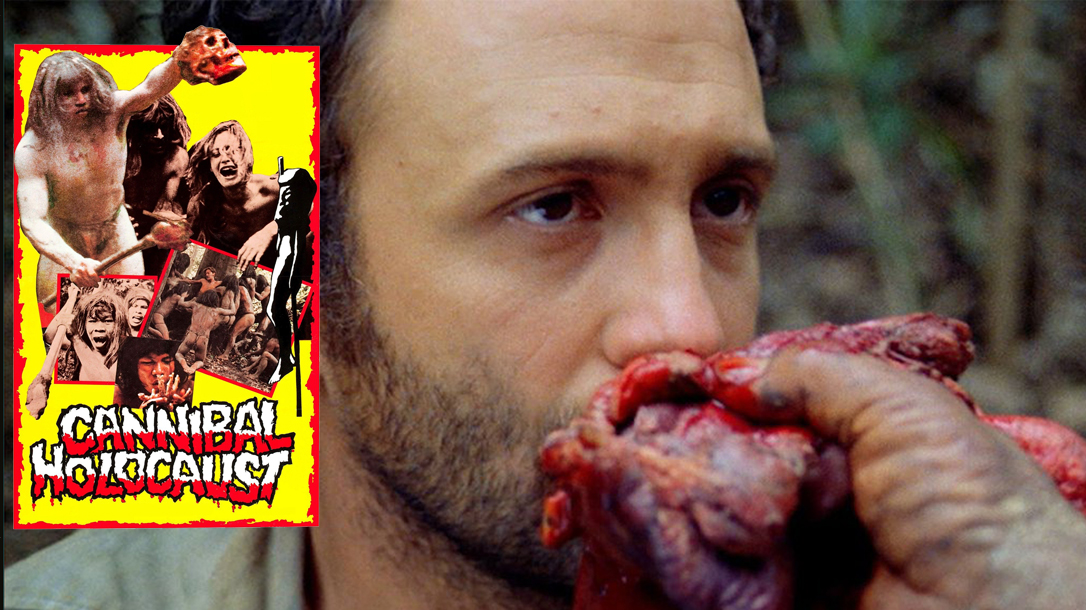 It is said that great artists suffer for their work. In January 1981, Italian director Ruggero Deodato was on trial in Italy because the courts believed he made others suffer for his work. His latest film, 1980’s Cannibal Holocaust, was a little too real for some audiences.

But the actors weren’t dead; they were just laying low, as per Ruggero’s instructions. The director told them to stay out of public view as the film released worldwide. He never thought he would be accused of making Cannibal Holocaust a snuff film, however.

Cannibal Holocaust isn’t a snuff film (for humans, anyway), but it’s not an easy one to watch. It’s also slightly racist, but as you’ll see, that is the least of its problems.

Cannibal Holocaust is the first “found footage” type of horror movie, and takes place in the Amazon Rainforest. As far as 80s horror movies go, it’s out there. A documentary film crew becomes lost in the jungle, and a search party dispatched to find them. It is later discovered the crew ran into some cannibal tribes there.

Spoiler alert: The meeting did not go well for the filmmakers. The search team finds the crew’s film reels and returns to New York with them. The found footage shows just how bad things went for the crew, but it also shows why. It turns out that the “documentary” crew staged a lot of terrible things for their movie. This includes the mass slaughter of tribesmen—the actual cannibal holocaust—and the brutal rape and killing of a tribal woman.

The cannibals killed the film crew in retaliation for filming a horrific movie using real people, especially the young girl. The three men of the crew are killed, then the lone woman is given the same treatment the filmmakers gave the young native girl. Then they get eaten.

That’s a very nice way of explaining how she was gang raped and impaled. It’s a film about media sensationalism presented in the most sensational, exploitative way possible.

It should be mentioned that every one of the cast members were pretty uncomfortable with most of the graphic violence in Cannibal Holocaust. And they should have been. Lead actor Robert Kerman called the director a “sadist.” Actor Carl Gabriel Yorke’s rape scene was apparently so graphic that it deeply affected his emotional state, and he broke up with his girlfriend when he returned home.

A Dedicated Cast and Crew

Two other cast members exhibited symptoms of post-traumatic stress disorder during filming, and crew members vomited after certain scenes. Any number of on-set events could have triggered these symptoms. There was the constant humiliation of female lead Francesca Ciardi. There was an incident where life nearly imitated art when local tribespeople used as extras were forced to stay in a burning hut for a little too long. Or, it could have been the real, onscreen killings of animals.

Though it wasn’t necessary for the film, the filmmakers shot a pig, killed a coati (a native mammal related to a raccoon), slaughtered a turtle and killed a spider monkey. The spider monkey scene is what made the crewmembers throw up.

The Court of Public Opinion

Animal death is what originally landed Deodato in jail when he was arrested for obscenity and the film was confiscated by Italian authorities. Even though it was taken out of circulation within ten days of its premiere in Italy, word of mouth began to spread about this movie called Cannibal Holocaust, and stories surfaced that the actors were killed in the production. The actors had all signed contracts to disappear from the public eye for a full year, so they weren’t helping any.

So, until the actors showed up, Ruggero Deodato was charged with their murders. Since this was the first-ever film that blurred the lines between documentary and fiction, the courts could hardly be blamed for thinking the actors were dead. The courts dropped the charges when their bodies appeared in court, fully alive.

And while Deodato beat the murder rap, he was still prosecuted for obscenity for his animal snuff film. Cannibal Holocaust is currently banned in 40 countries, but it is available to rent on Amazon Prime.