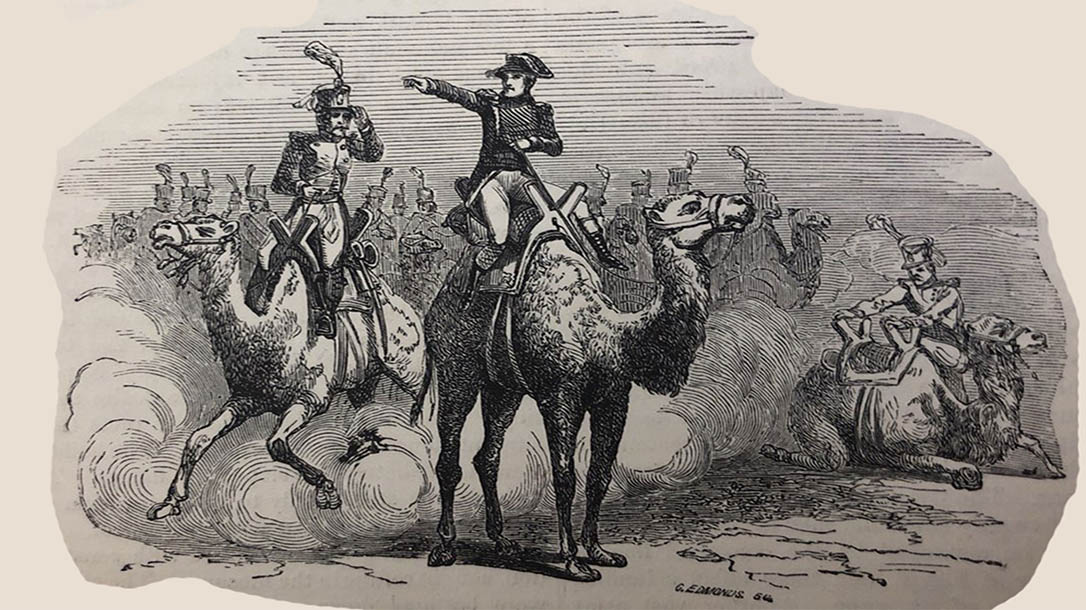 Camels are superbly adapted for the desert. They are an animal of unsurpassed endurance and durability, making them the ideal beast of burden, especially in unforgiving climates. They store fat in their humps, meaning they can go at length without food. Their stomachs can hold up to 25 gallons of water in a single drink, and their renal system and other organs process water with unrivaled efficiency. Camels can carry more weight than horses and mules, travel further distances, and require far fewer stops for food and water. For these reasons, it’s obvious why camels have been used for centuries. What’s interesting, however, is camels have had an exciting history as steeds for combat units, especially against traditional cavalry. Our idea of camels as boring pack animals may not be accurate. Enjoy this collection of stories from the odd history of camels in warfare.

In roughly 815 BC, the Assyrians looked to conquer India but had to figure out a way to combat the formidable Indian war elephants. To frighten and disrupt them, the Assyrian queen Semiramis ordered the construction of hundreds of dummy elephants made of stuffed ox hide. Each contained a man to move the trunk and a camel to move the entire dummy. The Indian elephants were unfazed and eventually tore the dummies to shreds, but an exciting discovery was made. The Indian cavalry charged the dummies but was so spooked by the camel smell they turned and fled. Interestingly enough, the odor a camel produces is, so off-putting to horses that the effect is disorienting. This discovery led to some surprising outcomes in ancient and pre-modern battles that may have impacted the course of history.

​In another ancient account, the Persians used camels to thwart traditional cavalry in much the same way. The Lydians, who outnumbered the Persians, had an elite javelin-equipped cavalry corps renowned for their effectiveness. King Cyrus was aware, however, that the Lydian horses were unfamiliar with camels. Cyrus took 300 camels from his supply train and placed them along his front. When the Lydian equestrians attacked, their horses were spooked so severely by the camels that the riders had to dismount. After getting down from their horses, the cavalrymen were sitting ducks for Persian archers. The Lydian Army was driven back to their capital which the Persians soon conquered.

​In 1398, Mongol Emporer Timur sought to conquer the Indian capital. The Indian Army had an impressive 120 armored war elephants at their disposal. However, Timur devised a clever plan using camels to take them out of the battle. He loaded his pack camels with bundles of oil-soaked kindling and lit them on fire before pointing them toward the Indian line and sending them off. The charge of terrified flaming camels was enough to send the trained and armored war elephants into a frantic retreat. The Indian Army was then crushed and the city of Delhi taken.

​ In 1686, during the Ottoman invasion of Hungary, ottoman artillerymen came up with the idea of equipping camels with cannons firing 3lb projectiles. The image below is a contemporary illustration of the experimental units.
Remarkably, these units saw action in a real battle against the Hungarians. Still, the camels became injured by the cannons and unable to retreat quickly, defeating the purpose of a mobile light artillery unit. This was, however, history’s first attempt at light artillery and rather forward-thinking in that respect.
​Our most modern example comes from the mid-19th century US army, which fielded an experimental camel corps for use as pack animals in the arid American southwest. The camels, which were brought over from the Mediterranean along with trained camel handlers, proved impressive compared to the horses and mules the Army was using up to that point. Soldiers remarked on the camels’ ability to go ten days in the stifling heat without water. Their ability to carry more weight than mules or horses, and eat cactuses along the way. However, they did complain about their stench and propensity to spit “a large gelatinous, foul-smelling mass of cud at people they didn’t like.”

Built For War And More

Also, unsurprisingly, there were reports that the smell of the camels upset the horses. Early in the civil war, confederate forces captured Camp Verde in Texas along with the Army’s 70 camels. The camels were sold or released into the wild to fend for themselves, and the Army never revisited the camel idea after the war. As a lasting testament to the camel’s hardiness, however, Feral camel sightings in the southwestern desert were reported as late as the 1940s.

​Given their speed, durability, size, and strength, it’s a bit of a wonder why camels weren’t used more. A major contributing factor is likely that horses are much easier to work with. In addition to smelling particularly bad, camels have a mind of their own. Meaning it takes great skill to train and handle one. Regardless, it leaves you wondering if many cavalries may have been better off using camels in their horses’ stead.