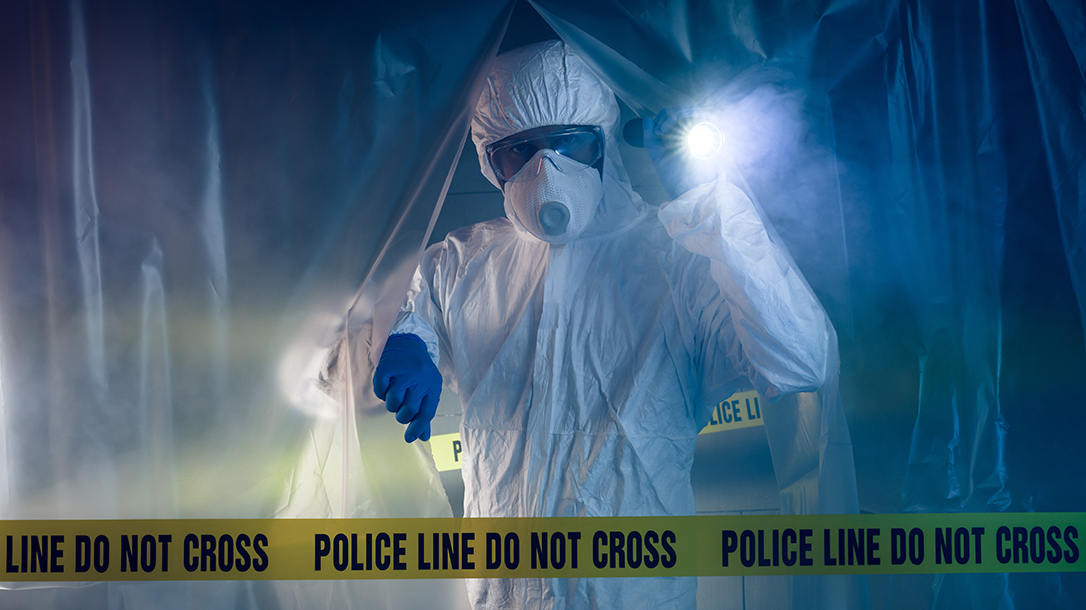 Call In The Wolf: We All Die…Cleaning Up The Crime Scene

Getting into the postmortem cleanup game is more than just a job—it’s a dirty job and a life-altering experience in which you can expect to see, smell and discover things that will stick with you for a lifetime.

Cleaning up after a death—whether it has been caused by homicide, suicide or natural causes—isn’t an ordinary cleanup job. Training requirements for getting into this business include instruction in biohazard procedures and an in-depth knowledge of industry regulations for waste disposal, both of which are time consuming and are acquired at a cost. These costs are both monetary and psychological.

This business also requires certification, and finding an accredited and reputable program to gain this certification means doing your due diligence. This is well worth the time and effort required because this profession exposes both yourself and those working around you to potentially hazardous environments, including exposure to bodily fluids with all their possibilities for carrying bloodborne pathogens and other toxic contaminants. Some training providers also offer online courses that include content related to operating such a business and how to make proper business contacts in your area.

Cleaning Up The Crime Scene

Contamination at the scene of a death is always a major concern. According to retired fire department battalion chief John Maggio, “I remember responding to a call of an unconscious patient. When we arrived, we found an elderly female lying in bed, not breathing. As we attempted to treat the patient, she started to excrete a dark brown liquid from her ears, nose and mouth. The smell was overwhelming. Emergency room personnel had never seen this happen to a patient. They had no idea what the brown liquid was, and we still don’t know what we may have been exposed to.”

Every death-scene cleanup job must be treated with the same precautions, regardless of the cause of death. Each scene also has to be considered potentially dangerous. These cleanup professionals never assume the site of a death will be static or safe, and they always have to respond with the proper safety protocols. Each scene must first be assessed, and then a whole range of questions must be addressed before cleanup can begin. Are there any hidden hazards still on site? What kinds of bodily fluids are present? The list of things to consider is extensive.

Unfortunately, calls for cleanup often involve deaths by suicide. “By far, the most graphic scenes involve the use of shotguns. I will forever carry with me the anguish of the families who discovered the bodies of their loved ones,” says Rae Toll, a former U.S. Army combat medic and the owner of Decon Squad of Evansville, Indiana.

The blood spatter can be extreme. “We were called to a suicide by shotgun where a 50-year-old male went up to his attic and shot himself. The blood, hair, brain matter and even his teeth were everywhere. Some particles were stuck to the ceiling and on nails coming through the roof. This job took five days to clean up in 120-degree weather. We had to bring down every box and item that was stored in the attic to clean them to make sure that nothing ricocheted inside the boxes. Some items were saturated in bodily fluids, which requires disposal in accordance with biowaste removal and incineration procedures,” says Toll.

Death-scene cleanups at hoarder houses are generally the worst. Walking through the door, you are immediately hit with the smell. “It’s the distinctive smell of iron from the blood,” explains Toll. Many of the deceased not only hoarded belongings, but also their own urine, feces and even animals. Generally, a full-face respirator is required just to enter such a structure. Toll relates, “There was one woman who had over 20 cats and dogs along with miscellaneous reptiles and birds.

She decided that she couldn’t do it anymore and left them all locked in the house and ran off. The urine and feces were about 4-6 inches deep throughout the entire house. The animals had started eating each other in order to survive, and they fought over the water in the back of the toilets. The walls behind the toilets in the bathrooms were covered in blood. Only four dogs and a turtle survived the ordeal.” Toll adds, “The woman was later found and went to jail.”

The amount and types of cleanup in hoarding situations are often different, depending upon the scene. Sometimes it is as simple as cutting up carpet and removing it, but it can become as involved as removing the subfloor and getting into crawlspaces to completely sanitize the area. Hoarding cleanups typically require several dumpsters to remove everything. Animal hoarding usually requires gutting the entire house.

Regrettably, someone has to be the first to find a deceased’s body, and whoever encounters a presumably dead person needs to be cautious. First, try to determine if the person is breathing or has a pulse and then notify emergency responders immediately. It is essential to try to preserve the area around the deceased in case it turns out to be a crime scene, so don’t touch anything.

Once you do this and the investigation and gathering of evidence by the police come to an end, this is when the decontamination and cleanup professionals begin their grim work. These jobs are never pleasant and are always tragic to a degree, but it is essential work that will never disappear as long as we continue to exist as a species. And believe me, this work is not for everyone.