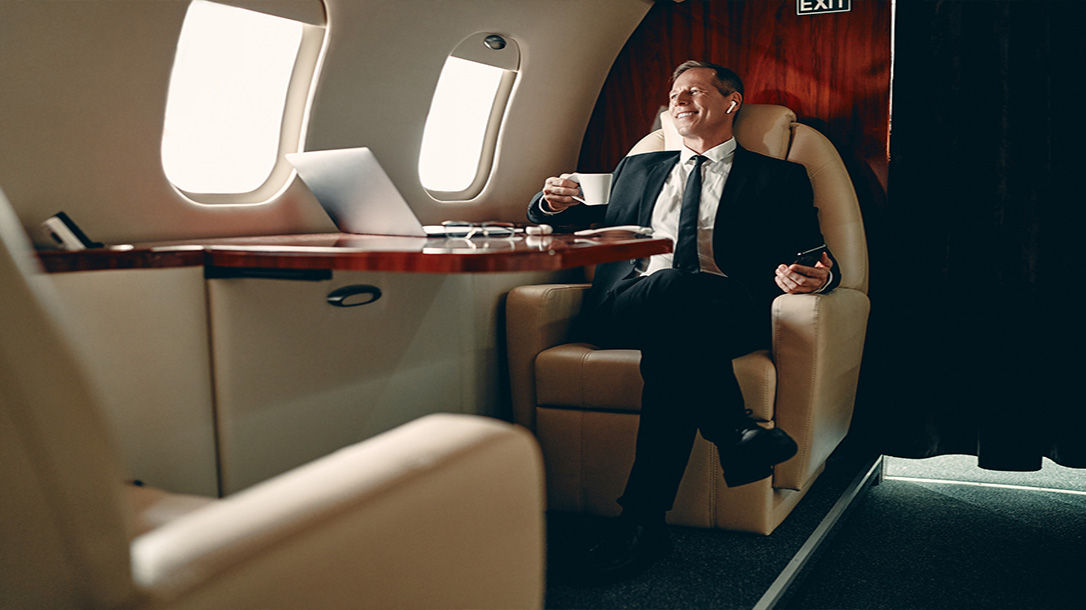 Why They Should Bring Back The Men Only Flights

Men-only flights may seem like a pipe dream, but it was once a fleeting reality. The 1950s and 1960s may have been a tumultuous time for America, but everything was peaceful and calm aboard two airline routes. The only troubles we had for a few short hours were how we wanted our steaks and if we’d like another cocktail.

Between 1953 and 1970, one airline offered men-only “Executive” flights between New York, Chicago, Los Angeles, and San Francisco. The Dreamliner might be a new airplane, but these pioneering flight segments should at least qualify for the nickname.

Today’s in-flight experience is radically different than it once was. Airplanes are little bastions of fascism flying above the world’s most powerful democracy. Passengers literally lose their constitutional right while aboard aircraft. Freedoms of speech and expression are curtailed, as is protection from searches and seizure. It’s true; look it up.

To top it all off, people are at their worst on airplanes, and it’s totally understandable. Most people are tired, cramped in economy class, and given one non-alcoholic drink to sustain them for who knows how long. If we’re lucky, only one baby is screaming as the altitude pops its ears.

Air travel these days is dreaded for a good reason. People who fly these days tend to treat their economy ticket as an excuse to wear pajamas, pop off their sandals, and treat their 31 inches of legroom as their bedroom.

Business travelers fare a little better. Sure, there’s a bigger seat, more leg room, and complimentary adult beverages, but the food (when there’s any to be had) is usually a small bag of snacks. Plus, it’s altogether likely you will still hear two kids arguing over an iPad in economy class.

Then we all have to arrive at the airport hours in advance so we can be groped and searched by the TSA, a first line of defense that could be decimated by a physical fitness test and wouldn’t be trusted to guard a parking lot anywhere else.

It wasn’t always this way.

Back In My Day

Imagine getting through all that to board your 5 p.m. men-only flight, one that offered free cigars, cocktails, and a steak dinner. The DC-6 that would ferry you to America’s top business destinations would be decked out with plenty of legroom for your comfortable seat if you chose to stay seated. There was also a lounge available if the seat didn’t suit you at the moment.

Whether you’re a business traveler heading home after a long trip, on your way to start a business trip, or just a guy who wants a good airborne experience, you’d have a meal prepared by a Continental chef and served up by a skilled flight attendant, née stewardess.

​Surprisingly, it was all brought to us by United, the airline best known for killing puppies and its famed “United Airlines Fight Club.” A men-only flight on this level would be enough for any guy to rejoin the Star Alliance, secure in the fact that neither he nor his dog would come to any harm.

There were other perks for the business traveler flying the New York, Chicago, Los Angeles, or San Francisco “Executive” flights, but they are all antiquated by today’s technology. These included having flight attendants send any final messages you might need phoned out before the plane takes off, getting the final stock quotes of the business day, and having the latest business magazines on hand.

They would also bring executive passengers a whole table at which they could do their business work if it were requested. In today’s terms, that means a lot of extra space aboard the flight, which would likely include free wifi access along with that steak and booze special.

Air travel used to be a more enjoyable event, and not just for men. There was a time when airplanes had sleeping berth seats, even for economy class passengers. Every seat on the plane could be turned into a mini bed. Planes also had ladies’ lounges, wet bars, swivel chairs, seven-course dinners, fresh flowers, and even piano players.

The men-only executive flights ran from New York’s LaGuardia Airport and Midway in Chicago until 1961, according to the airline news blog View From the Wing. It was moved to what is now known as JFK Airport to Chicago O’Hare after that. Then the New York leg was moved to Newark before the service was eventually shuttered.

Of course, these days, airlines can’t exclude women from boarding special flights, no matter how totalitarian their control over the aircraft can get. Maybe an adults-only flight isn’t out of the question. It isn’t asking too much for people to leave their onesie pajamas in their checked baggage in exchange for a flight with good seats, free drinks, and food that looks edible.