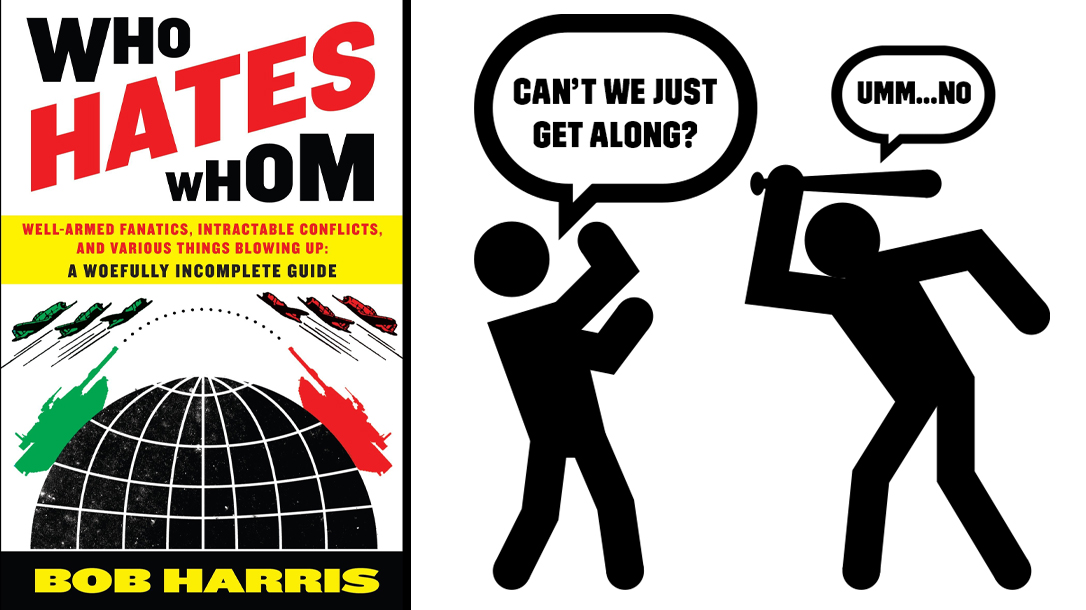 Review Of Who Hates Whom: Well-Armed Fanatics, Intractable Conflicts

Although it’s been some time since any of us have sat in a school classroom and probably even longer since we took a long nap during history class, it’s always very important to seem like you are the smartest person in the room. Especially when it comes to the discussion topic of war history and associated conflict-related chats. The good news is that the book Who Hates Whom is the quintessential “Cliffs Notes” version of different conflict histories and current events of countries that hate each other and why in dangerous world conflict zones.

The benefit of paging through this gem, of course, is to help you sound like a resident battle professor at your local watering hole. People will be amazed by your brilliant recollection of historical contexts. A more enjoyable component of this read is that the book is written and explained in a down-to-earth, Archie-Bunker kind of way—sort of like you were listening to a drunk uncle lecturing accurate history at a family picnic.

The author does an excellent job of pointing out that the book is meant to be a handy reference guide for when you see something explode on CNN or Fox News. It also recommends strongly against looking for good guys and bad guys at war with each other because conflicts are rarely only two-sided and typically are far more complicated. He also adds that in many complex situations, there are sometimes two marginally bad guys or sometimes three bad guys, and sometimes no good guys are present at all.

This guide also discusses taking a look at the history of the United States for all of its faults, as compared to other parts of the world. The good old USA—it truly is the world’s best example of a country where people from literally the entire planet come to live and also manage to hang out with each other in peace. Except for Chicago, of course.

Likewise, the book does a fair job of explaining the differences present in the Middle East. It likens Shiite and Sunni relations to conflicts between Catholics and Protestants. Both branches worship the same God, praise the same prophets, make the same pilgrimage to Mecca and read the same Koran. The author discusses how, in theory, both groups should get along just fine. However, due to some unique differences, which he points out, their conflict with each other is challenging to understand from an average, American point of view.

A historical, narrative picture of the problems in Kashmir, where there are many countries involved, including Pakistan, India and China, is examined as well. There is even a discussion of the myriad separatist groups involved, and apparently none would be able to get along if they all walked into a party together. Of all the hotspots in the world, Kashmir seems to be one of the most persistently conflicted.

A clash between nuclear powers in this region seems almost inevitable, especially between China and India. They just don’t care for each other very much. In May of 2020, Chinese and Indian troops engaged in a pretty ugly skirmish in that area, which resulted in casualties on both sides. That said, the good news is that, for the time being, things have calmed down a bit.

How To Be A Dictator

Finally, there is an additional, enjoyable chapter that offers an easy, step-by-step guide for aspiring dictators about how to start a war in 10 easy steps.

Detailed with more than 50 original maps, photographs and illustrations, Who Hates Whom summarizes more than 30 global hot spots with concise and eye-catching diagrams. It even shares a few laughs and has a glimmer of kindness and hope at the end. The book is available on your favorite retailer website and can also be purchased used on your favorite auction website. It is a highly recommended, well-written work that should be in any tough-guy armchair military historian’s library.