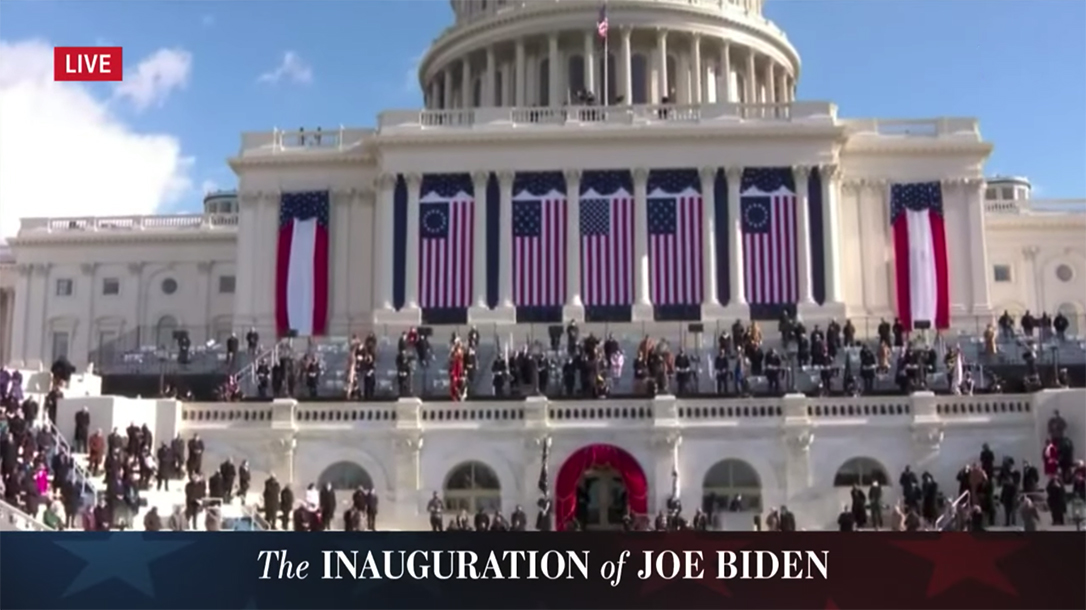 While taking the oath of office on Wednesday, Jan. 20, 2021, President Joe Biden proclaimed that it was time to put aside our differences and to work towards unity. Whether that’s even possible remains to be seen, but one can hope. However, it’s certainly worth noting that he made those remarks with a purported symbol of hate just behind him hanging from the Capitol Building: the Betsy Ross Flag.

The Recent History of the Betsy Ross Flag

No, it wasn’t a left behind “Trump” sign or a Confederate flag carried by protesters during the unfortunate breach of the Capitol Building two weeks earlier. No, what hung was actually the original American flag with 13 stars, commonly referred to as the “Betsy Ross Flag.” As seen above, dual flags draped the side of the building during the inauguration ceremony.

Once considered a symbol of patriotism dating back to the American Revolution, its reputation has been tarnished in recent years. Consider it a case of “guilt by association” with moments from our nation’s past.

Former Republican Wisconsin Governor Scott Walker was among those who took notice of the flag. He addressed the issue directly from his Twitter account:

That seems like a very fair and honest question, and Walker wasn’t the only one asking that question. “Business Insider” columnist Josh Barro also Tweeted about it:

Again, a fair and honest sentiment to an issue that stirred quite a controversy in the summer of 2019. You may remember former NFL quarterback Colin Kaepernick called out Nike for putting the flag on the back of its patriotic-themed Air Max 1 Quick Strike Fourth athletic shoes.

The out-of-work footballer argued that the shoes represented the slavery era. As I reported with “Ballistic Magazine” at the time, Nike pulled the shoes in early July 2019, just days before the red, white and blue sneakers were set to hit the U.S. market to commemorate the July Fourth holiday.

Betsy Ross Flag in the Crosshairs

Worth noting is that Kaepernick wasn’t the first to try to tie the flag to America’s supposed racist past either. Three years earlier, people call out the flag as a symbol of racism because it was used alongside the Patriot Movement and by supporters of then candidate President Donald Trump when it was hoisted during a high school football game in Grand Rapids, Mich.

The controversy over the flag grew significantly louder after Kaepernick made his case. Many in the mainstream media were also quick to brand it a symbol of hate. “Newsweek” even suggested the flag was an issue simply because of its use in a time when “America was a slavery-driven and openly racist country.”

That, of course, is true about many other facets of this country. However, even statues of Presidents Abraham Lincoln and Theodore Roosevelt have been vandalized by the extreme radical left in the years since. With that in mind, it’s not surprising that a flag carried by patriots is so misunderstood and hated.

A Symbol of Hate?

The Betsy Ross Flag—which, ironically, old Betsy may actually have had little if anything to do with—is just one of many flags tied to racism by the media. However, it’s worth talking about how the flag has been seemingly redeemed so quickly. Perhaps we need to ask why it was on the Capitol Building if it’s indeed a symbol of hatred and oppression.

And that’s what we’re doing here. There’s nothing wrong with the Betsy Ross Flag hanging there. Hell, it’s actually a good thing. But why was it a problem two years ago on a pair of sneakers and now it’s OK? The easy answer is that the flag suddenly is about patriotism again simply because of who’s in the White House. But that’s hypocrisy at its finest, and it needs to be called out.

For the record, the same flag hung from the Capitol Building in both 2009 and 2013 when President Barack Obama took the oath of office, just as it did in 2017 when President Donald Trump was sworn in. And perhaps that is where the issue gets tricky.

This article isn’t meant to be divisive. We’re the United States for a reason. Let’s remain United. But it’s a fact that the media and more Liberal members of our country branded the Betsy Ross Flag as racist in 2019 when Trump was in office. Fast forward two years with Biden now in office and suddenly the flag is fine to let fly again.

You can’t keep changing the meaning of a symbol to fit a certain narrative; and that’s exactly what’s happened here. There was no “Newsweek” report on the flag at Wednesday’s inauguration. Kaepernick didn’t issue any statements. It was suddenly just OK again. Where’s the outrage that we saw in 2019? Hypocrisy is a powerful drug, isn’t it?