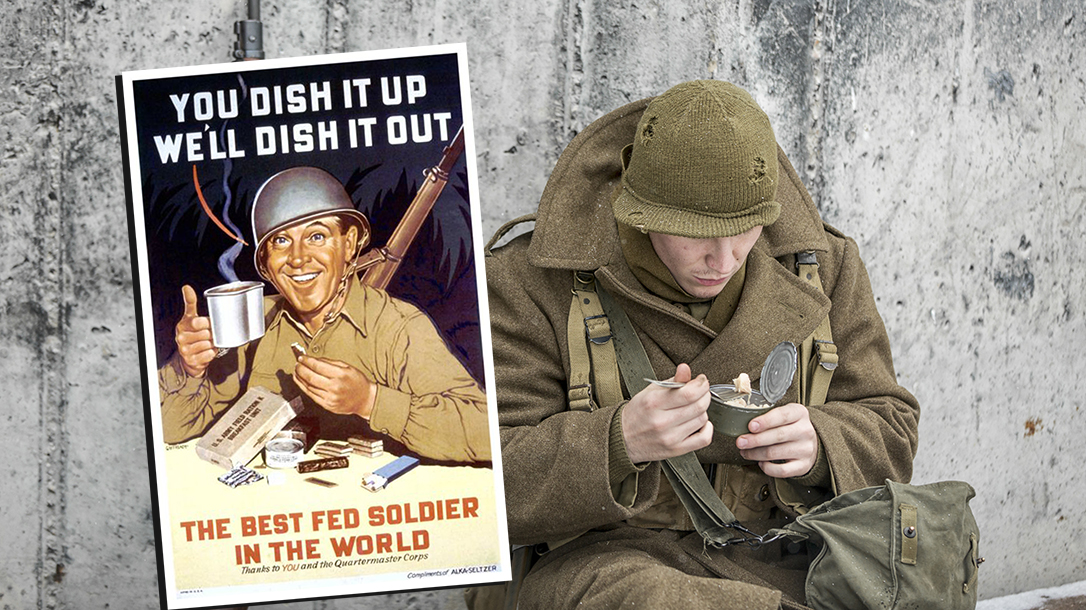 Want My Omelet? The Best and Worst of US Military Rations

While many think war is all about tactics, strategy and fighting, in actuality, logistics are just as important. This is especially true when considering the size, scale and speed of movement that characterizes modern war. Feeding troops has often been the difference between winning and losing. As the great Napoleon Bonaparte said, “An army marches on its stomach.”

When World War II came and the fully industrialized nature of the conflict was realized, the U.S. Army started packaging portable field rations in a manner today’s soldiers would recognize. Before World War II, rations were handed out daily and contained no variation. As soon as prepackaged meals of different varieties came about, a barter economy quickly emerged. This is the story of which field rations have been hoarded and sought after and which ones have gone to waste or have been eaten only begrudgingly by hungry troops.

The longest-running military ration, C-rations were in service from World War II up until the ’80s when they were replaced by the MRE. Technically, the C-ration of the Vietnam-era was a different thing than the World War II C-ration, but troops still called it a “C-rat,” and it was very similar in packaging and content. C-rations featured options that included a variety of entrees, like spaghetti and meatballs, turkey loaf, ham and eggs, etc. They would also contain canned fruit, some form of bread or crackers, and a dessert of either pound cake, a pecan roll or a fruitcake bar. The rations also contained accessories such as coffee, matches, chewing gum, cigarettes and toilet paper.

Each C-ration meal contained around 1,200 calories and was designed to be one-third of a soldier’s daily intake. Troops sometimes used portable stoves, heat tablets and even C-4 to heat these meals. They could be eaten cold in a pinch. Despite the fact there were quite a few C-ration menu options, soldiers quickly came to a consensus about which were the best and worst options.

The best C-Ration, as any Vietnam vet will tell you, was the ham-and-egg breakfast ration, and it was a delightful change of pace. Beans and wieners were also a favorite. When it came to sides, the pound cake was highly sought after and traded for, as was as the canned fruit. Tabasco sauce was also used liberally on everything.

While there is some debate among soldiers about what the best C-ration was, there is no argument over which was the worst. Unless on the brink of starvation, most soldiers could not stomach the ham and lima beans. The ham and lima beans entree was so universally hated, it quickly earned the nickname “ham and motherfuckers.” The dish was described as overwhelmingly salty, and despite consistent complaints from the troops about this meal, the military kept it on the menu until C-rations were replaced by MREs.

During World War II, the military developed K-rations to be a lighter-weight, more-portable version of the metal-canned C-rations. They were designed to be used by highly mobile troops who couldn’t afford to be weighted down. The K-ration came in lightweight cardboard boxes and had only three meal options. These were breakfast, dinner and supper.

As for the best K-ration, soldiers were not particularly happy with any of them since they were very bare bones. But the breakfast ration stood head and shoulders above the others for one simple reason: It contained coffee. Despite endlessly asking, troops never could get the government to put instant coffee in all the K-rations.

Regarding the worst K-ration, while the drink mix was not anybody’s favorite, the bouillon powder was the troops’ least favorite.

The “Meal, Ready-to-Eat” has been in service since the ’80s. They are the latest iteration of the lightweight field ration and have performed reasonably well since their introduction. MREs contain about 1,200 calories each and, again, are designed for consumption three times a day in the field. They are very lightweight, can survive a drop from 100 feet and have a shelf life of three years. MREs are not freeze dried and can be heated using water and a chemical contained within the package. Today, there are 24 MRE entree options available, including spaghetti and meatballs, beef stew, lemon pepper tuna and more.

There is little debate over the best MRE; it is the chili-mac MRE, and it is the ultimate crowd pleaser in modern military rations. Troops are never happy since it’s hard to make good meals cheaply and government officials don’t have to eat them. However, the chili-mac is universally agreed to be the best of the Meals Revolting to Eat. Chicken with noodles deserves an honorable mention.

The undisputedly suckiest MRE variety only in service from 2005 through 2008—was the veggie omelet. Nicknamed the “vomelet,” it looks more like congealed puke than it does any sort of an actual omelet. The military higher-ups tried to make it more desirable by adding Skittles (WTF?), hot sauce and even an off-brand pop-tart, but it was so universally despised that it was taken off the menu.