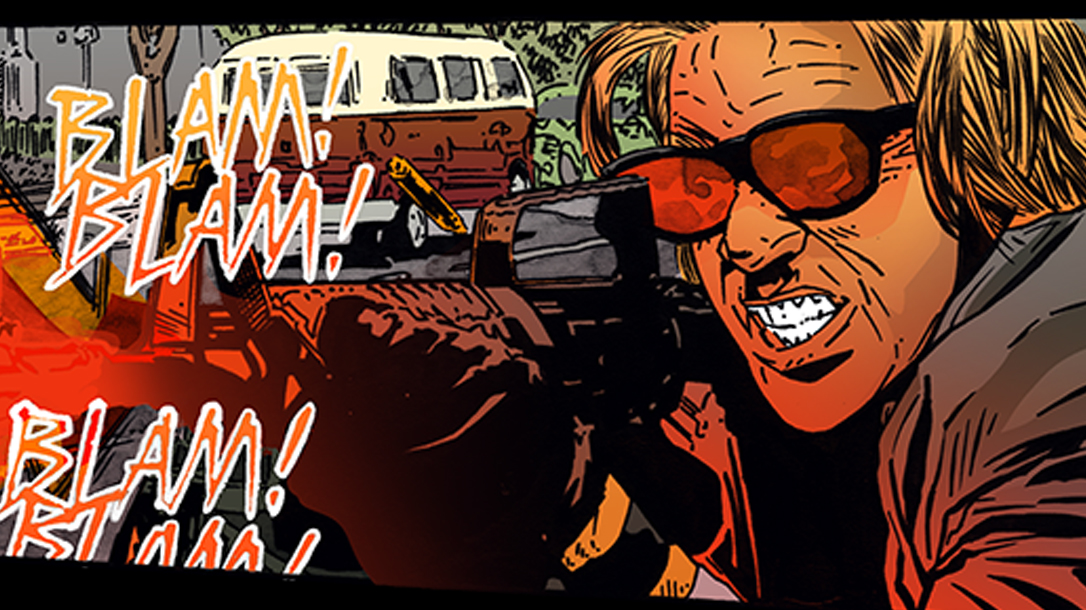 Are you that person that when movie shootouts start, your date or family takes a deep breath because they know for the next two hours they’re going to endure an onslaught of “That’s not how that weapon works” commentary from you? Or, when everyone else is excited about seeing their favorite actor on screen, do you uncontrollably blurt out, “How cool—they’re using a Galil!” at the television? If so, then you are one of us.

In this article, we have put together our top-five criminal shootouts in film. We feel these scenes are the best at portraying proper weapons handling. Now, you may ask, are any of the movies listed here 100-percent accurate? Please, do not make us laugh. Hollywood is in the fictional storytelling business. However, these cinematic shootouts do a damn good job of taking the time to make the real-world tools they use come to life on the screen.

“Don’t let yourself get attached to anything you are not willing to walk out on in 30 seconds flat if you feel the heat around the corner.”

From the king of crime drama, director Michael Mann (Collateral, Miami Vice, Dillinger) comes Heat. Taken from his 1989 TV movie, L.A. Takedown, it’s the gritty story of Los Angeles bank robbers pulling off one last giant heist. It also has what could be argued is the most realistic shootout scene all others should be judged by.

Rumor has it the bank robbery shootout was shown to U.S. Marines recruits at Marine Corps Recruit Depot San Diego for accurately showing how to retreat under fire. Val Kilmer’s reload while taking cover behind the car is the stuff legends are made of!

Much of the realism was due in part to the technical advising of Andy McNab and Mick Gould (former 22 SAS), who has advised on other films such as Collateral, Ronin, The Equalizer 2 and Miami Vice. Gould trained the actors for three months, rehearsing the scenes with live fire on a sheriff’s department’s range. Mann also cleverly set microphones around the set to capture the true sound and echoes of the gunfire rather than use sound effects in post-production.

The Way Of The Gun

Part film-noir in style, while paying homage to western classics, The Way of the Gun is often called “the coolest action movie you’ve never seen.” It portrays a pair of low-level criminals who face a choice between petty crime or minimum wage who get in over their heads when they kidnap a surrogate mom for ransom.

Director Christopher McQuarrie’s brother Doug, a former Navy SEAL, was the advisor on the film, which accounts for the realistic weapons handling. The cast practiced room clearing, covering movements, transitioning and more. This training and weapons handling throughout the film greatly lends to the believability of the story.

The last scene at the hacienda—reminiscent of old Westerns—has no shortage of blood or practical effects. How many times have you heard weapons instructors talking about the need to practice reloading with one hand while injured? Both Ryan Phillippe and Benicio Del Toro’s characters use these techniques when forced to change mags while under fire and injured in the final shootout.

“We all dream of being a child again, even the worst of us. Perhaps the worst most of all.”

With violence that was truly brutal and bloody, The Wild Bunch was a Western that was worlds away from any John Wayne or Clint Eastwood film. Set in 1913, the world was shrinking and times were changing for an aging outlaw gang that steals guns for a Mexican group during the revolution. They know they have run their course, and the changing world doesn’t have room for them.

Before the wild “shoot ’em ups” from Hong Kong and bloody Tarantino finales, there is “The Battle of Bloody Porch.” In this scene, the gang walks in prepared to die—four versus hundreds. William Holden’s Colt M1911 catches the eye of the German advisor at the table who asks him how he got a restricted firearm. Moments later, after a true “Mexican standoff,” William Holden calmly focuses his 1911 on the same advisor and shoots him, setting off the gunfight.

Director Sam Peckinpah was a former Marine and an avid shooter. The cast went through four weeks of rehearsals on the scene. Once it was time to film, he used thousands of blanks and hundreds of squibs during the firefight. The carnage on set was so gripping that Ernest Borgnine found his stand-in, a veteran of Patton’s Third Army, crying because of the memories that flooded back.

Long in the tooth now, this scene is still a watercooler topic of discussion today.

“Well, John wasn’t exactly the boogeyman. He was the one you sent to kill the fucking boogeyman!”

Unless you’ve been living under a rock the past few years, you’ve seen the video of Keanu Reeves training. Since then, Taran Tactical has become the go-to trainer for actors and film directors.

John Wick’s “Circle Club” scene, while edging on the unbelievable at times, demonstrates Wick’s proficiency at killing. This is thanks in part to Keanu Reeves taking his role seriously. Combine his gun training with the physical training from fight coordinator Jonathan Eusebio, and you have a violent yet elegant ballet that begins stealthily before erupting into a full-fledged gunfight. This is the “boogeyman,” after all—non-lethal injuries are followed up with head shots as necessary.

Wick’s “Fortis Fortuna Adiuvat” tattoo harkens back to his time in the 3d Marine Regiment before becoming a lethal assassin. What can you say? In a time when Hollywood seemed only to be making superhero and “safe-place hashtag films,” we had the beginning of the gunplay-heavy John Wick franchise.

Never touch another man’s car or pet, and you’ll live a happy life.

“I kill a communist for fun, but for a green card … I’m gonna carve him up real nice.”

Before the eruption of Mexican cartels, we had the OG Colombians. A year before “Miami Vice” brought the Miami drug scene into homes with early-80s pastels. Tony Montana, “a political prisoner from Cuba,” taught us what it took to “get the power,” albeit temporarily.

In the twilight hours of his dynasty, we see them invade Tony’s mansion, attempting to end his reign. It is at this moment in time that he introduces audiences to the M203 … well, a custom-made prop M203, anyway, that fires shotgun shells. They had five replicas built for the film. One of them used years later in Predator. Another launcher, attached to a replica M16, sold at auction for over $50,000.

On set, Al Pacino learned a life lesson most of us who grew up around firearms probably did at a much younger age. After emptying a couple mags, he touched the barrel. In his case, the burn was bad enough that it sidelined him for a few weeks of production.

Montana taught us that with enough coke pumping through your veins, you can turn into an Energizer Bunny that can take numerous rounds and just keep going and going and going …

If you’re a fan of action movies, check out our podcast Skillset Live!  Get in on the conversation on our social media pages or pick up a back issue at OutdoorGroupStore.com!