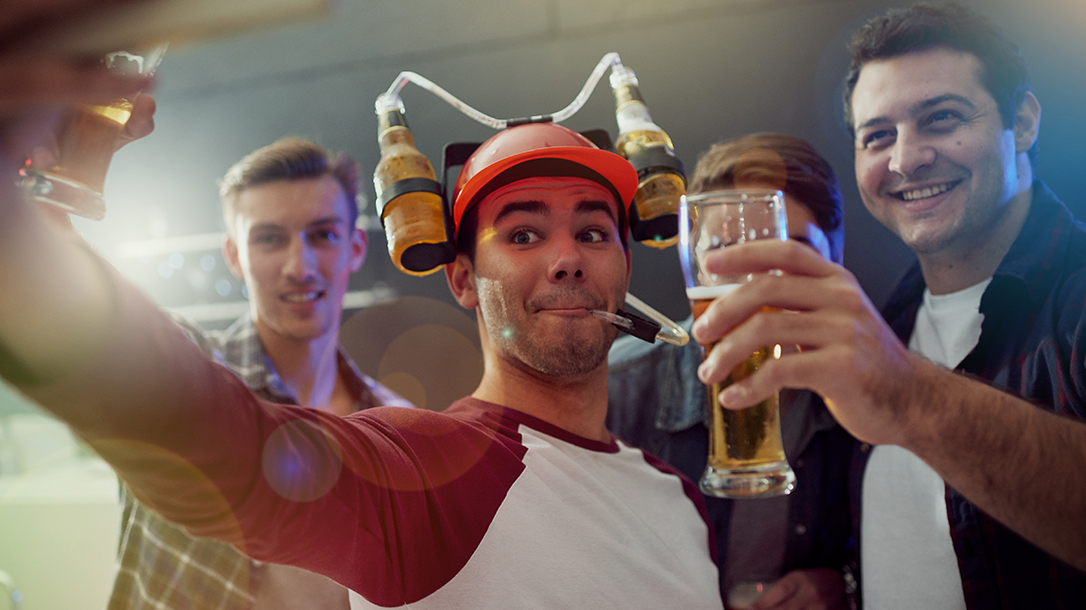 “Chug! Chug!”—how often have we heard that as college students, with teammates at a post-game party or among coworkers and friends during a crazy night out. The pressure to consume copious amounts of beer as fast as possible has been a rite of passage for many Americans when kegs or cases of beer are in high supply. Beer consumption happens across the globe, yet in America, we make games out of anything. If beer drinking were a competitive sport in the Olympics, what would it look like? Would there be a single kind of beer as a universal standard, or would there be various kinds of beer? Would the USA be the Gold Medal favorite? To consider how to create the first Beer Olympic Games, no bottle or can must go unopened.

The Beer Olympic Games Are Here!

Drinking beer has been a standard activity in America for a few centuries. The U.S Marine Corps was founded in a tavern—not a shabby start to American dominance in military and drinking affairs. Before anyone thinks that America will sweep the beer games in the Olympics on account of college drinking games or military hazing challenges featuring Budweiser, Coors Light, Milwaukee’s Best and Miller Genuine Draft, think again. Belgium, Germany, England, Ireland, Canada, Australia, the Czech Republic and the Scandinavian countries became known for their beer drinking. The quality and substance of beer brewed from international countries goes back several hundreds of years in some cases, and overall, those beers are quite superior to American brands, with exceptions for American craft beers. Years of throwing back sturdy pints of beer at local pubs where their grandfathers drank gives a strong advantage for the global competitors.

The American advantage is in the fact that drinking, introduced many youngsters as a competition. From chugging beer the fastest to demonstrating dexterity, aim and cool nerves with quarters and ping-pong balls, many future American beer olympians have endured a baptism by liters of Bud Light, foam and shame in their formative years.

Bring Forth The Competitors!

Much like many other Olympic sports, one could possibly compete in beer drinking as an individual or as a member of a team. Identifying which games make it into the Beer Olympic Games out of the many dozens and dozens of choices that exist is no easy task. As for the type of beer used, lagers seem to be a type of universally appreciated beer; the exact brand(s) could easily be determined by an international panel of experts.

Bounce a quarter off a table into a plastic cup or glass filled with beer. The person who makes the quarter bounce successfully into the cup selects who drinks the whole cup. If a person can successfully bounce a quarter into the glass three times in a row, he or she can then institute a new rule to further confuse other competitors into making mistakes.

These rules might include, “You must drink with your left hand” or could have opponents say out loud, “Remember the Alamo!” before each time they drink. Spilling any beer is a foul that results in a penalty, requiring the violator to drink another cup. The final three competitors who have not quit, passed out or thrown up will make it to the Olympic podium. The last person standing is the gold medal winner.

There are various ways to play Thumper; some rules have the individual select a hand gesture to identify themselves, and other rules require a nickname. For Olympic competition, on account of the foreign competitors who don’t speak English, a hand gesture will be used. The participants, numbering in eight for our purposes, gather around a table and thump their hands on the table. The leader of the round will make a funny hand gesture of their own and then a gesture of another competitor, who must then repeat the first gesture of the leader, then their own gesture, and then another competitor’s hand symbol. (Confused yet?) Around the table this process continues until someone messes up a gesture or takes too long to display the gesture. Then the violator must drink a full 12-ounce glass of beer. Just as with Quarters, the last one standing is the winner.

Participants start with a 6-foot funnel and increase the height each successive round until a winner is established. Failure to drink the whole funnel or any spillage will result in disqualification.

This is a real event with its own world record. A 12-ounce beer is consumed at the start of the race and again after every quarter mile. The first to finish is the gold medal winner.

Participants drink 8 ounces each of an ale, a lager, an IPA, a seasonal and a stout (for five types of beer total) as fast as possible. Numerous heats of eight contestants are held until the field is down to the fastest eight, of which the top three finishers are determined in the final round.

The ultimate classic, played as doubles, places competitors on each side of a ping-pong table. Players toss or bounce a ping-pong ball into one of their opponents’ ten red Solo cups full of beer aligned in a pyramid. If the ball lands into the cup, the beer is consumed, and the cup is taken away. The team that runs out of cups loses, and the winning team advances to the next round.

Not the Ron Burgundy game, but a team version of Quarters. Teams of three people each face off with the purpose of bouncing a quarter into a pitcher of beer. The teams trade turns until three quarters bounce in, requiring the other team to drink the whole pitcher of beer. When the pitcher is empty, it must pass off to a teammate, and the anchorman must finish the whole pitcher. The team that can’t finish the pitcher successfully loses, and the other team advances.

Like with the Beer Mile, a 12-ounce beer starts the race and every 400 meters. Any spillage will result in a five-second penalty. The fastest teams advance until the gold medal round.

The best part of training for the Beer Olympic Games is that much training takes place from the comfort of your own couch. Grab a stopwatch, get your preferred brand of beer, put plastic down on the floor and have a plastic bucket ready, just in case. Then chug that bad boy and go for the gold!