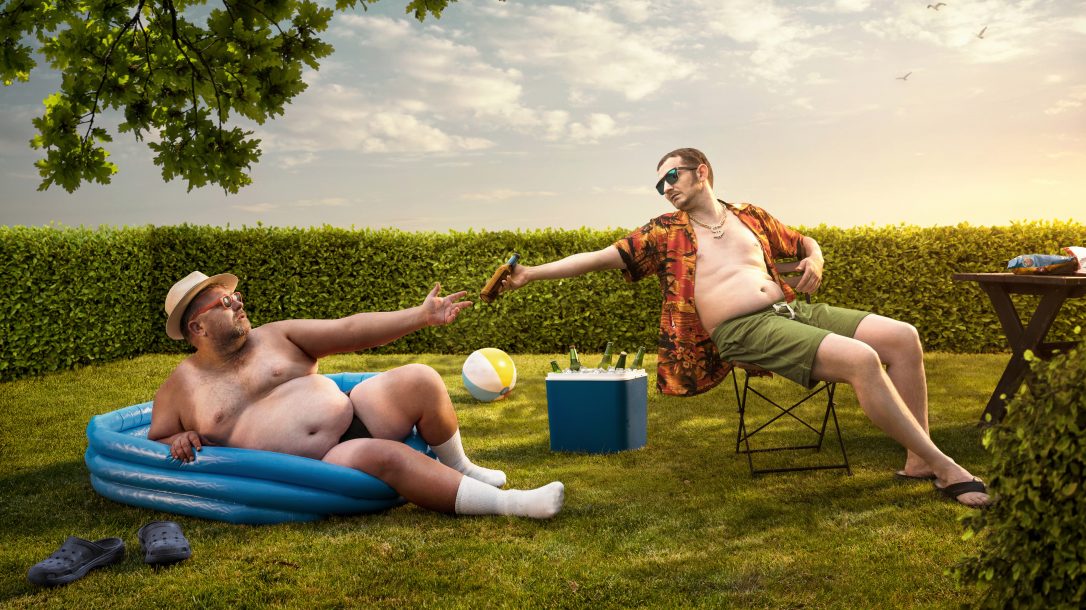 We can argue ’til the cows come home about what the American Dream is, but I like to think it includes the occasional backyard BBQ. One of the best ways to break through the awkward stage of a gathering is to get everyone liquored up and competing against each other—hence the popularity of drinking games. Whether you’re trying to kill time with your roommates or demonstrate your athletic superiority to the neighbors, these backyard drinking games are sure to get the competitive juices flowing and have you feeling nice and toasty. Also, please drink responsibly or at least don’t blame us if you don’t.

This game is simple; teams take turns throwing three darts at their opponents’ beer can. One player throws all three darts, and a player on the other team throws all three back. Then the other partner on the first team takes their turn. The goal is to hit the other team’s can (obviously). Once you do, they have to drink the beer until it’s down to the level of the hole (so, the lower your hit the better). If you puncture the bottom third of the can or hit it twice the other team has to finish the whole thing on the spot. Keep playing until one team finishes three beers (or someone loses an eye).

This one requires slightly more gear, but is one of our favorite drinking games. To start, you need a Frisbee and two poles about 3 or 4 feet in length. PVC and ski poles are good options. Set the poles into the ground anywhere from 20 to 40 feet apart sitting upright and place a canned or bottled beer on top. You’ll be in teams of two for this one, and your teammate will be behind the same pole as you. Teams will then take turns throwing the Frisbee at the other side’s pole. Players must hold a drink in one hand at all times to prevent two-handed catching. Additionally, catching or deflecting the Frisbee in front of the stick is a penalty. Scoring works as follows:

1 point—The throwing team receives one point if the beer is not toppled, but the defending team fails to catch the Frisbee. (No point is awarded if the throw is errant.)

2 points—The throwing team receives 2 points if the pole is hit and the Frisbee or the beer hit the ground, but not both.

3 points—The throwing team earns 3 points if the beer is toppled and both the beer and the Frisbee hit the ground.

This one will either let you relive your high school baseball glory days or completely embarrass you—there is little in between. For equipment, you’ll need canned beer (or seltzer if you don’t mind being made fun of) and a hollow plastic whiffle ball bat. Start by cutting the end off the knob side of the bat and pour a beer into it. Crush the empty can and hand it to a friend who will need to be standing by to pitch.

When you’re ready, chug the beer out of the bat and then quickly place it upright on the ground, set your forehead on the knob and then spin around 10 times. After the 10th spin, you have a maximum of 3 seconds to face the pitcher and right yourself with bat in hand. The pitcher will underhand toss the can to you, and it’s your time to shine. Solid contact means it’s the next guy’s turn. A whiff or a foul tip means you have to go again immediately.

Childhood fun mixed with legal drug use—you can’t beat it. For this one, you’ll need a table, some Solo cups and a two-person-wide slip and slide (two separate ones would be even better to avoid collisions). You’ll need two even teams of any number. The game is regular flip cup with a summertime twist. Both teams will start on one side of the slip and slide with the table and cups on the other. There should be one full cup for each player on the table. Each team’s cups should be in a row on opposite sides of the table to avoid confusion.

Each team designates who will go first, and then they’re off to the races. From the starting point, players sprint a short distance, slide down the slip and slide and run to the table. They drink their cup, put it face down on the edge of the table and flip it with their finger until it lands upright. Once that task is complete, the next player makes their way down the slip and slide and does the same. The first team to finish and flip all their cups wins.

For this one, you’ll need two teams of two, a beer pong table and canned or bottled beer. Each team starts on opposite sides of the table with an unopened beer on the corner in front of them. Teams take turns throwing a ping pong ball at the opposing players’ beers. When you hit one, “ding,” you can crack your beer and start chugging. As soon as someone on the other team tracks down the ball, throws it back to their teammate and it’s touched to the table, you have to stop drinking.

The game is won when one team has finished both of their beers. Once a partner has finished their beer, the other partner will throw every turn. To prove your beer is finished, you must turn it upside down over your head. If so much as a single drop falls out, you start over with a new beer.