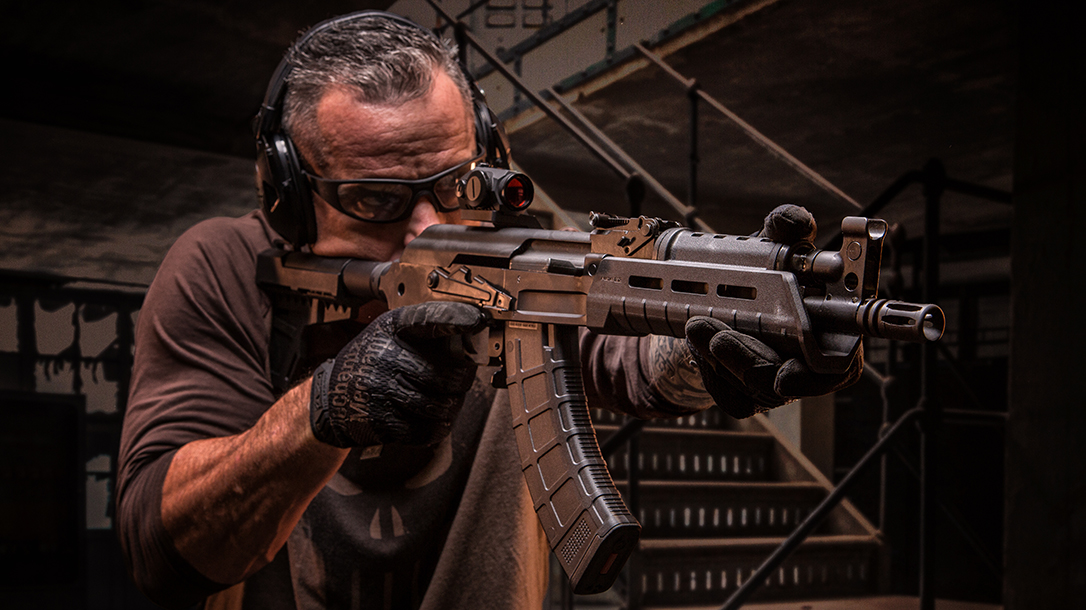 Few things are as recognizable worldwide as the profile of the AK-47. Despite being relatively sloppy and inaccurate, the AK has been used in more conflicts and has killed more people than any other weapon design on earth since its creation in 1947. Gangsters, child soldiers, legitimate militaries, mass shooters, recreational shooters and everyone in between have used this weapon system—often to devastating effect. The AK and its variants are now produced on every continent except Antarctica, and you would be hard pressed to find an armed conflict within the last 50 years where at least one side hasn’t been toting AK-47s.

Given that many assault rifles with superior performance have been made since the advent of the AK, we are left to wonder how it is possible that this weapon became so ubiquitous. Upon further inspection, we discovered that it was a cocktail of this weapon’s unique attributes as well as practical and historical factors that have led to the AK’s success. For one, despite its flaws, the Kalashnikov has many undeniable strengths, especially for cash-strapped militaries and ragtag militias. Second, after its creation, a medley of historical events and Soviet and U.S. foreign policy decisions allowed the AK-47 to distinguish itself, leading to its widespread proliferation. Finally, after years of service in most of the world’s major post-World War II battles, the AK-47 has grown beyond being just a tool and into the status of a cultural symbol.

During World War II, military tactics started to grow into the technology available. Gone were the days of trench warfare, and mechanized war machines, smaller troop divisions and fire-and-move tactics superseded the ways of World War I. However, for most of World War II, troops on all sides carried either long-barreled, high-velocity rifles in bolt or semi-auto action or compact submachine guns that fired pistol rounds. The former were difficult to fire while moving due to size, weight and recoil, and the latter were useless past 100 yards or so.

Therefore, Nazi engineers toward the end of the war saw the potential for an intermediate infantry rifle to better meet the needs of the modern soldier, and they developed the StG 44. The StG 44 fired a shortened, lower-velocity rifle round than the full-size infantry rifle the German army had been using. This meant that the weapon was lighter, troops could carry more ammo, and the weapon’s range still far exceeded that of a submachine gun. The StG was tested in moderate numbers on the Eastern Front during the Nazi invasion of Russia, and Soviet T-34 crewman Mikhail Kalashnikov saw its effectiveness firsthand.

Seeing that Nazi troops were able to move quickly, provide suppressive fire and switch to select fire for relatively accurate shots out to 300 meters convinced Kalashnikov that this new assault-style rifle was the wave of the future. He went to work on creating a version for the Soviet army as soon as the war ended. By 1947, he had come up with the iconic AK-47. The gun initially fired a shortened version of the 7.62x54mm Mosin-Nagant round. The new 7.62x39mm round it was subsequently fitted for was less powerful but much lighter, and it was still effective at the maximum range most soldiers can accurately shoot with iron sights.

Kalashnikov’s design was so well received that his competitors dropped out of the push to produce an assault rifle for the Soviet military. However, the original AK-47 did have some design flaws that had to be ironed out before the weapon could take over the world. First and foremost, the original AK featured a milled steel receiver, which took too long to produce and made the weapon unreasonably heavy. Nevertheless, by the end of the 1950s, the AKM, which featured a foldable stock and a much lighter and cheaper stamped metal receiver, began production, and the rest is history. Today, roughly 90% of the AKs out there are this modernized version of Kalashnikov’s original design.

If you ask any firearms expert, they will tell you the strengths of the AK are its durability, ease of use, low cost and power. The Russians have a history of making weapons as cheaply as possible. Everything about the AK series rifles, especially the AKM, is geared for cheap mass production. Parts are stamped rather than milled metal, they fit together loosely—meaning there is a large tolerance for error in their production—and the design is simple and made of just a few big parts.

This means that AKs can be produced almost anywhere with relatively unsophisticated machinery. In some countries, the price of a fully automatic AK is less than $50. The gun’s simplicity of design also lends itself to ease of use. An illiterate child soldier can reasonably expect to learn how to aim, fire, take apart and reassemble his AK in an afternoon. Will he be accurate with it? Of course not, but he will still be deadly. The AK’s .30-caliber round is immensely powerful compared to the 5.56 NATO round, albeit less accurate.

Finally, and most importantly, the AK is probably the most durable infantry rifle of all time. The same reasons that make the gun inaccurate, cheap to produce and easy to operate make it incredibly soldier proof. It has very few moving parts and wide gaps between them. Likewise, a noncorrosive chrome lining on the action and barrel means that you’d have to try to jam this gun, and even then, you probably couldn’t. It will fire underwater, submerged in mud, buried in dirt, rusted over, etc. These facts make the weapon ideal for use by relatively untrained soldiers with limited resources.

After World War II, the first chance for the AK-47 to make its mark was the Vietnam War. The Russians supplied the Viet Cong and North Vietnamese Army with AK-47s, and our troops carried early M16 variants. Of course, even modern M4A1s aren’t as durable and jam proof as AKs, but the 1960s M16s were not even in the same ballpark. The jungle conditions in Vietnam were notoriously wet and muddy. Dropping your M16 in the mud meant you were useless in combat until you could find a spot to carefully clean and oil it. However, dropping an AK in the mud meant literally nothing. That, coupled with the fact that the Vietnamese used a lot of guerilla ambush tactics, meant that the weaknesses of the AK didn’t matter, and its strengths were evident for the world to see.

This strong showing made AKs quite popular. By this time, Russia was already supplying AKs to all its allies. And, surprisingly, in some cases, so were we. During the Soviet–Afghan War, the AK made waves among mujahedeen soldiers. After picking them up off Russian dead, they liked them so much that they asked to purchase some from their biggest financial backer, the United States. The CIA sold them an array of weaponry, including thousands of Chinese AK-47s.

Since this conflict, nearly all fighting that has taken place in the Middle East has featured AK-47s. By this time, the Soviet Union was supplying guns and production rights to anyone who would have them. When the Soviet Union collapsed in 1991, vast arms deposits went missing, never to be seen again.

Beyond being a useful tool for legitimate, low-budget armies, the AK’s strengths have made it a favorite of criminals, pirates and terrorists. The Vietnam War and the Soviet–Afghan War proved the effectiveness of the weapon but also made it the defining arm of the underdog warfighter. After its success in those conflicts, it was the weapon aspiring guerilla armies and terrorists wanted most of all, and it was also the easiest for them to get.

The use of the AK by groups such as these at the exclusion of every other weapon has made the AK the ultimate symbol of insurgency, anti-Western sentiment and underdog forces in general. Egypt erected a massive concrete statue of an AK muzzle with a bayonet fixed to it. Mozambique’s flag bears an AK silhouette, and rappers wear diamond-studded AK-47 necklaces. The weapon is so popular at this point that it is even a favorite of American recreational shooters. This mystique has no doubt played a role in the wide and continued use of the AK.

The legacy of the AK will forever be that it has killed more men than any other weapon. Even though it has been 70 years since the gun’s creation, it is estimated that more than 250,000 people are still killed every year by AKs, and that number isn’t necessarily decreasing. Mikhail Kalashnikov himself said, “When I saw Bin Laden with his AK-47, I got nervous. But what can I do, terrorists aren’t fools; they too chose the most reliable guns.”

While it is true that Kalashnikov intended the AK to be used legitimately by the Russian military for defense, he was taken aback as much as anyone else by where the rifle spread to and what it became when things were all said and done. Kalashnikov died a Russian hero at age 94, but he nevertheless expressed regret in his later years for his part in creating the deadliest weapon man has ever produced.