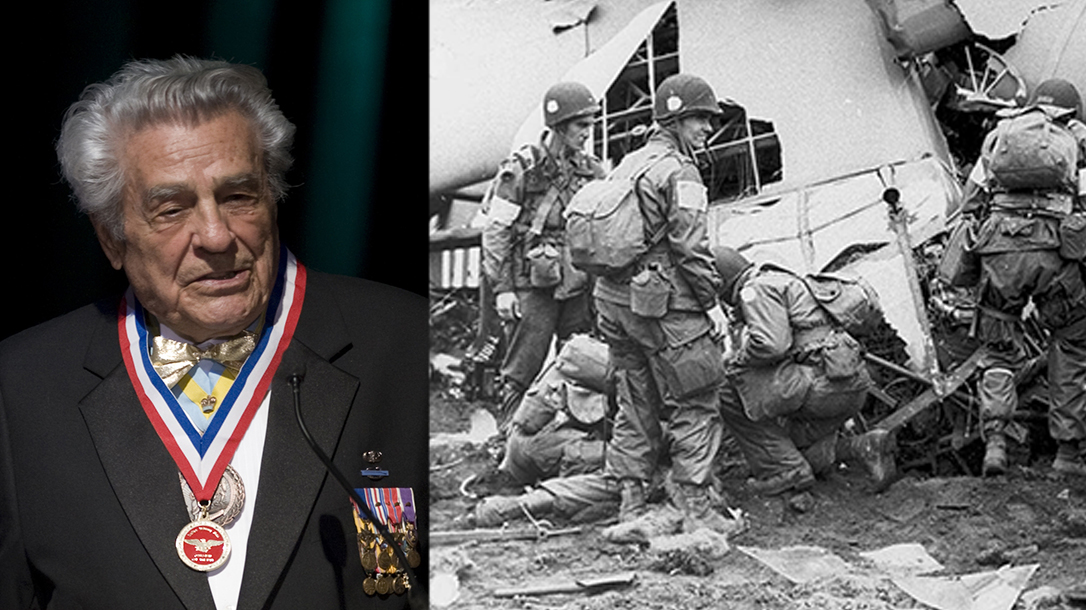 A dead German’s journal described a fierce American airborne enemy capable of striking anywhere and anytime as the “devils in baggy pants.” That enemy was the 504th Parachute Infantry Regiment of the 82nd Airborne Division, and no other paratrooper was as efficient at dispatching Nazis as bilingual Lt. Col. James “Maggie” Megellas, the son of Greek immigrants and recipient of the Distinguished Service Cross, two Silver Stars, two Bronze Stars and two Purple Hearts. He became the 82nd Airborne’s most-decorated officer.

When the ramp dropped and their boots splashed into the saltwater, Megellas’ men met German dive bombers unloading all munitions onto the beaches of Anzio and small arms fire ripping into the paratroopers. The men splashed, swam, ran, rolled and crawled to get to cover. Megellas and H Company dug in and did their best to survive one of the longest ongoing volleys of Axis-versus-Allied artillery of World War II, and it led to the loss of three-fourths of H Company.

During a break in the artillery barrage, Megellas led several others into a platoon of Nazis, sending a swarm of American bullets into their bodies and forcing the enemy to flee, but not before shrapnel shredded a section of Megellas’ left arm and some of his men were injured. They realized that they were now surrounded by a much larger German force.

One Life, One Chance

Always leading from the front, Megellas and another soldier low-crawled under the enemy overwatch and dragged a deceased paratrooper back into their perimeter. Eventually, they extracted back through the Germans and avoided artillery explosions while getting the wounded to a field hospital. Megellas survived, and after a period of recovery, he returned to his unit to be awarded a Purple Heart and the Bronze Star and to prepare for “Operation Market Garden,” the massive airborne drop of paratroopers 57 miles behind enemy lines in Holland to seize strategic bridges.

Six sister C-47 airplanes were engulfed in flames and plummeting to Earth while bullets ripped through the sides of Megellas’ plane and into two of his men. Within thirteen seconds, the entire stick of paratroopers had exited the door, including Megellas, and they floated the remaining 400 feet to the ground. The unit rallied and in record time secured their first objective, but afterward, they had to face crossing the wide Waal River.

Equipped with only 26 flimsy, 19-foot canvas and plywood boats, the paratroopers squeezed 15 men and equipment into each boat and ventured into the flowing water of the river under a blanket of smoke. In the rush to get the boats to the paratroopers, a British unit did not pack enough paddles. The 82nd were forced to use the stocks of their rifles and their palms to push, pull and paddle their way across 400 yards of open river water.

Unfortunately, the smokescreen quickly dissipated, and the fortified Germans sent a fury of firepower into the unprotected boats. Even the men who could not swim swallowed their fear and silently hoped the squall of shrapnel and bullets would not strike them. Only 13 boats made it to the bank while the others floated downstream full of fallen Americans.

Once on shore, Megellas and his men sprinted to an embankment where he bandaged a wounded soldier. He then ran, yelled and fired into the Germans, forcing them to flee or die. Next, they pushed forward to their first bridge and, on the way, linked up with other infantry companies and a British armor unit. These combined forces ferociously fought and killed over 250 Germans and seized the bridge.

Megellas and his men then moved toward their second bridge. Taking the point position, Megellas stealthily led his unit across a field of protruding German helmets. As he approached each German foxhole, he tossed in grenades. At the last visible position, he killed the Nazi soldiers with his Thompson submachine gun. During this blitz, Megellas even slung an injured paratrooper over his shoulder and carried him back to receive medical aid. When silence fell, 17 Nazis lay dead and six prisoners captured For his actions in Holland, Megellas was awarded the Distinguished Service Cross.

During the early stages of the Battle of the Bulge in the Cheneux area, Megellas’ platoon was separated from his company in a safe, well-concealed location. At this point, an unsuspecting, eight-man German artillery team dug a position beside them. After giving the silent signal, Megellas and his crew opened fire, killing the entire German team. Then they scrambled to extract as enemy bullets and mortars showered them, striking one paratrooper in the leg. Megellas shouldered the soldier and continued sprinting to the safety of a hill inside his company’s perimeter. For his valor and life-saving actions that day, Megellas received the Silver Star.

During this grim phase of the war, the 82nd dug in and held their perimeter. Waves of screaming and charging Nazis killed by the paratroopers. They held their ground and made all attempts to survive the artillery rounds raining down on them for days in late December. The following month they left their holes and pursued the enemy during the coldest Belgium winter in 20 years.

The Pursuit Of Soldiers

After pushing forward through knee-deep snow and sleeping in small spurts with nothing more than their uniforms for warmth, Megellas’ unit made it to the outskirts of Herresbach, Belgium. There, they linked up with two tank destroyer units and moved toward the town, only to find themselves caught between two columns comprised of hundreds of Germans. Megellas led his men with their guns blazing straight into the clusters of Nazis. As the bodies fell in the snow, the company of paratroopers pressed through to the other side, completely decimating the enemy. When the last American magazines ran empty, approximately 200 Nazis lay dead and 300 captured.

Following this action, Megellas and his men went on the move again into Herresbach. There they found themselves under attack by a German Mark V tank’s machine gun. They took cover and became pinned down. Megellas traversed from tree to tree while skirting the road along the wood line to flank the tank. He threw a C4 Gammon grenade that destroyed the track, and then he leaped onto the turret and slammed another grenade through the hatch, killing the entire crew.

After the sun had set, they cleared the town building by building under the cover of darkness. With his unit low on ammo, Megellas removed a machine gun from a tank and ordered one of his sergeants to carry it while firing from the hip when they entered each building. Dozens of enemy soldiers surrendered. Megellas’ men survived the Herresbach assault without any casualties. Later credited with killing 25 men in Herresbach and awarded the Silver Star for his actions.

Megellas spent his final days in Europe liberating a concentration camp and cruising the streets of Cologne on a motorcycle wearing a handlebar mustache and enforcing the curfew after the Nazis had surrendered. He safely returned home with captain’s bars on his collar and the title of the most-decorated officer in the 82nd Airborne Division. On April 2, 2020, James Megellas passed away at the age of 103, but not before he had written his autobiography, All the Way to Berlin: A Paratrooper at War in Europe.