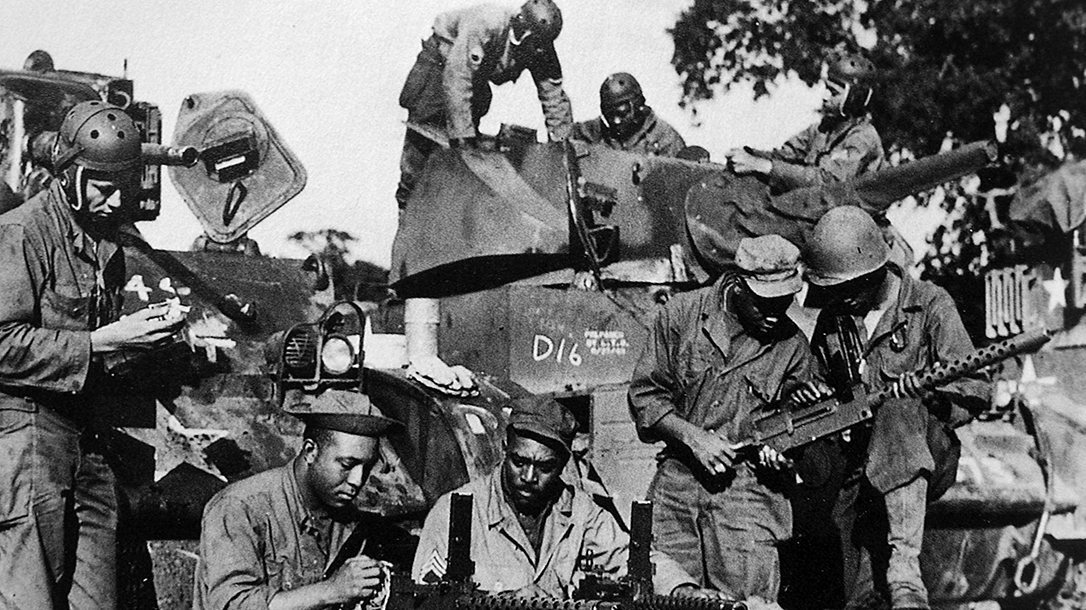 With shrapnel shredding skin, bullets breaking bones and trenches trapping tanks, the 761st fought furiously for their first days in combat during the latter stages of World War II, spearheading General Patton’s push in the fall of 1944. For 183 consecutive days, this highly motivated unit of Panzer punishers rolled through six countries, killing and capturing Nazis at an exceptional rate. This unit of 700 tankers suffered 34 killed in action and received 296 Purple Hearts, 70 Bronze Stars, 11 Silver Stars, one Presidential Unit Citation and one Medal of Honor, and they were also the first African American armored unit to fight in combat. They were the 761st Tank Battalion, known as the Black Panthers.

Warren Crecy seldom ate or slept, and, during night hours, he snuck out of his tank armed with an M1 Garande rifle he confiscated from a decedent on the battlefield and conducted his own recon forays into German villages. Engaging in part surveillance, part search-and-destroy missions, he travelled undetected, developing actionable intel for future missions and leaving a few unsuspecting Nazis to be discovered dead at sunrise. Crecy’s will to win and his complete courage under fire earned him the moniker Iron Man. After a violent firefight early in their deployment, Horatio Scott, Crecy’s friend, had died of his wounds. Iron Man vowed vengeance on every Nazi from that day forward.

While entering Salival, the earth exploded around the Panthers. With half of his Sherman shattered, Crecy dismounted, sprinted to an unoccupied jeep and drove it directly toward the enemy. This allowed an infantry unit to flank and eliminate the threat. Crecy returned to his crew, rallied them and then moved on foot to acquire an empty Sherman tank. Soon after, the tank became immobilized in the mud. He dismounted again to clear the tracks as rounds were impacting around him. The grunts were stuck out in the open when Crecy laid down fire, causing enemy retreat.

Fighting through Lorraine, Saar and several other towns until reaching the Ardennes forest, Crecy and fellow Panthers Leonard Smith and William McBurney again engaged the enemy. Crecy fired his .50 caliber, and the other two worked 76mm cannons, destroying three machine gun pits and killing 14 enemy soldiers. They were now in the Battle of the Bulge against the 11th Panzer Division, during the worst winter in three decades.

On December 31 at midnight, Patton gave the Germans a welcome to the New Year with all artillery firing at once, causing massive casualties to the Germans and setting the tone of American defiance and determination. On New Year’s Day, the Panthers pushed to capture roads and supply routes from the elite Panzer Lehr Division, fighting them turret against turret. With casualties and the deceased tied to their hulls, the tankers worked to medevac under an onslaught of enemy artillery. Dismounting their burning tanks with .45-caliber submachine guns in hand, several Panthers joined the grunts of the 87th Infantry.

The remaining Panthers now battled the most fanatical of Hitler’s Russian-killing, battle-hardened Führerbegleitbrigade. The enemy unleashed hell with their “screaming mimi” rockets, descending destruction all around the 761st and the 87th Infantry. While losing lives, they held their ground in this tide-turning battle.

During one of the early battles, Smith’s tank, “Cool Stud,” fell prey to a tank trap, a camouflaged trench designed to stop tracked advancements. These traps often blocked the tank’s exhaust system, causing carbon dioxide to fill the cabin. Smith was the first to pass out and Cool Stud’s crew put him on top to get air. Sprawled across the turret and covered in a fellow soldier’s blood, Smith awoke to Germans speaking, and he slowly realized the enemy was all around him. Remaining still and appearing lifeless, Smith waited until nightfall and then slid down into the hull, secured the hatch and slept until morning. He awoke alone with no other living being in sight. Unarmed and still confused, he dismounted. Then, from nowhere, a dazed Nazi stumbled up to him and surrendered his rifle. Smith marched him at gunpoint down the road until they met fellow Panthers.

In sub-zero temperatures and fighting several feet of snow, the tankers continued rolling through the frozen terrain. Smith and McBurney’s tanks were leading infantry soldiers when they were caught in the open by a snow-covered German Mark IV and bracketing enemy artillery. The Panthers were firing and loading as rapidly as possible while negotiating the field when they detonated a mine. Trackless, they abandoned the iron coffin and were greeted by direct fire from Germans. German forces continued their barrage on the Black Panthers, who were firing their submachine guns while sprinting.

The Mighty War Machine Is In Full Swing

McBurney, Smith and Panther Teddy Windsor continued running in the snow, fleeing the onslaught of the Germans. Smith kept them motivated to fight on, kill Nazis and survive the finger-freezing temperatures. The three negotiated miles of running, walking and crawling, making it back to U.S. Forces as artillery continued to rain down, exploding on plots of land they had just traversed. Machine gun fire raked the air and snow around them while a German Panzer zeroed in. It was gaining ground by the second until a lone P-38 dipped from the sky and destroyed the Nazi tank.

For the fighting in Tillet, Belgium, the 761st helped the 87th Infantry Division as well as 17th Airborne Division by destroying antitank weapons, killing approximately 50 Germans and capturing a squad of enemy soldiers.

The fighting during the Battle of the Bulge reduced the 761st to fewer than two dozen Sherman tanks. Patton and the Black Panthers now had their eyes on the Rhine, Hitler’s sacred river of final defense.

Break Down The Walls: Liberating A Concentration Camp

The 761st quickly found itself on point for “Task Force Rhine,” maneuvering mine-laden roads and fields and, at times, being led by officers on foot who cleared a safe path of travel. Several lead tanks were damaged by detonating landmines while attacking German artillery positions and gun nests.

After a break in battle, the units regrouped and Task Force Rhine, led by the 761st, conducted a night invasion. They continued firing on any movement and triangulating on enemy muzzle flashes in the dark. German 88mm artillery began to whistle down from the sky, and the commander was left wounded on the ground. Crecy, as he had done so many times before, quickly dismounted and sprinted to assist the commander to safety. The Panthers pressed on, clearing out entrenched but battered German soldiers. The fighting continued, until the Germans either died, surrendered or fled. The Panthers reigned victorious, breaching the line along the Rhine while General Patton—in ultimate disrespect for the Führer—stood on a bridge and drained his lizard into the waters of Hitler’s sacred river.

The 761st Tank Battalion Rolls On

The 761st then rolled onward, encountering SS troops, and, within three days, these elite Nazis had surrendered. Pushing farther, the tankers drove down the Autobahn, destroying Luftwaffe planes that were using the roadway as an airstrip.

They continued rolling through towns until Smith and McBurney cleared an enemy position near a compound. Using the tank as a battering ram, McBurney knocked down the wall of the complex, exposing emaciated figures . As some of the first Americans to liberate incarcerated Jewish citizens in a concentration camp, the Panthers became eyewitnesses to the atrocities of the Nazi war machine’s campaign of genocide.

They continued moving forward at the request of their commander, and, after witnessing the horrors of the camp, the Panthers directed their fury at an evil enemy. Next, after assaulting an airfield and destroying airplanes and squads of infantry, the Panthers secured this site and then hit the woods line. It was becoming apparent that the Nazi resolve was breaking. On May 5, 1945, the 761st celebrated the defeat of the German Army, and their 183 days of rolling battle.

Iron Man Crecy was commissioned to second lieutenant and remained in Europe guarding Nazi prisoners for the Nuremberg trials. Later, during the Korean War, a mortar blast destroyed his jaw, but he survived to retire. Leonard Smith served with the New York City Transit Police for 25 years, once again breaking color barriers. While on patrol, he kept an eye on a young Kareem Abdul-Jabbar and provided sound advice to him. Abdul-Jabbar returned the favor by spending years researching the history of the 761st. He and Anthony Walton captured the fighting spirit of the Panthers in their book, Brothers in Arms: The Epic Story of the 761st Tank Battalion, WWII’s Forgotten Heroes.

Finally, after years of rejection, the 761st was awarded the Presidential Unit Citation. Not only were all their military objectives, but their actions also contributed to the desegregation of the military itself. The 761st Black Panthers or that they had lived up to their motto: “Come out fighting”!