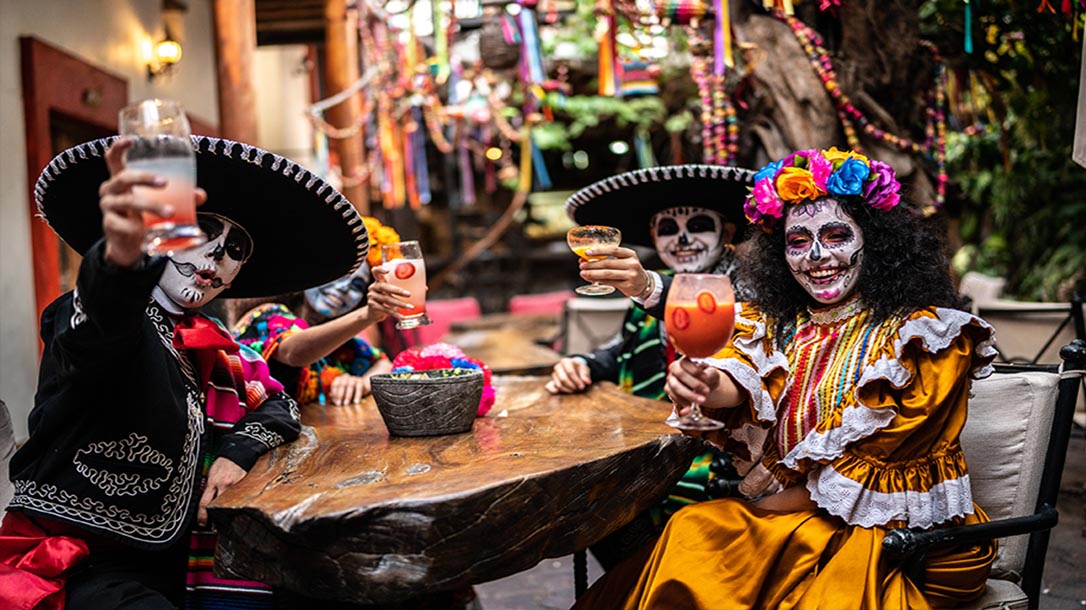 5 Ways To Celebrate Dia De Los Muertos: The Day Of The Dead

Dia De Los Muertos, or Day of the Dead, is traditionally celebrated on November 1 and 2. It originated in Mexico, where it is mainly observed, but is celebrated in other places, usually by people of Mexican heritage. Day of the Dead is a rare holiday for celebrating death and life. It is unlike any other holiday, where celebration replaces mourning.

November 1 is Dia de Los Angelitos or Spirits of the children. Dia de Los Angelitos (Day of the little angels) starts the holiday at midnight on November 1. The spirits of all deceased children are believed to be reunited with their families for 24 hours. Families construct an altar, known as an ofrenda, with the departed child’s favorite snacks, candies, toys, and photographs. This encourages a visit from their departed children. Día de Los Difuntos or Spirits of the adults.

At the stroke of midnight on November 2, the celebrations shift to honor the lives of the departed adults. The night becomes filled with laughter and fun memories. However, the Ofrendas take on a more adult-like theme with tequila, pan de Muerto, mezcal, pulque, and jars of Atole. Families will also play games together, reminisce about their loved ones, and dance while the village band plays in their town. Dia De Los Muertos celebrations continue long into the night. The next day is the grand finale and public celebration of Dia de Los Muertos.

More recently, people have come together in their cities, and have parades in the streets. Cemetery visits are also typical on the last day as families will go to decorate the grave sites. It’s customary to clean the gravestone and restore the color.

An ofrenda is the offering placed in a home altar during the annual Mexican Día de Muertos celebration. An ofrenda, sometimes quite large and elaborate, and created by the family members of a person who has died. Take a cue from a traditional Day of the Dead altar or ofrenda: Have tables draped with long tablecloths and decorated with roses, marigolds, lighted candles, paper fans, and skulls.

Decorate with Skulls, Candles, and Cut Paper. Sugar skulls are folk art made for Dia De Los Muertos or Day of the Dead celebrations. They represent a deceased loved one and are placed on the home Ofrenda or altar on All Saints Day. Sculpted sugar forms, like sugar skulls, are called alfeñique and are prevalent in Italy, Spain, and Mexico. Sugar skulls represented a departed soul, had the name written on the forehead, and were placed on the home ofrenda or gravestone to honor the return of a particular spirit.

3. Visit The Gravesite Of A Loved One.

Families usually travel to the cemetery to spruce up their loved one’s memorial. They first lighten the spirit, or aligerar el espíritu, which means pulling weeds and removing debris from the area before washing the grave marker. Then they beautify the gravesite with candles, flowers (preferably marigolds, which have a smell said to attract the spirits), sugar skulls, and the favorite foods of the loved one.

Cook your loved one’s favorite dish or food. Spend the afternoon eating, singing, and telling stories about the people you miss. If Grandma liked horchata or your brother appreciated pulque, be sure to fill a thermos. If your loved one likes a drink now and then, leave behind a shot of tequila or his favorite Cerveza.

5. Attend A Day Of The Dead Parade.

The biggest Día de Los Muertos parades are in Mexico, but in U.S. cities with large Hispanic populations, such as San Francisco, California, and Albuquerque, New Mexico. They host significant Day of the Dead parades with music, dancing, and many giant skulls and skeleton costumes.

Those who celebrate the Day of the Dead view death as a welcomed part of life. Day of the Dead is not the “Mexican Halloween”. The two holidays originated with similar afterlife beliefs but are very different today.

Halloween began as a Celtic Festival where people would light bonfires and wear costumes to ward off ghosts. “Day of the Dead is a holiday to remember loved ones, as one would when they were alive.”