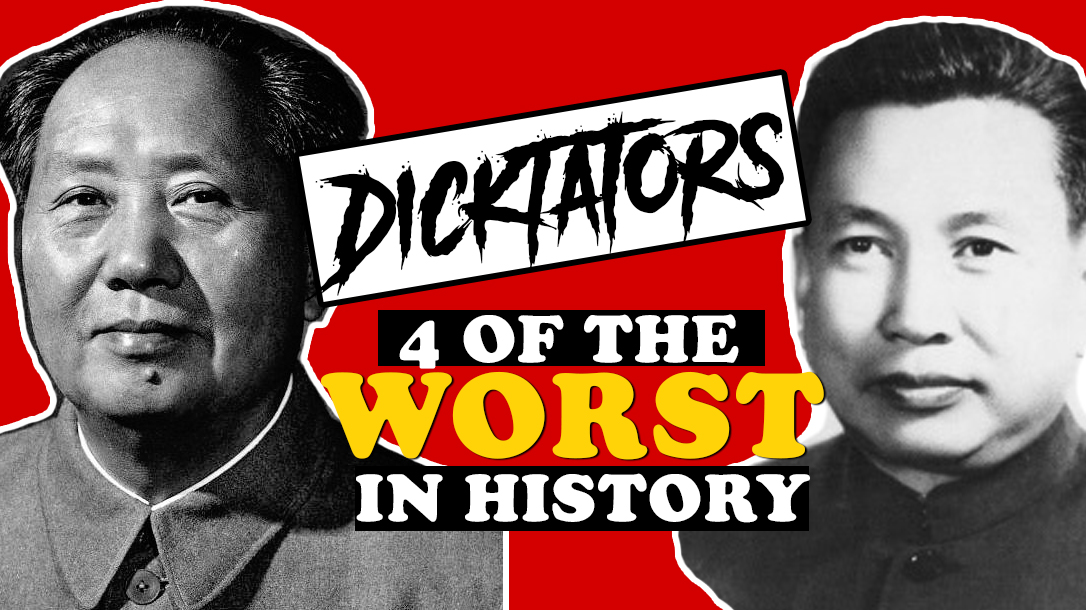 “God is dead. God remains dead. And we have killed him. How shall we comfort ourselves, the murderers of all murderers? What was holiest and mightiest of all that the world has yet owned has bled to death under our knives: who will wipe this blood off us?”—Friedrich Nietzsche

Nietzsche penned this now famous quote at the end of the 19th century. He saw the effects the enlightenment and the progression of scientific thinking had had on civilization and knew that a return for people to the old way of gaining meaning through religion was largely impossible. Nietzsche knew that the hole that God left in the world’s societies would either remain empty, meaning dangerous fits of nihilism (feelings of meaninglessness), or filled by totalitarian political ideology. Shortly following Nietzsche’s warning of the death of God, the 20th century unfolded into a bloodbath precipitated by one unbridled totalitarian utopian political ideology after another. The following list details the worst dictators of the 20th century, all of whom promised to replace their people’s god with some worldly utopia and, in the process, scarred the world permanently in their wake.

Mao Zedong led a communist revolution in China in the 1940s, installing the single-party communist system still in power. His reign from 1949-76 also caused the death of more than 50 million people. Early in Mao’s regime he saw a need for China to modernize in order to compete with the world’s most powerful states in the post-World War II era. Given that China was almost entirely a rural agrarian society, this meant bolstering industrial production.

To this end, Mao triggered the first of two infamously deadly five-year plans, “The Great Leap Forward.” The Great Leap Forward involved the complete dissolution of private land holdings. Any moderately successful person was subject to murder and torture in addition to having their assets seized by the state. This included all the most knowledgeable farmers. Rural villagers were moved to large communes where farming labor would be collectivized under state planning and supervision. Mao theorized production would increase and surpluses of food could ship to cities to feed factory workers.

The execution of the plan, however, was a disaster. Loyal party members with no knowledge of farming designed the plans for irrigating and planting fields. The laborers were unmotivated to work as there were no incentives for excelling. Orders handed down to kill all of the area’s birds to limit seed loss which led to an herbivore pest problem. Fields remained undermanned due to the creation of rural factories that ended up producing unusable steel.

Even once it was clear everything was going wrong, no regional party members would dare warn of the coming crisis for fear of being deemed disloyal and being put to death or sent to a forced-labor camp. What ensued was the worst famine in recorded human history. In some communes almost 50% of people died of starvation as Mao continued to ship food away from starving villages to city centers. All told, The Great Leap Forward killed some 45 million people between starvation and the mass murder of dissenters.

Having caused such a disaster, Mao lost his hegemonic position but remained in the party’s leadership. A few years later in 1966, Mao moved to recapture dictatorial power in China through what is now called the “Cultural Revolution.” Mao claimed traditional Chinese culture as well as capitalism and bourgeois elements had not been adequately stamped out. He advocated for a violent class struggle to remove them. Mao successfully targeted young people and created a political army of 14-24-year-olds called the Red Guards. The Red Guards followed orders to beat, publicly humiliate and murder teachers, intellectuals and anybody suspected of disloyalty to Mao and the communist party. Millions were murdered or imprisoned, and countless cultural artifacts were destroyed. The wold had experienced one of the worlds worst dictators.

Pol pot was born to a moderately wealthy land-owning family in Cambodia. His good fortune and French colonization in Cambodia allowed him a scholarship to study at a university in France. This is where he was first exposed to the Communist ideology. In 1975, Pol Pot managed to capitalize on political instability related to a U.S.-backed coup. He teamed up with the reigning prince and won Cambodia’s civil war before ousting the prince. He then installed himself as the hegemonic dictator. Once in power, Pot’s Khmer Rouge took drastic measures to force a reorganization of Cambodian society.

Although both were communists, Pol Pot’s goals were not modernization, like Mao’s were. Instead, he wished to turn Cambodia into an entirelyegalitarian agrarian society. This meant rounding up every educator and educated person, every land owner, every religious person, every ethnically non-Cambodian, every business person, and all elements of the previous government and military and enslaving them and eventually systematically murdered.

The Khmer Rouge had numerous prisons throughout the country, most manned by teenagers similar to Mao’s Red Guards. In these camps prisoners experienced torture, starvation and daily experimentation. Once prisoners confessed to whatever crime the prison’s commanding officer desired. Taken to the now infamous “killing fields”, and killed with pickaxes to save ammunition. The famous Nazi concentration camp Auschwitz had a survival rate of about 10%. The Khmer Rouge’s prison S21 had 20,000 individuals pass through and only seven survive. At the conclusion of this dictators reign, one quarter of Cambodia’s population lay dead in mass graves.

Stalin didn’t found communism in his country, but he did ramp things up a few notches. Known for his brutality and competence during the Bolshevik Revolution, Stalin took power by murdering all of his political opponents. Stalin became known for extreme paranoia. Constantly worried of being overthrown, he had high-ranking party members executed for treason with no actual evidence. He also created an atmosphere where everyone within a given family, social or military structure would be expected to inform on their peers for any kind of misconduct.

One of Stalin’s most lasting legacies was his proliferation of Gulags. Forced-labor camps called Gulags, featured utterly brutal conditions. Prisoners sentenced, most often with no trial, to imprisonment in Siberia where they would work 14 hours a day, seven days a week. They were subject to starvation, hypothermia and violence from guards or other prisoners commonly in the form of rape and cannibalism. From the time Stalin took power to his death, almost 20 million people came through the Gulag system, including political opposition, party members deemed incompetent, murderers, thieves, rapists and many innocent and loyal Soviet citizens.

Dictators and Their Relentless Rule

In a fashion Mao would follow almost to the letter later on, Stalin implemented a plan for increased industrial output in the USSR in 1929. He planned to do so by first demonizing a class of relatively successful land-owning peasants called Kulaks and eventually “liquidating” them. This meant any peasant with more success than another became labeled a Kulak. As such, their whole family was dragged out of their home in the middle of the night and shot or shipped to separate Gulags across Siberia.

About 2 million Kulaks ended up murdered, deported or imprisoned. Stalin moved to create collectivized farming communes when private land ownership was no more. Since he killed all the best farmers and had only peasants to till the fields, food production floundered. When Stalin’s collectivized farms failed to meet production goals, he punished them by confiscating what grain they had left. What followed was one of history’s worst famines. About five million Soviet citizens starved to death in the Ukraine, which was around 15% of the population.

Similar to the communist dictators on our list, Hitler pedaled dreams of a utopian society just on the other side of necessary evils. Rising to power democratically, Hitler preached the hardships ethnic Germans (the master race) faced at the hands of a shadowy Jewish cabal. He captured an extremely fervent following and was eventually able to oust all competing interests in Germany’s government and install his hegemony. The Nazi’s single-party state, dubbed the Third Reich, was socialist economically but placed emphasis on racial and ethnic pride, purity and supremacy over all else, which differentiated it from communist regimes. In addition, many forms of private ownership were still allowed as opposed to the totally collectivized economies discussed earlier.

Hitler perpetrated one of the worst genocides in human history. He systematically killed over six million Jewish men, women and children in highly industrialized death camps. Nazis also rounded up and executed homosexuals, Germans with disabilities, and communists, as well as many religious and political dissidents; either that, or they forced them into concentration camps. The Nazis used ideology to characterize vast swaths of people as subhuman. This allowed them to persuade their troops to perpetrate heinous abuses on concentration camp prisoners. This included mass execution by gas chamber and firing squad, unprecedented human experimentation and mass starvation.

Read more on the armies that defeated the worst dictators in history here. Pick up a copy of our magazine at OutdoorGroupStore.com and keep up with us on Facebook!