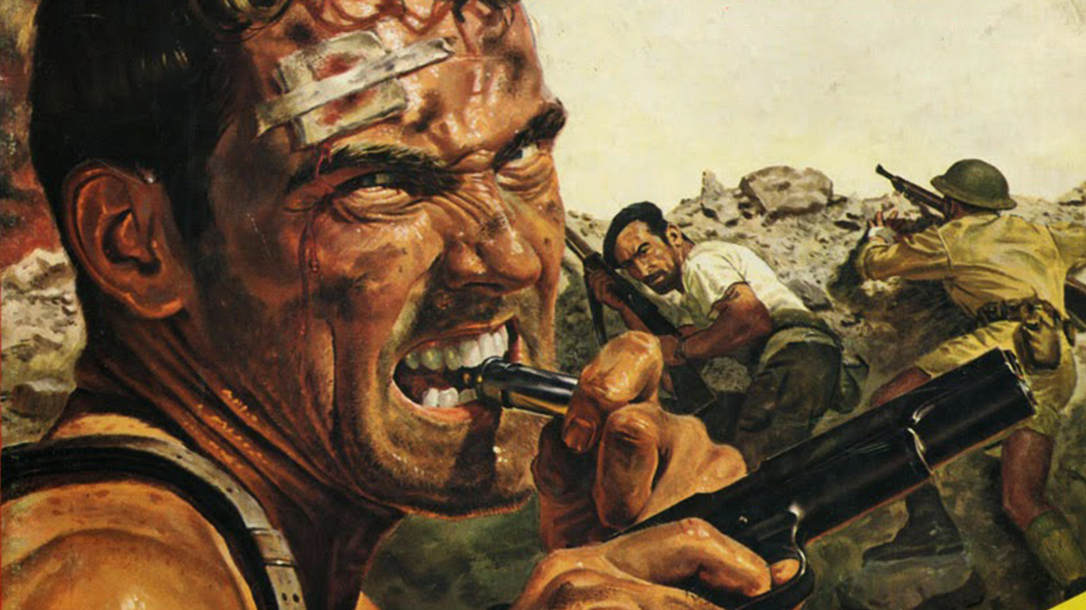 Get Off My lawn

We’re not talking GQ, Maxim or Esquire, but instead titles that left nothing to the imagination, like Complete Man’s Magazine or True Men Stories or All Man or my personal favorite (for obvious reasons), Stag.

The publishers didn’t try to mine focus-group-driven demographic data to determine their audience. The editorial staff knew who they were after: Men. Real men. Guys who were just coming back from war or who were headed back into it. Guys who were away from their families, girlfriends and wives, who wanted nothing more than to feel like a man in an environment that was trying to rob them of their souls. They wanted to be transported back into the shit and to read stories about survival and sweat and combat and conquest.

These men’s magazines of the 50s and 60s offered the perfect respite from life’s drudgery. Packed with heroic stories of war or more salacious articles like the “‘Private Love Club’ Girls of London.” Ads for well-paying jobs like meat cutting (“People Must Eat!”). These magazines went straight to the heart of what drives men to be only slightly-better-dressed cavemen. Action, adventure, women, fighting, danger, lust and an unwavering addiction to being a proud American.

The covers of these magazines were absolute works of art, typically depicting pulse-pounding scenes such as an outdoorsman shooting bloodthirsty wolves trying to attack his downed horse, a sailor rescuing crewmates from Nazis, or a swimmer beating a shark to death with a raft paddle. Many of the publications featured artwork depicting the age-old damsel-in-distress with an imminent rescue by a Burt Lancaster-meets-Paul Newman type. The foes didn’t matter — Nazis, bloodthirsty Mongolians or Pacific Island natives. What these stories had in common was that they raised the heart rate of the reader.

When the top brass of Skillset sent me a care package with a stack of these magazines labeled, “For Research,” they had no idea that I was already a fan. Before I unwrapped them I could smell the musty pages that instantly transported me back to my grandfather’s basement, where I first saw some of these rags. There was a stack there against a back wall sitting in a wooden apple crate wedged between the oil tank and a table saw.

Sometimes I would sneak down and leaf through them, not really understanding what I was looking at, but nonetheless fascinated by the pictures. I mean, how is an eight-year-old supposed to understand the subtle intricacies of article titles like “Nude Love Slaves of the Master of Pain”? I got to see barely covered boobs on the covers and that was enough for me. (The “Playboy” stash would be uncovered in my teens — that was a different level of reading comprehension.)

Decades later, I still remember the impact of some of those covers, and this treasure trove that arrived in the mail was a perfect walk down memory lane. I fell into the articles and pictures again, completely consumed by them.

As a full-time photographer, the cover images blew me away and I wanted to find out more about the artists who designed them. Research kept leading me back to Mort Künstler, an illustrator and artist best known for his historical, war-themed pieces. However, Künstler started like many of us do, freelancing for jobs as a way to pay the bills. In the 50s and 60s this meant illustrating the covers for many of the men’s pulp titles. Want a man depicted fighting a shark? Künstler was your go-to guy.

Norman Saunders was also very well known for his illustrations across all men’s magazines, eventually branching out from pulp into westerns and science fiction. Saunders spent time as an MP and as a member of the Army Corps of Engineers during World War II. Perhaps the military experience fine-tuned his skill at creating lifelike fantasy perfectly suited for pulp.

Throughout that period Künstler and Saunders progressed in their careers, prolifically creating works for magazines like National Geographic and Newsweek. As cover art was slowly replaced by photography in the 70s, Künstler shifted directions and became a historical artist, while Saunders worked for Topps trading cards and continued illustrating other fantasy magazines. There were several other artists that helped to shape this era as well, but many were never credited or else worked under pseudonyms so as to not affect their “real” art careers. What they left in their wake, though, was an epic genre of images that sparked the imagination like no photography ever could.

At the time these magazines were being published, the country was in the midst of a cultural shift. Hippies were on the rise, political correctness was in its infancy, and we had Viet Nam looming. These men’s magazines offered a release and a non-PC point of view. Drawn in by the cover art, the men who bought these mags were captivated by their stories that often blurred the lines between fact and fiction.

Inside these 25-cent rags there were no glossy pages or color photos. Each page was filled with black-and-white text on cheap, newspaper-type material. The articles were littered with testosterone-fueled, somewhat realistic fiction. These pieces weren’t exactly an imitation of hardcore journalism — unless you are thinking of that other sort of hardcore. Essentially, these magazines were eighty pages of pulp fodder, laced with sex, adventure, history and menace. The ads were reflections of society at the time, too.

Flipping through them, you could almost picture Don Draper sipping a third martini in his office before noon, dreaming up quick-hit ads that sold everything from love pills to binoculars to early precursors of cell phones. What’s interesting is that all of the same types of ads are still in play today, only the quality of the images and sales copy has changed. Suffice it to say, men are always going to be men, drawn to the same stuff. These magazines just gave zero F’s about subtlety. Remember, they weren’t trying to appeal to Harvard-educated executives. Their core readership were the GIs that had served in World War II or Korea, or who would be going to Viet Nam.

Pictures were key, but in-depth research was not. The heavyweight titles and subtitles were enough to keep the pages turning. One of my favorite patriotic pictorials was simply titled, “Invasion!” It included grainy black-and-whites from Normandy. That would be cool in and of itself, but the subtitle was even better: It can be a platoon carrying M-1s or an Army corps backed by atomic cannon. Once they’re dumped on that beach, an invasion boils down to just plain guts. Guns, guts, military superiority, nostalgia and pride. All the ingredients that would ensure the reader would come back for more.

But once the initial content got the reader’s heart pumping, it was time to send that blood elsewhere. Toward the middle of the magazine were the women. Bikinis, bed sheets, blondes and brunettes — the centerfolds were tame by today’s standards. Remember though, there was no Tinder, Instagram or PornHub for a guy to get his fix. For a quarter, the reader was immersed in a world that catered to his every desire. From Japanese wrestling girls to The Case of the Nude Lady Bartenders. These literary gems also tried to answer medical questions like “What is Sexual ‘Excess?’” (A good question if we’ve ever heard one.) The back pages of the magazines were very much like they are today. A collection of ads, business “opportunities” and promises of better living through consumption. The publishers had the formula nailed.

To Days Gone By

As societal tastes have changed over the decades, so has the content of most major men’s magazines. Impossibly beautiful men living impossibly extraordinary lives are the substance that publishers and advertisers think we want. As a middle-aged man with no kids and a world-class “dad-bod,” I just can’t relate. I want to hear stories from guys with scars that they got in some unknown part of the world. Authenticity is what sells, and a bit of creative license here and there just makes the reading fun.

So, the next time you’re cruising the local bookstore or men’s magazines at the supermarket, take a look at the covers and ask yourself if there is anything actually piquing your interest. Do you really want to learn “7 Secret Tips to Grooming the Perfect Beard?” Or do you want to see a leather-clad biker saving his old lady from the clutches of the Nazi sadists? Yeah, us too.

We like to cover topics like this on our weekly podcast, Skillset Live. You can pick up a back issue of our magazine at OutdoorGroupStore.com. Stay Motivated. 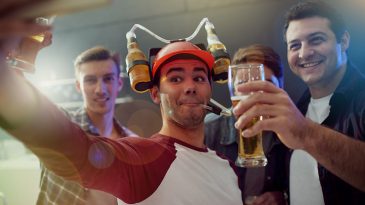 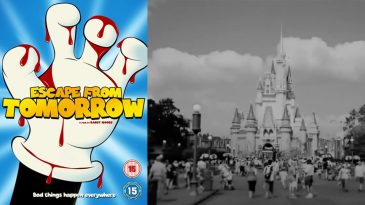 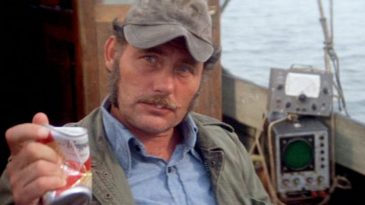